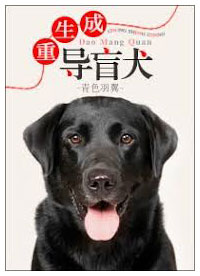 Status in Country of Origin. One entry per line
60 Chapters + 2 Extra (Completed)

Lu Chengye’s dream was to live freely and have fun until he died. Unfortunately, he inherited a company and was worked to the bone!

After finally taking over the company, he had just prepared to begin his carefree life when he was hit by a car and died. His last thoughts were that it would be much better not to be human in the next life.

And so, Lu Chengye was reborn as a Labrador.

One entry per line
重生成导盲犬

These are recommendation lists which contains The Seeing Eye Dog. You should give them a visit if you're looking for similar novels to read. Alternatively, you can also create your own list.
More Lists >>>

The description up top is pretty vague but basically MC (who's the CEO of a big company) gets into an accident and finds himself in the body of a new born puppy. ML (15 or 16 yrs old) buys him from the pet shop and takes him home, and later MC becomes ml's guide dog. ... more>>
Spoiler

There's actually only a two or three year difference between MC and ML because MC went back in time 10 years.

[collapse]
I mtled this so my understanding of the story might not be 100% accurate, but overall mtl was pretty easy to understand. The novel also only has 60+ chapters so it's a fairly quick read. MC and ML are very sweet and the ending is happy but there are some sad moments, especially in the beginning and towards the middle of the novel.
Spoiler

MC notices that ML is going blind fairly early and feels helpless because he isn't able to do anything about it. Ml's family is also pretty dysfunctional and after his dad and mom divorce

His dad learns that ML isn't his biological son

One thing I really liked is that even though MC helped ML get back on his feet, ML isn't dependent on MC.

[collapse]
Also, MC is basically a wife slave who'd do anything for ml's praise, and ML is definitely in charge in the relationship. <<less
9 Likes · Like Permalink | Report

EDITED Okay, I decided to give this novel a second chance after dropping it once, but my rating still stays the same. What first drew me to this novel was the heartwarming interaction of ML and Dahei and what really nailed it in for me was the ML coz even tho he's blind and has suffered so much, he never gives up. He kinda reminds me of the MC from PSWOL who also has sh*t family relationships. But later on, the plot becomes predictable... Heck, it becomes so similar to what happens... more>> in Reborn into a Hamster for 233 Days, except there's less drag and drama I'm still turned off by the slight sexual insinuations between Dahei and ML... but you can pretty much skip over it (I wish I did... I'm still traumatized by that one yuri on ice dj that it reminds me off uuugghhh) Ending was a bit flat, but it ties everything up nicely. <<less
4 Likes · Like Permalink | Report

okay I'm the translator so I mIGHT be biased but hush hush let's get on w/ the review this novel starts off happy, quickly gets sad, then gets happy again. I'm translating as I read and I'm only to chapter 7, but I'm loving it so far! MC is cute, ML is cute, and I absolutely despise all the crap they're going through, I just want my babies to be happy! but, yes. You should read this. Not because I'm the translator, but because it's adorable. edit: I'm the current translator bearly translating,... more>> I'm too lazy to make a new NU account and change the username lmao <<less
4 Likes · Like Permalink | Report

A beautiful and heart wrenching novel. I would highly recommend reading it. Such a beautiful and immersive story. Just like rollercoaster, the author is able to take you on a myriad of emotions—through the ups and downs—touching your core. Though do be careful, you’ll need quite a lot tissue boxes.
3 Likes · Like Permalink | Report

At first, I really hesitated to read it. I’m not fond of human x non-human relationships at all. But like, the story is too damn good!! There is plenty of fluff, but there’s also angst. The characters aren’t stupid and annoyingly naive, instead they’re already quite mature, they grow even more mature after experiencing the ways of the world. I feel very sorry for the ML and what he’s going through, but I know it’s going to get better. The main character becomes a dog after all, I didn’t quite like... more>> it, but that was before I actually started reading the novel.
Spoiler

This can’t really be considered a spoiler since I didn’t MTL, but I have a hunch that the MC will become a human later, it’s just a hunch of mine.

[collapse]
Well, I hope you give this novel a chance. I rarely write reviews, but this is just that good. <<less
3 Likes · Like Permalink | Report

This is becoming one of my fav novel... I have only read until 12 chapters and I fell in love with this (basically when I see the title, picture, and synopsis, I have fallen in love with this novel but after reading 12 chapters, I fall deeper XD) I like their cuteness, relationships, actions and reactions. I am hoping that the story will not become boring because I really like it now... You guys should prepare some tissues cause I believe you will need it :')
3 Likes · Like Permalink | Report

I personally very much enjoyed this novel. The writing and translation is well done and easy to mtl if that is what you are into. Nice and easy novel for those with 2-4 hours to binge. Also bring tissues.
Spoiler

Plotwise, the story is getting better. I love how the story explains the side of shou. His suffering is really sad. I just don't like those hints of bestiality.
0 Likes · Like Permalink | Report
Leave a Review (Guidelines)
You must be logged in to rate and post a review. Register an account to get started.