Novel Updates
RegisterLogin
Theme
Search
Your changes has been saved.
The Pygmalion Is Planting Seeds 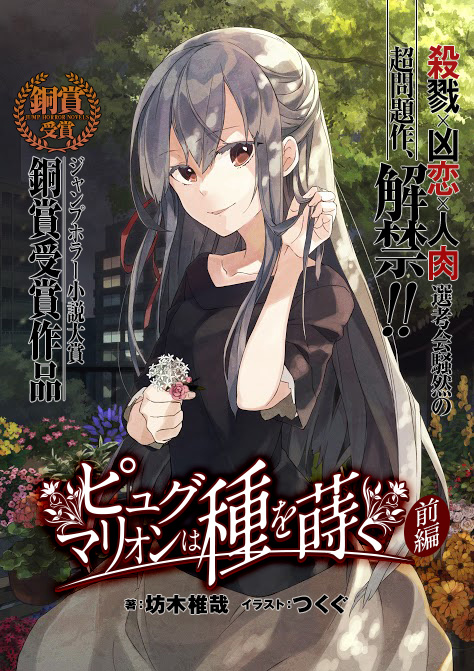 The Pygmalion Is Planting Seeds is a story following the life of a graduate student who failed all university entrance exams and is thus left looking for another chance the whole year. After a former classmate girl he likes went missing, he decided to spend his free time looking for her, without having the least idea about what was going to happen to him.

This is a story of blood and flowers, beauty and gore. Following the story of Mamesaki Kuuya as a protagonist and using a little spice of supernatural, it shows you how love could turn a person blind.

One entry per line
Pygmalion wa Tane wo Maku
ピュグマリオンは種を蒔く

These are recommendation lists which contains The Pygmalion Is Planting Seeds. You should give them a visit if you're looking for similar novels to read. Alternatively, you can also create your own list.
More Lists >>>

I don't know why, but I really like this story. Twisted love, insane desires, the dark side of human emotions is being laid bare here. The author did a good job in making something totally immoral sound slightly moral. In any case, this novel contains too much gore that I wont recommend those with weak hearts from reading this. ... more>>
Spoiler

The girl he cares about got killed and he succeeded in reviving her. But later, she tries to kill him and in the process of protecting himself, he ended up killing her. Then he revives her again but realizes that she has a screw loose so he killed her again. He repeated this process until the time that the girl became an empty shell. Of course everything contains gore

Clarification- 3 stars is the equivalent to a Like for me. So it means it wasn't bad, but it was quite serviceable :) I didn't think I would like the novel much (given JP LN tropes, etc etc) but I think I liked it because of the simplicity of the story and its execution... and the following lol: Length: Fast enough read. It read like a good (albeit messed up) short story.
Translation: My favourite part tbh! I've read/finished a fair amount of LN translations and I run out of steam... more>> when the translations aren't exceptional. The translations here were surprisingly good. Some might not like the added commentary, but I personally liked it.
Plot: It was pretty messed up but the gore comes with the type of story it is. Well-paced. Characters stayed in character, etc. I appreciated the ending. <<less