Novel Updates
RegisterLogin
Theme
Search
Your changes has been saved.
Advertisements
Since When Were You The Villain?

Home >
Novel >
Since When Were You The Villain? 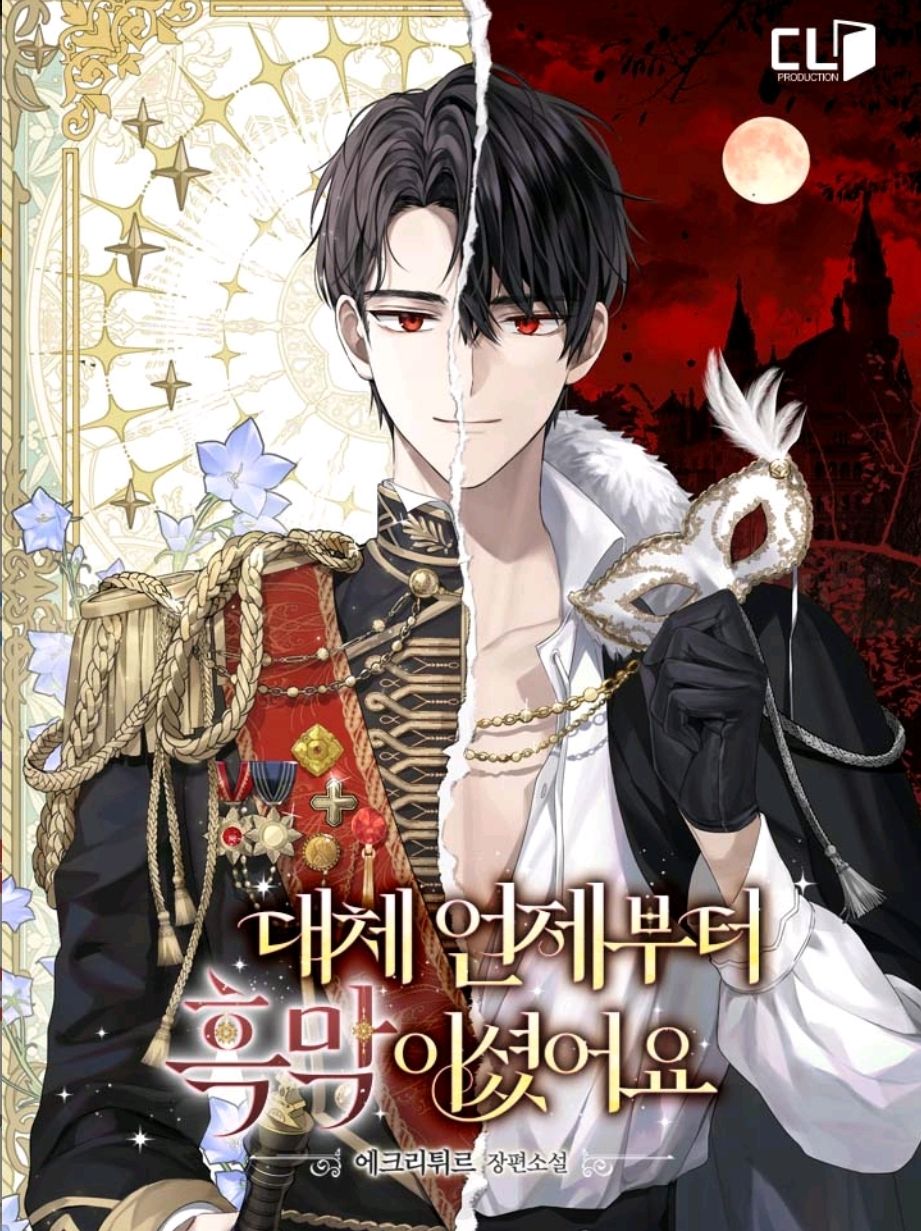 One entry per line
Ecriture
에크리튀르

Status in Country of Origin. One entry per line
178 Chapters (Complete)

She was possessed by a book without knowing what novel it was.
Then, one day, her fiance appeared.

‘Killian’ was a perfect Northern Duke with black hair, red eyes, and a handsome face.

It was a contract marriage.

So, Sophia believed without a doubt. She thought he would be the male protagonist.

The smell of blood came on the tip of her nose.
Killian’s eyes narrowed.
Then she realized the fact that he was a villain.

And a cold hand caressed her cheek.

“There won’t be a breakup, Sophie.”

Raising the corners of his lips slightly, he whispered softly.

‘I think this is also a cliché… I hate that cliché!’

How to Extend a Marriage Contract (2)
Life as a Tower Maid: Locked up with the Prince (1)
This BL Novel Is Ruined Now (1)

These are recommendation lists which contains Since When Were You The Villain?. You should give them a visit if you're looking for similar novels to read. Alternatively, you can also create your own list.
More Lists >>>

The author does a good job in making us belive that the ML is the usual ML, not a villain. Just like the MC, we are hardcore fans of Killian and he is * chef kiss* MC is AWESOME! She really is one of us. From her inability to know which story she fell in because she reads too much and all of them looks the same to using cliches and MC halo in her favour. I NEED MORE CHAPTERS! The translation is also good, thank you!
0 Likes · Like Permalink | Report

I like the MC and how she's basically like us seasoned readers. Using her knowledge of cliches and tropes of romantic fantasy she wades through her situation which is hilarious for me. This story is quite straightforward and aware of what it's direction is so I enjoyed it.
3 Likes · Like Permalink | Report

My review? - There's a certain charm to this story! A lot of times I can get bored reading stories (Maybe it's because I'm not in the mood to read or just something like that?) but I never got bored reading this. Every chapter was fun to read so I really enjoyed this! I got impatient and just read the whole thing on Kakaopage. I'm sad because the last chapter is chapter 178 I'm hoping the author makes side stories. Okay into the actual story (?) - Our MC is basically us lmao, , She reads literally every Rofan (Romance Fantasy) novel there is weather it's a hit or miss! (I feel like I'm getting called out here.. Ahem..!) Then she possesses the body of Sophia, a noble lady who's treated like a maid. - Then MC thinks she's the Main Character of the story. Why? because her fiance is a handsome Northern Duke. Plus, to top it all off, they were ina contract marriage. (Kind of like a cliche, huh?) Well anyways, it's not just because of that she thinks she's the Main Character of a Rofan novel she read in her previous life. -Since she doesn't remember which novel she went into, she just uses the clich s of the hundreds of Rofan novels she's read! (Would highly recommend reading this! It's a really good story!!) - MC - Is there any way to say how much I like her? I think I might've fallen in love with her.. Our MC is smart and has a really cool personality!! I'm not sure if there's any way to describe this.. Well anyways, I really like how the FL thinks! (I like everything about her - ML -
Spoiler

I thought he'd totally be cold hearted and would hide his feelings a lot (classic Duke of the north stuff?)

but he's not exactly like that. (?) I'm not sure if this is exactly considered a spoiler or not but I'll just put it as one anyway.

[collapse]
- I really love him too!! Idk why but I really think he's cute. - FL Brother - At first I didn't like him..
Spoiler

How could I like someone who put a sword to our FL's neck! I wanted to go into the story a shove it- nvm I'll just stop there

[collapse]
But, I think I started liking him later on when he
Spoiler

I think in chapter 13 he went to see why Sophia hadn't moved into the new room yet and then saw she was really sick. When he rushed with Sophia out of the attic because he was worried for her.. Or it might've been when he slapped her maid. Point is, I started liking him so no negative feeling towards him.

[collapse]
- Pink Muffin TL - The translation is really good! (Like every other PMT novel translation) - It's really good story! I highly recommend reading it!! - FL & ML interactions are cute (?) and it's very fun to watch them together. - Sadly for me, the author doesn't have any other works published on Kakaopage I hope they'll make more stories in the future. I'll be looking forward to their next work! -My rating might've been obvious but, it'll be 5.0 for me! I'm not sure what else to say so I'll add a spoiler~
Spoiler

In the last chapter Killian & Sophia get married~~!! I'm really happy for them~

[collapse]
End Of my Review~!
13 Likes · Like Permalink | Report

If I were to describe FL, I would call her a pro-gamer ahaha. She’s so funny and clearly what I would call “one of us” because she is a seasoned “rofan” (romance fantasy) reader. Essentially she is isekai’d into a rofan novel and has no clue which ones but relies on her knowledge of tropes to get through. The story is very self aware. I’ll write more as the story progresses but I like it a lot so far. Translation is fairly easy to understand so far. Small issues, but nothing... more>> that lessens enjoyment. <<less
7 Likes · Like Permalink | Report

Love this! FL is very entertaining. It has lots of cliches but very well put because the author recognizes these. I had fun reading this and it lifted my mood. Nothing much going on but the first interaction with ML exceed my expectations. Can't wait for more!
3 Likes · Like Permalink | Report

The chapter is still short, but I can say that this has its charm. I still cant really point out the characters personality, but I can say that its funny and sweet. Thats why I have great expectation for this. The translation is also great, thank you.
3 Likes · Like Permalink | Report
Advertisements
Leave a Review (Guidelines)
You must be logged in to rate and post a review. Register an account to get started.