Novel Updates
RegisterLogin
Theme
Search
Your changes has been saved.
Rebirth Of The General’s Granddaughter 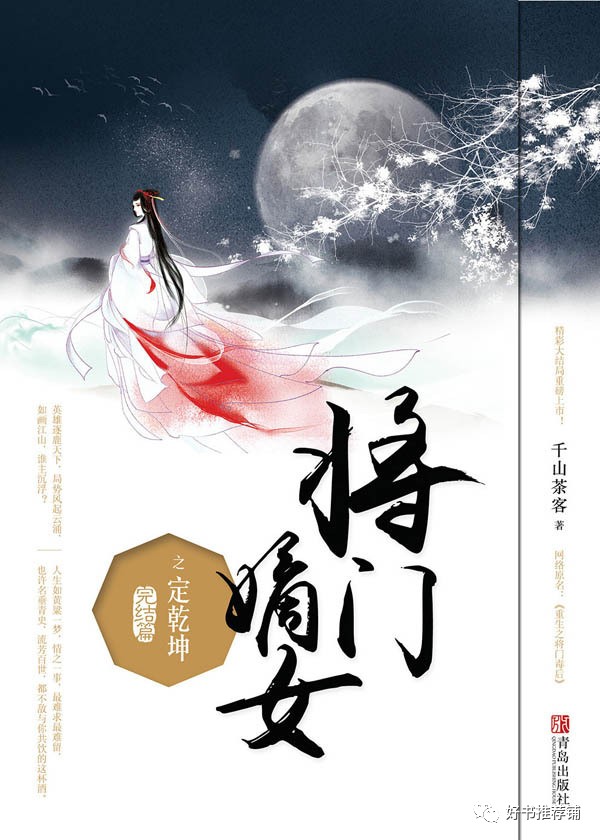 Status in Country of Origin. One entry per line
406 Chapters + 19 extra

With bloodshot eyes, Zhao Hong Xiang bit his tooth and said clearly, ”Don’t blame me, when you were alive, you were a part of the Zhao family, even when you die, you will remain a ghost of the Zhao family. I will not allow myself to be mocked by the world because of you. Instead of living so miserably, why not die early and reincarnate early? Xuan’er has said that your dowry consists of 60 thousand liang of silver, I can’t let you take it away, so… why don’t you… GO TO HELL!”

In the midst of a night thunderstorm, the kindhearted but cowardly daughter of the general of the Great Yan Empire, Mu Zi You, was strangled to death by her closest friend and husband using a rope. When she died, she had a stomach full of regrets and grievances.

Just when she thought she died wrongfully under the hands of her friend and husband, she opened her eyes once more only to realize that she had been given a second chance. She had been transported back by 4 years. Forcefully breaking through the seal her mother left on her soul, she was granted with supernatural power. “I swear that I will only allow myself let others down but not the other way around! From now, I want my revenge!”

Evil stepmother? It’s alright, I’ll destroy your reputation before sending you on your way to the *yellow spring . Hypocritical friend? I’ll ruthlessly tear off your facade and give you a taste of the pain I once felt. The princess conspiring against me? I’ll just throw her into the mass grave. Since none of you are willing to let me enjoy my life, I’ll drag all of you down with me!

Just when she intends to distance herself from hypocritical douche-bags, who knew that her devastatingly beautiful appearance would attract even more butterflies.

That guy whom abandoned her like a dirty shoe previously is now saying that he will marry no one but her.

Princes chasing after her, willing to use any methods and do anything just to get in her good graces, and a drop dead gorgeous hoodlum involving himself with her, who will she choose?

One entry per line
重生之将门嫡女

Chongfei Manual (2)
The Cry of the Phoenix Which Reached the Ninth Heaven (1)
Thousand Face Demonic Concubine (1)
Rebirth: Noble Woman, Poisonous Concubine (1)
The Rebirth of the Malicious Empress of Military Lineage (1)
Rebirth: The Journey of a Wife Spoiling Her Husband (1)

These are recommendation lists which contains Rebirth Of The General’s Granddaughter. You should give them a visit if you're looking for similar novels to read. Alternatively, you can also create your own list.
More Lists >>>

It is still very early, but so far while the story is predictable, it is still satisfying! Translator is doing a great job! Story is a bit slow but that is to be expected! She is fixing relationship with the good ones, taking countermeasures against the bad! The best part is that she is making effort to improve herself in places where she lacked. Loving it so far.
11 Likes · Like Permalink | Report

Another one of those boring transmigration reads. Sigh. the MC, along with the people that populate this world, is very stupid. there's a scene where the evil stepmom, who's been spreading her legs wide for her half-brother, is bitten by a cobra. she and the bro, who is also bitten, were banging inside this secret room. stepmom run outside screaming for help. she looked a mess and reeked of sex; then they found the half bro inside the room, also looking messy and reeking of sex. the funny thing is these... more>> witnesses did not put two and two together and just blindly accepted the explanation of the dad of the stepmom that the siblings were inside the room because they were chatting. are you kidding me?! they looked like they were banging and you refused to believe your eyes and just blindly accepted a lame explanation for what's going on? the author is maybe a democrat or something? then the stupid MC, who had many chances to kill the girl who banged and snatched her husband, all of a sudden bought her from her owner because she wants to scheme against her... dude, enough. have the girl gang-raped or her boobs cut off and let's move on. or here's a novel approach for revenge: have the girl yourself. use the cobra on her and move on. honestly. the MC has supernatural powers, which is actually setting off for another round of MC abuse. dude, you've supernatural powers in a world where incest is easily explained as chatting between a brother and a sister? but you see, you're the MC and people in this world hate. this power can't be explained as merely chatting. you will be exposed as either a charlatan or demon. but stupid MC doesn't seem to see the trap she's created for herself. after she bought the sl*t who diddled her husband, I gave up. i've had enough of this mediocrity. bye. <<less
9 Likes · Like Permalink | Report

Can this categorized as reserve harem ? The MC indeed liked by many, but married only 1 husband. Her black mandala spirit flowers could turn into human and their appearance indeed having similarities with the MC since the MC injected part of her spiritual power as their nutrients. But they have different personalities. They were part of the MC but not the MC at all, only they could share their minds with each other. And, those flowers in the end, each married 5 different males. All face slapping counterattack... more>> parts are quite satisfying. MC is caring, OP, the most beautiful in the whole kingdom, and clever. She died because she was too kind hearted in her previous life and reborn once more with the help of part spiritual power left behind by her goddess mother. ML's childhood was indeed pitiful. His father misunderstood his mother and doted the concubine instead. The emperor, his imperial uncle was jealous and suspicious of him. A taoist priest predicted that someone born in the year of dragon would become the king, and the emperor become scared. He killed all the baby boys born that year, except the ML. The ML was protected by Empress Dowager, his grandmother, and for 16 years of his life had experienced almost 40 assassination attempts but all failed. To avoid his imperial uncle's suspicion, he acted as a jerk and known as waste young master in capital who only spent his time in the brothel. Two individuals met, learnt to open their heart once more and fell in love. They joined their hands in marriage and find their happiness in each other's warmth as one family. Surrounded by people they loved. Respect each other. And love whole heartedly. You'll find parts of the story that maybe not really quite your taste, but I can guarantee you'll find this story sweet. <<less
7 Likes · Like Permalink | Report

Like many other cnovels with female MC, this one suffers from author's inability to remember how old the heroine is. In one chapter she's twelve, couple chapters later she's ten, next chapter she's putting on men's clothes and going to brothel...
6 Likes · Like Permalink | Report

Everything is feed to your mouth. The story can't even stimulate your imagination and throughout reading the translated chapters, it gives off a boring vibe. Characters are paper-cut dolls. I don't think they think thoroughly when making their decisions. Facts are served on a cold platter or most times, a firework that suddenly explode in your face.... more>> The novel's bland, not only in originality, but also in conversation and character growth. In my preference, it's not even passable as a time filler. 2 stars for the translation bc effort. 0 for the story bc not my type, boring, etc. Well, this review might not do justice to the prospects of the story as it's really too early to review so critically. But it's still the readers choice if they'll bet their time by clicking those links. <<less
4 Likes · Like Permalink | Report

As of c14. The plot is predictable, and the pacing is somewhat slow to those who are familiar with such time-travel revenge stories. There is nothing to make this story truly stand out as yet, except for the MC's very young age. The main flaw of the story (as of current translation) is that it is more "tell" than "show". Many paragraphs are about background and setting from the 3rd person narrative, and dialogue is actually few and far in between. Hopefully it will be better in the future, though what is... more>> available now is enough for readers wanting to reach into the screen to slap the antagonists. Chongfei Manual has a very similar premise (returned to a very young age) and tells its story in a more engaging manner, but I am willing to give this novel a chance once the translations are further along. <<less
2 Likes · Like Permalink | Report

As per usual trope so far, but wonder if the IQs and smartness of these reborn MCs enhance after rebirth!? Somehow, rewinding time back five years made MC much more smarter, and able to scheme/talk circles around people who were able to fool her just a while ago (in future?)... Not to mention being able to design clothes and jewelry... Other novels at least give a flimsy excuse for the MC's increased smartness like studying for this reason or that etc... Her family (except for the slag father and his wife)... more>> excessively dote on her to the point of ridiculousness... The adults are kind-of idiots, trusting what a ten (twelve?) year old says and behaving according to her opinions/wishes... really!? The 'revenge' so far is basically MC's one-man play without the baddies being able to scheme against her in *this* life. What's with this talking with snakes (ok, parseltongue), but flowers!!?? And plants and flowers being able to take human shape!? Are they plants or dyrads!!?? Spiritual energy/Sect thingies etc somehow add a bit of supernaturalness to it (beyond a rebirth thing), so not sure how to take that addition to the story... <<less
1 Likes · Like Permalink | Report

The chapters start to get short, when you see one that break into parts the is the chapter that is super short. The plot is okay, not thing interesting if you like some plot twist. All the scene is as expected, whatever the MC want the MC get even-though how much unreasonable it is. The chapter is super short now, even when you combine two part together is still short just not enough the complain. So if you want some light reading to practice you English, this is the go-to story.
1 Likes · Like Permalink | Report
Leave a Review (Guidelines)
You must be logged in to rate and post a review. Register an account to get started.

Summoned to a Shattered World