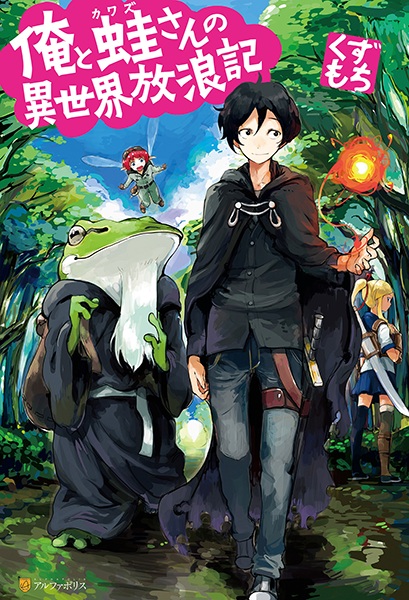 One entry per line
Kasa
笠

Status in Country of Origin. One entry per line
10 Volumes (Completed)

Tarou was just an ordinary university student until a strange old magician summoned him to another world. Upon learning that his newly acquired magical power is 8 million (8 million more powerful than an average magician), he uses his abnormally powerful magic to revive the old man that caused all this… in the form of a frog. Thus begin the strange adventures of a boy with ridiculous magical power and Kawazu, the former strongest magician, now revived as a frog.

Death March kara Hajimaru Isekai Kyusoukyoku (WN) (7)
Legend (2)
Expecting to Fall into Ruin, I Aim to Become a Blacksmith (1)
Hyaku Ma No Aruji (1)
Magi’s Grandson (1)
My House Is a Magic Power Spot ~Just by Living There I Become the Strongest in the World~ (1)

These are recommendation lists which contains Ore to Kawazu-san no Isekai Hourouki. You should give them a visit if you're looking for similar novels to read. Alternatively, you can also create your own list.
More Lists >>>

Oh my, oh my. I can't wait to see how this develops. I remember reading the few chapters of the manga adaptation and enjoying it, so I'm excited to see this being translated. The beginning is, at least, light-hearted and humorous. Hopefully it stays that way.
32 Likes · Like Permalink | Report

I had read the manga (or at least the start of it) quite a while ago, so I was interested in what the novel could be like. Let's just say that the short chapters and very low narration means that it's more or less the same as the manga, and with 18 chapters they still have not reached the place where they settle at. It's not too bad though, and the translation is correct, but the lack of content per chapter really makes me want to wait for a half a year... more>> before reading this, so that I can read up to where I left the manga a long time ago.
Spoiler

[collapse]
If you want to read the story of a mage with way too much power (and no real control over it), in a light hearted setting (at least up to what I know), it is a decent story. If like me you like to be able to read a decent amount when you pick up a story, maybe wait a bit though. <<less
14 Likes · Like Permalink | Report

First of all, this novel is not about struggling against enemy, but about defying common sense. The premise is good, the comical jokes also fine. The world building is balanced, it grows steadily as the story goes. Although the story filled with OP moment, you can't predict what is actually gonna happen. But, somehow this novel just seem cursed, as every translator that doing it somehow ends up missing or drop dead.
12 Likes · Like Permalink | Report

OP Protagonist, Slice of Life done correctly. Instead of a self insert, ego stroking, face slapping, and young master spanking protagonist, this is a story with funny character interactions.
10 Likes · Like Permalink | Report

A nice story regarding the adventure of the protagonist to the fantasy world with an old froggy companion. He is somehow similar to Makoto from Tsuki ga Michibiku Isekai Douchuu. The protagonist to that novel is also OP defying common sense. Thanking the heavens as someone pick up the translations. Hope it will continues its journey.
6 Likes · Like Permalink | Report

I dropped this after chapter 25, the review above that said it was similar to Tsuki ga Michibiku Isekai Douchuu made me read it. But jesus christ this MC makes Makoto look like a freaking genius! He's supposed to be a college student, he'd have to have at least some intelligence with regards to the world and people, he'd have to at least studied some history, and yet he always acts like a 14 year old. God it's infuriating, and what's worse than all of that is that this novel tries... more>> too hard to be a comedy. Something doesn't need to have comedic scenarios in every line for it to be funny. Hell, I've laughed/smiled way more reading Arifureta than this, actually....I don't think this made me laugh even once. This novels tries too hard to be funny, and what puts the icing on the cake is that the MC is the butt end of most scenarios. We don't need every other line to be a tsukomi for the novel to be funny, it gets tedious/boring after a while. Can you imagine an MC who is insanely OP being the butt end of jokes, apologizing to those he doesn't need to, not getting respected for the power he holds, having the attitude and intelligence of a 14 year old while having the imagination of a 45 year old most of the time. I couldn't even enjoy the "slice of life" in this novel, read at your own risk. (translation is good though) <<less
3 Likes · Like Permalink | Report

Incredibly dumb MC given super op powers. Brute force magic all the way! Could be worse, could definitely be better. I give it a rating of "its alright".
2 Likes · Like Permalink | Report

A rather silly comedy story which mashes many weird plot developments into a story that barely remains coherent but stays interesting and fun to read nonetheless. Definitely not a literature masterpiece, but still enjoying to read. The characters aren't very well fleshed out, most of them being caricatures with very strong personalities and clearly defining characteristics. However, there is very little embarrassment and the comedy is in most parts well executed. If I have to name one thing where this story shines, it's in the fact that most of the people... more>> in the story sense the OP strength of the MC and avoid hostilities. Encounters with new parties often end up with someone else than the MC fighting, but the MC himself just focuses on driving the plot forward. In other words, this story is a traditional OP isekai story in a slightly different sense, as the MC doesn't actually use his powers in combat but rather to do other kinds of plot stuff. <<less
2 Likes · Like Permalink | Report

An OP protagonist slice of life isekai done right, in my opinion. The protagonist isn't some ridiculous Gary Stu that can do no wrong in the eyes of the people around him and is instead actually kind of silly, with his companions often poking fun at him for the things he does and the mistakes he makes (primarily, the first main companion he gets). It's about the absurd things he does - whether for fun or practical use - and the reactions his existence causes in the people around him. Side note:... more>> I noticed it says harem in the tags (that might have changed by the time you read this), but I haven't seen any sign of actual romantic feelings from any of the characters in the series, manga or light novel. Not sure why it's there, so those who get turned off - or on - by that can ignore it. <<less
1 Likes · Like Permalink | Report

THIS STORY!? f*ck YEAH! FINALLY AN ENG VERSION Here's what to expect without spoilers: MC and Kawazu is the main two, not some kinda s*upid bullsh*t romance isekai... Kawazu's awesome as shit, both characters - no, every introduced character retain ultimate relevancy and yeah, the story is completely about his journey with a frog sage.... more>> The guys so strong he doesnt really fight himself, but he makes it possible for other (MC candidates) to use powers that pretty much reference other series.. like unlimited blade works lol. And its a cute story not focused on romance, kinda kiddish, peaceful, it's great for an otherworld slice of life with proper fantasy instead of in some village! <<less
1 Likes · Like Permalink | Report

*i just read the manga Lack of common sense, that's all ... more>>
Spoiler

He have magic creation, so he can do ANYTHING, he create barier that can deny all damage/sealing, but he also can get beaten by his companion (funny? Nope). Always get tired if workout, but why he not build his body with magic instead of using magic regeneration all the time? (BIG BRAIN TIME).

Oh yeah MC can build a mere frog to demi-human frog with his magic creation, so he can build his own body

All character is from 1D (dimensional) not attractive at all

Fairy want to be his companion just because "maybe it's fun". It's like "that guy is handsome, I should follow him" lol

He want to give people present for communication (computer), but they demand MC for something lol, like choosing beggar

CB: "if you want me to take that candy, you must buy me Ferrari"

The upper High Elf want to seal him forever (you can say they want to kill him). But MC can't get sealed. So after that he don't do anything to them (yes, people just want to kill you, so whatever) lmao this emotionless MC

In this story, Elf is very very very not welcome to other race (racist Lv MAX)

I know that's the Elf setting, but on this story it's like different from other

25 manga chapter and im not laughing at all

Tales of Four-Eyes and Fatty in...