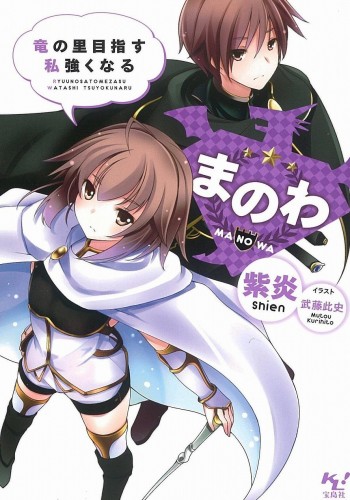 One entry per line
Shien
紫炎

When she came to, she was in another world. A world just like the stage of a popular game, the girl “Kazane” collects and fights with monster skills in a Hyper Learning Story.

Before she realizes it, she’s saved a town, exposed a scandal, met a ghost, saved a princess, went into a hot spring, and spent her time going to the hot spring daily with her party. In the fight against the approaching devil, Kazane confronts her own dark side during her destined reunion with the Big Cat. Did I mention she also spends time at a hot spring?

Kuma Kuma Kuma Bear (2)
Evil God Average (1)
I Said Make My Abilities Average! (1)
My Childhood Friend the Demon Knight Hates Me (1)
A Demon Lord’s Tale: Dungeons, Monster Girls, and Heartwarming Bliss (1)
Is the Strongest in Another World a Hero? A Demon Lord? No! it’s a Fairy ~desu! (1)

These are recommendation lists which contains Manowa. You should give them a visit if you're looking for similar novels to read. Alternatively, you can also create your own list.
More Lists >>>

Well, as the translator I feel somewhat obligated to give this 5 stars, but it is definitely one of my favorite web novels and might just be my favorite. I'm not giving it 5 stars because it's perfect, and there are things I could complain about if I didn't want to be super aware about not spoiling anything, but even my most major complaints don't ruin the story, and I enjoyed reading it the whole way through. Even those complaints are mostly around the late middle chapters, so I can... more>> especially recommend reading the chapters that will be coming out for a while. <<less
17 Likes · Like Permalink | Report

Okay, I was thinking about dropping this for a while, but that thing just sealed the deal. I hoped for some character development, but MC is just soulless puppet without any resemblance of emotions. I hoped for some shoujo-ai (which was originally in genre listing), but it was a bait, so I removed it. MC is so OP, that this story should be an "One-punch Man" spinoff. The golem power is a joke. The summoning of previous characters clearly breaks rules of the world. It has a character sheet, which is pretty much... more>> a telltale sing of crappy isekai. Overall it's just another trope-filled isekai, which should be avoided, unless you have nothing else to do. <<less
14 Likes · Like Permalink | Report

To be completely honest, I would rate this novel about 3 to 3.5 in term of overall quality but because I personally enjoyed it I bump it to 4. The premise is rather common, someone from modern world transmigrated to a game world that for unknown reason become reality, she uses her extensive knowledge as she is an expert in the game to become stronger fast. Cliche but good stuff. I find the dialogue to be rather childish, awkward and didn't flow well, though not to the point of being irritating like... more>> most Chinese novels did, it just doesn't feel to be well written at all which is a minus. The characters are fine, they are fairly interesting but they lack depth and usually feels a bit unnatural and not very realistic in their behavior and or reaction, i'd say it is on the standard shounen level. The story is actually fairly interesting so there's that. Despite all the flaw, I enjoy reading this novel and would recommend to anyone that needs some casual read to waste time. <<less
10 Likes · Like Permalink | Report

The setting is a pretty basic isekai, the wordbuilding and the characters are unique, but the writing itself isn't really amazing and is better if read in a lighthearted fashion. That said, it stands out because it doesn't fall in to the OP MC trope and the story manages to remain engaging. The protagonist (s) are very strong, but not so much that they never face danger or failure. The only thing worth criticizing imo is the way the characters act and react, don't expect realistic personalities/ways of thinking; it's not to... more>> the point of being so bad it's annoying to read though, as long as you don't take it too seriously. The characters act as if this was a humorous/gag novel, but it's not. The translation is better now that it was picked up by a new translator. <<less
8 Likes · Like Permalink | Report

3-4 stars*. Just a lighthearted isekai adventuring while looking for a way home along with a little 'dark mystery' as far as world background goes. Feels boring at the start but becomes enjoyable (to me) after 5th party member (which I kind of hate) for some reason (Yes. Story feels better to me after introducing a character I don't like. I don't understand it either). Feels very cliched and easygoing but look at first TL date. 2015. This is probably one of the oldest isekai stuff around and should be considered... more>> more 'original' than the other isekai you are reading today and should be judged more "leniently" when coming across overused boring stuff like character sheets or w/e. Of course I am also not putting OP MC/MC cannot lose problems as a defect MC dying = story ends. Another thing I want to point out (may or may not be a good thing) is that this story tends to slowly build up on their jokes/character development and could be missed if one does not pay attention. One of them being the MC's taste in people/her loneliness which feels consistent with her actions in later chapters. One joke in particular took hundreds of chapters to "slowly build up" before exploding in someone's face at around chapter 147 Note that I will only give 1* to the tr*shiest blasphemies and 5* to flawless masterpieces. As a result, I kind of have to give this a 4* for a general rating or 3* if you think "unoriginal cliched storyline is unoriginal even if it came out first." <<less
6 Likes · Like Permalink | Report

Dont go into this book with a super serious mindset. This is kinda laid back, a bit slipshod and has comedy and amusement to boot. Its also that kinda book you either like or dislike, not much middle ground to be had. Its got a similar vibe to Kuma Kuma Kuma Bear but also different in its own way so it doesnt feel super samey (for the record, im not sure which one came first, also dont really care, both books have enough difference to not feel like im reading... more>> the same thing). I gave it a 4, just dont think it deserves a 5 but its not like I can put a finger as to why. I guess that biggest 'reason'? Or 'logic'? Would be while reading I would wander off to read other things. It did not keep me "turning the page" as it were. Was I bored? Not really but it wasnt "serious" enough or "deep" enough to make me want to binge read with no interruptions (outside of mandatory ones). Are there flaws? Issues? Things to point at and go "BAD!" yeah but im lazy. Point me to a book with no flaws, issues or "BAD!" and ill suggest you go find a shrink and get some pills to fix that overly biased view. <<less
5 Likes · Like Permalink | Report

Its a novel where you the main cast will always come out alright even if they lose, that may sound bad to some but I sometimes like knowing no matter how bad it gets it will never get too bad, if I wanted the characters to go through hard times and possibly die there are other novels. It has a bunch of funny moments and cute moments and I found it amusing was it super funny? No. But it gave me a good laugh every now and than. It also... more>> doesn't seem to use the same joke it used 100 chapters ago out of nowhere either, like when they bring up our Mc's pitifully small chest again it was because someone who looked like her had a plentiful chest and they where wondering how her chest can just deflate. However it is not like the Main cast saves everyone and no one gets hurt and everyone is happy, some people die, get kidnapped, or go through painful thing and sometimes a character gets hurt just to get a power up. I like this, but the only things that bother me are big mistakes so maybe I missed the small things it did wrong, but read and judge it for yourself and if you like it great if you don't that is fine I'm not writing to make you believe this is the best thing ever anyway. <<less
5 Likes · Like Permalink | Report

It's been a fun read so far. The MC is op but she has an interesting personality. At first I felt that the characters weren't evolving a lot, but then I realized that I in the story it hasn't been a long time, but there's been a lot of stuff packed in giving the sense that more time had passed, it hits home when them meet characters that they've only just seen a little while ago. Any way, is a good read and I'll continue following it.
2 Likes · Like Permalink | Report

I've been hesitating about starting this series for months as the description makes it sound a bit like a cheesy comedy series, but always ended up coming back to this page because I have always like the Blue Mages in FinalFantasy. Finally decided to have a look and was not disappointed, Blue Mages Rock.
2 Likes · Like Permalink | Report

This novel starts off as a generic isekai and then slowly turns itself into a good time killer. That is, until it tried to throw a gigantic wrench into things in the chapters 70~90, or for clarity's sake the Sieg arc ... more>>
Spoiler

See, the author is particularly horrible at handling romance, a good romance plot would allow decent breathing room between characters and enough screen time for growth of said dynamic. Here comes in the 15 year old MC- Kazane and the 11 year old son of Yuuko (a friend of MC and co from Earth) - Sieg. Personally speaking, the age of guy is already a big no at the time of writing this review, but let's take a step back and think why.

Overall, the romance forced plot execution was terrible enough to make me drop this. <<less
1 Likes · Like Permalink | Report

This is a really interesting novel, reminds me of kuma bear with how it's written and narrated. Characters are fun and interesting although there are a lot of clichés in the novel it doesn't really drop its quality. At the beginning it might seem dull but later on it gets more interesting. 4/5 because well I've seen the isekai trend lots of times (not saying it's bad or anything). You should give this novel a try, if you're looking for something to satisfy your boredom or looking for an enjoyable isekai... more>> novel. (Desc of the novel kind of has minor spoilers so I don't recommend digging too much into what's said.) <<less
1 Likes · Like Permalink | Report
Advertisements
Leave a Review (Guidelines)
You must be logged in to rate and post a review. Register an account to get started.