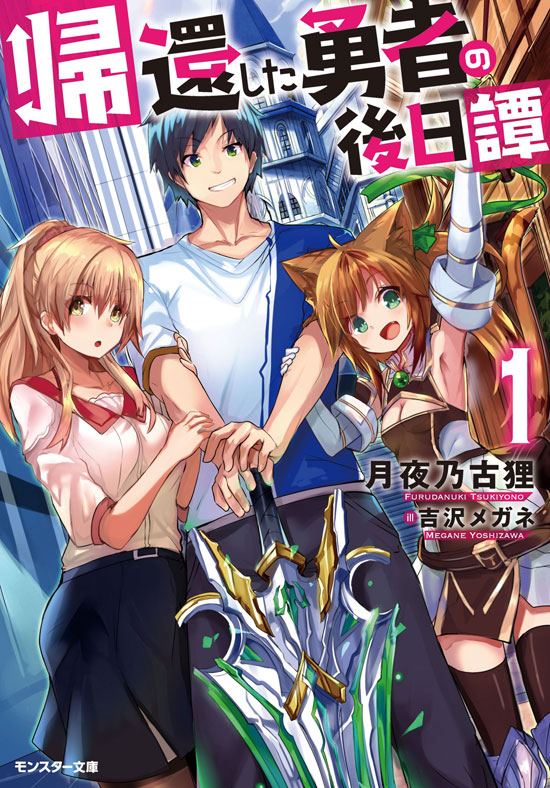 One entry per line
Yoshizawa Megane

In a fraction of a second, an university student, Kashiwagi Yuuya was summoned to another world and came back. Time didn’t pass in Japan, but Yuuya has completed the quest as a hero in another world and successfully returned. But to his surprise, he still retains his powers as a hero. Thus started the unordinary life of a hero in present day.

One entry per line
The Fate of the Returned Hero
帰還した勇者の後日譚

My Entire Class Was Summoned to Another World except for Me (1)
Isekai Kaeri no Ossan wa, Fusei Sukiru de Fathercon Musume-tachi o Tororori ni (1)

These are recommendation lists which contains Kikanshita Yuusha no Gojitsudan. You should give them a visit if you're looking for similar novels to read. Alternatively, you can also create your own list.
N/A

The plot seems interesting, it reminds me of the other novel "everyone in class got summoned to a different world except me" But the grammar is the translations is so awful it literally hurts my brain trying to piece it together. Couldn't even finish the prologue. Will come back to it if the grammar/translation becomes better as I enjoy these types of stories.
6 Likes · Like Permalink | Report

I was apprehensive at first delving into this novel however once you get past the first few chapters it really takes off and becomes quite the gem, the comedy works rather well. (Intimidating a few angry customers into peeing themselves with intimidation, a curse to make a guy get diarrhoea when excited etc.) One incident I found amusing was a random news broadcast: (MTL so be warned) ... more>>
Spoiler

At dawn last night, a 45-year-old plumber, Mario Mao, sued the current criminal for repeated dangerous driving on the Metropolitan Expressway. According to the police, Mario suspected that the speed of the turtle shell was thrown to another car, repeated width adjustment, meandering, etc. In addition to a significant speed over several hours from midnight on the same day, and did not follow the stop instruction by the police A lot of drugs have been detected in the mushrooms found in the suspect's car and suspected that the brother Luigi ○ Rio who escaped from the scene I am pursuing my suspicion of being involved in the incident and pursuing the guilt of Mao's suspect.

[collapse]
It never seems to go over the top and the comedy moments while cliche in places are employed well. My only concerns are: That despite being in a world without magic, people still have levels and one girl for instance can sense/see magic power which just feels like plot convenience, either everyone should be able to see it or no one should unless they are monks or something. Dense MC to the point of disbelief, this guy is around mid twenties at this point, was offered various marriage partners including the princess whom is also a saint and even had a maid offer to give him a no strings quickie before he went back to his world and he treats it all like it's a joke, (The princess and various concubines were offered by the king in front of his subjects too.) he also has a girl he's known since middle school who's had a VERY obvious crush on him to the point of asking him out to eat food etc, and he's completely oblivious to this when everyone else is aware, she even refers to his sister as a total brocon whom competes with her. (This point makes me drop it from five stars as the unrealistic events from this are just too strong from this one point alone and will seemingly continue.) The novel plays out as if the girls are the MC's of this story with good personalities and entertaining hi-jinx whilst the MC is the tool for plot progression. (Which is normally the other way around in novels.) <<less
1 Likes · Like Permalink | Report

This novel is really cool and I totally love it (Ok, I love low fantasy novels), I'm currently reading the RAWs (chapter 115) Some people will compare it with "everyone in class got summoned to a different world except me" but there are just a few elements close to that novel. This one is about 10000 times better. The characters are likable, there are a lot of interesting arcs, a nice romantic subplot, the MC is not an idiot and there also some nice sentai!!!!! (with S :D) ... unfortunately... more>> the translators left this one on the 3rd chapter. <<less
1 Likes · Like Permalink | Report

For now I've only read prologue and first two chapters but story looks really good. Well, even if I say 'story' these first chaps give us pretty decent MC. Why is he good? Because: For example, he do regret a bit that he has no girlfriend but he doesn't rush for relationship. When he find himself standing on chair after being repatriated he doesn't shoot something like 'I'M HOME!!!' but quietly comes down while feeling a bit embarassed. And then he thought that he forgot most of his study material. And that's perfectly logical but always left forgotten. And to conclude, this novel presents the most natural way for MC to realise that he have power (just used light magic out of habbit) P.S. English isn't my native so I'm sorry for any errors Edit: Read up to 60th episode. I was a bit wrong and MC ultra-dense but luckily his girl (though most likely it will not be girl but girls) is bold enough to make up for it. Next, it seems, excluding MC's mother, Queen and girls who already have boyfriends, almost all other are in love with MC. Well, since they don't seem to be empty templates it's still good enough. For now the story is easy-going and there aren't any worldwide conspiracies or world threats so it's easy to read. Recommend this novel as one of the best light read I found to date. (For me it actually 4.6-4.7 so I leave it as 5)
0 Likes · Like Permalink | Report
Leave a Review (Guidelines)
You must be logged in to rate and post a review. Register an account to get started.

A Traveler's Legend: Leisurely Living My...

Of Heroes and Villians