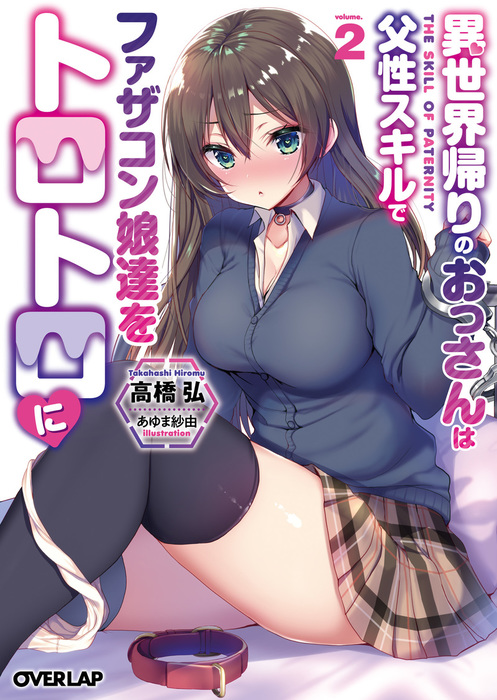 Status in Country of Origin. One entry per line
290 Chapters (Ongoing/Hiatus)
3 LN Volumes

He was summoned to another world in the spring at the age of fifteen years old, and when he successfully defeated The Demon King, he was already thirty-two years old. He had finished his role in another world and returned to Japan, but the reality that had been waiting for him was, “Middle school graduate with seventeen years of blank period” label. He couldn’t find a decent job and had no choice but to spend his days working part-time.

Before such a Nakamoto, a beautiful girl who self-proclaimed had come to return the favor, appeared. “I’m the reward for Hero who had defeated Demon King”, said Angelica, a girl who came from another world that persistently tempted Nakamoto to make her his wife. Together with a high school girl who looks like Elsa, his beloved girl that he lost in another world, Nakamoto with his cheat skills got caught in a harem life.

Kikanshita Yuusha no Gojitsudan (1)
I Came Back but the World is Still a Fantasy!? (1)
Toaru Majutsu no Index (1)
Risou no Musume Nara Sekai Saikyou Demo Kawaigatte Kuremasuka? (1)

These are recommendation lists which contains Isekai Kaeri no Ossan wa, Fusei Sukiru de Fathercon Musume-tachi o Tororori ni. You should give them a visit if you're looking for similar novels to read. Alternatively, you can also create your own list.
More Lists >>>

I am not good write review but I. Want to samething (x.x) What well happen to the hero when he go back home? ... more>>
Spoiler

he lost 17 years of his life and his love life to save the other world and what he get? Just thanks for save us now go back to your world without any reward!!! Oh and we going to change the people memory to think you life a otaku life in your house for 17 years like a loser.. wtf

[collapse]
Is really sad end for hero but the story is good and down to earth so get ready for lot of feel.... for first 4 chapters get ready for roller coaster rides xD <<less
13 Likes · Like Permalink | Report

A pathetic and depressed protagonist doesn't work well with harem slice of life genre since I think we won't see any character development later. All I can see is a wish fulfillment story of being surrounded by beautiful "daughters"..
10 Likes · Like Permalink | Report

It started off pretty funny but the fact that Teenage girls get sexually aroused over a middle age man is disturbing. They have a huge Father Complex mixed with a different kind of love. Though the father con genre is funny, it's too weird like this. Harem aside, It would had been really fascinating story if he was younger. I see a lot of good potential in this that it hurts giving it a negative review. Some ideas are really good. But in the end it seems the Kingdom f*cked him... more>> over. Idk. Something tells me there's a secret motive or something for sending Angelica. (But clearly don't think Author smart enough to add plot. Mostly a wish-fulfillment story) I at the most want to read the chapter where Reincarnated Elsa/Rio meets Angelica. And how his parents react to this. <<less
10 Likes · Like Permalink | Report

Tbh with you, I quite like the story. It has slower plot than some other novel. It also has the must-have background story, even though it's kinda hanging. In short, good novel.
6 Likes · Like Permalink | Report

This novel has two extremes, one being the MC has been treated like a doormat and tool after being summoned in year 2000, as he was repatriated in year 2017 he felt foreign and broken even in his old world and constantly acts like a broken mess who just takes getting abused by everyone. (Even the memories of people on earth were manipulated into thinking he just spent 17 years at home in his room refusing to find a job.) The other extreme is the comedy aspect, if this was... more>> a more fluffy and light novel without the severe trauma and dark aspects associated it would work very well but due to the aforementioned points it leaves it leaving somewhat incongruous as author adds messed up humour elements to things like this:
Spoiler

HP: 50
MP: 0
Attack: 40
Defense: 40
Agility: 40
Magic Attack: 0
Magic Defense: 60
Skill: Fathercon (Enthusiast)
Notes:
A Bibliophilic girl. She hardly has any fighting power, rendering her harmless.
However, she is under heavy mental breakdown after having an unrequited love for her biological father.
Knowing that it is a love that cannot be acknowledged, she did not disclose the fact to anyone.
Currently, due to her meeting with Nakamoto Keisuke who is the spiting image her father in his younger ages, he becomes her target for her unrequited love.
Her recent favorite delusion is to wash her body with Keisuke's rough stubble on his chin.
Someday, she would like to drug Keisuke until he drops and play with him as she pleases.


The content of yesterday's indecent imaginations where she violated Keisuke. Is as follows;

"Aha~ Daddy Keisuke is a bad person who gets aroused by his daughter.
Even though you know this is wrong, you still see me as a woman?
That's alright, do you want to just lay your hands on this underage girl and lose your job?
Don't worry, even if daddy Keisuke got into a newspaper column, I'm sure you'll still look cool.
Then I'll cut that part and preserve it, okay?
Then I'll paste my picture next to it, and it'll be a father and daughter's two shot full of love.
Come on, come on! Let's make you some court pictures by having illegal sex! I'll then collect your pictures from the court and make a wallpaper out of it!
That means I can still feel daddy in the house even though he's in prison.
After you're released, let's register our family on the spot, okay?
If daddy got a criminal record, you won't be able to look for jobs, so other girls won't even get close to you so I'll be at ease!
So hurry up and have s*x with me and get arrested! Daddy, daddy, daddy, my daddy Keisuke!"

[collapse]
(Appraisal in this novel adds a column after stats for what's on their mind and/or nature like shown in spoiler.) I advise reading the spoiler so you know what your getting into as it can indicate weather this novel is too much for you or not before getting invested. (It is purely an appraisal result of a random bookstore clerk so nothing is really spoiled but as it's an excerpt from a chapter I attached tag just in case.) <<less
4 Likes · Like Permalink | Report

This story is about your typical dumbass Isekai hero when he was summoned he was like”I’ll save the world” and this idiot sacrificed 17 years of his life to fight the demons who may or may not have been evil and be the humans war substitute. He lost his lover and is too overpowered and has no degree or work experience so this guy has entered a extreme state of depression which I personally believe he deserves for being so naive s*upid and selfless. Overall the novel is ok the... more>> heroines are likable but the MC is meh the comedy is good and the story is nicely paced my only complaint is about the protagonist. <<less
3 Likes · Like Permalink | Report

I started this thinking that the described backstory could give this the foundation to go somewhere interesting, and so far?... The GOOD: I'll come back to this... The BAD: The Different: All told, this offers nothing worth bothering with (so far). The forced 'yakuza' arc suggests to me that the author really did most of what he wanted already, so I honestly don't expect much more.
3 Likes · Like Permalink | Report

I think it's an interesting story about an ex-hero who returned to their original world after saving a fantasy one and his reward was a young bride. I thought it would be a story about his modern "normal" everyday life with his increasing fathercon harem, but there are supernatural events that occur. The pacing of the story is not fast. There's a mix of drama and comedy in the story. I especially like how the remark section of the statuses is used for comedic effect.
Spoiler

Parts about his adventures in the previous world and Elsa will slowly get revealed later.
There's no dense MC here at least when it comes to the harem's love and lust for him since the system lets him know.

【Ayako Otsuki's sexual excitement has reached 70%】 (Third girl added to the harem is a [yandere (?) or something like that] book girl type)

It is a numerical value that can be sexually agreed. Do you want to move to execution? 】 (͡° ͜ʖ ͡°)

Of course, he'll try his best to reject his harem's advances, since he's not a lolicon.
[collapse]

Overall, it's a nice story.
2 Likes · Like Permalink | Report

Meh, middle age guy wish fulfillment, probably not written by a middle-aged guy, or perhaps just some old fart's first work. Where the story is lacking is in the emotional development of the MC. The guy whiplashes through five or six different paradigms of how he is going to treat this growing crowd of teenage girls in just as many paragraphs. All the ways he feels are perfectly valid, but middle age folks don't whiplash emotions that fast and the depression melodrama feels a little shallow (depressed, easily healed, depressed,... more>> healed etc with no anger, passive aggression, despondency, etc). Some really nice things: the ero temptation scenes and translation quality. The hot scenes are very hot, I only wish there was more of them, and like most stories here, it's doubtful there will be a payoff (even though the girls are of age in Japan, but whatever).
For now, I'm hoping for some more plot because the slice of life aspects are a little weak compared to the hero flashbacks and the gangster whooping. 4 Star rating is for the translations, a brave author taking risks, and middle age unity against shonen tr*shing seinen (read the tags, guys). <<less

Story is kinda return of hero back to earth. The MC is naive and has trauma that affect the way of his thinking badly. And what worse is the hero's back in this miserable condition. Then at likely chapter 10+ the MC goes to fathercon route, officially become beta MC altho he is *ossan*. In the newest chapter, he got another woman that suddenly has interest in him with no much reason as expected of harem JP novel. And yeah, he is still OP. As its too early to review character dev,... more>> and world building is well known for us, I'm gonna edit this later. For now I'm stick on 4/5 since its seems going to generic direction but I hope its not gonna be the bad one. <<less
1 Likes · Like Permalink | Report

An exhero just wants a good job becuase the years he spent saving a magic world got concealed as him being a NEET yet he just gets a group of girls younger than his inerests with one thing on their mind one after another.
0 Likes · Like Permalink | Report
Leave a Review (Guidelines)
You must be logged in to rate and post a review. Register an account to get started.

HP: A Thief's Downfall and Rise