Novel Updates
RegisterLogin
Theme
Search
Your changes has been saved.
Advertisements
Hundreds Years After I Was Called [Just Corpse], I’ve Become Strongest Undead When I Woke Up

Home >
Novel >
Hundreds Years After I Was Called [Just Corpse], I’ve Become Strongest Undead When I Woke Up 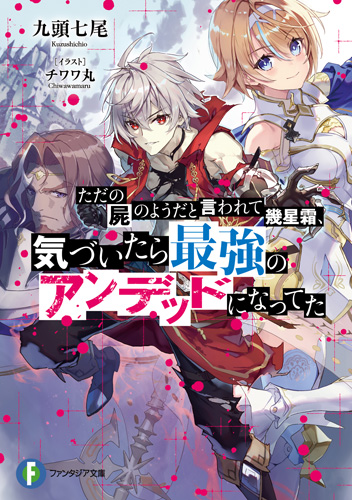 Zion, a solo adventurer, recklessly entered a dungeon beyond his ability.

Alas, that was the last thing he did. Wandering inside a dungeon for hundreds of years, as an undead, he kept advancing into the dungeon. Slaying monster left and right until his undead body underwent ‘evolution’ many times over――

―― By the time he regained his ego, he had already become the strongest undead: 【No Life King】.

The humankind, who was made aware of the appearance of a new world-class disaster monster, felt dread as they fell into the abyss of despair. 「The world is… done for」… Or so they think.

This was the tale of the humans who trembled in fear [out of their own convenience] and him, an undead, who actually had no intention to destroy the world.

One entry per line
After Spending Hundreds of Years as a Common Undead, I’ve Become The Strongest Undead When I Woke up
Suicidal Undead
Tada no Shikabane no You da to Iwarete Ikuseisou, Kizuitara Saikyou no Undead ni Natteta
ただの屍のようだと言われて幾星霜、気づいたら最強のアンデッドになってた

These are recommendation lists which contains Hundreds Years After I Was Called [Just Corpse], I’ve Become Strongest Undead When I Woke Up. You should give them a visit if you're looking for similar novels to read. Alternatively, you can also create your own list.
More Lists >>>

"This was the tale of the humans who trembled in fear [out of their own convenience] and him, an undead, who actually had no intention to destroy the world." That's all you need from the description, and the story sticks well to that and is good enough except for one minor (major to me) issue. ... more>>
Spoiler

Somehow he was an adventurer before dying despite not being able to communicate well with people, especially women. Okay, but he spends the entire first arc looking for someone who's willing to talk to him, and when he finally finds one, he sprints away at full speed. Because she's naked.

[collapse]
If you find that funny, you'll probably rate it at least a 4, if you don't mind it, probably around a 3? But the first arc ending with that was enough for me to instantly drop it. <<less
8 Likes · Like Permalink | Report

I couldn't withstand so much pov changes on this novel. 22 chapter and more than half the chapters were just retelling of same transpired occurrence. Its so blatant that even a small conversation exchange has pov change and don't even mention a brawl where even the bystander gets pov not to forget the enemy after that. So frustrating to read this novel where multiple pov tells a same thing across multiple chapters.
5 Likes · Like Permalink | Report

Pretty disappointing.. This is like a completely reversed concept of HP1 kara Hajimeru Isekai Musou in it's early chapters which btw I also dropped early.. Instead of MC just running away because afraid to die, MC here is looking for a way to die with both being invincible & low IQ and EQ.. MC here is pretty dense in a bad way, this is just bad in my personal opinion coupled with his supposedly shy personality is a recipe for disaster.. Though I don't know if this is like HP1 kara most likely... more>> he will always be rejected by everyone at every place he goes to except for maybe those he saved directly, then repeat that while growing his harem.. Now that reminds me of That Person later on novel, well at least the comedy on that novel is ok, while the comedy here is really an undertone and not enough for a comedy tag, I didn't even find anything funny in the entire 11 chapters I've read.. <<less
2 Likes · Like Permalink | Report

Aside from the running away from women part which I really despise, I’d say this is an entertaining read... atleast for me. ... more>>
Spoiler

A few people already realize he’s not an enemy like the Thunder Dragon Emperor he saved from the dragon attack, the girl who’s following him which is also helping to purify him, some villagers and kids he saved from monster attacks, and a few others. Unfortunately his reputation to the public is still bad because of a certain psycho who told them the “No Life King” has returned and he will create an empire with undead and rule the world or something.

He has the ability to resurrect others and so far he has 2 powerful dragons (busty and loli (?) with a 3rd otw, and an Empress.

Pretty interesting so far! The MC dies and becomes an undead, and due to some circumstances involving a fight between dragons he reawakens with absurd strength. Unfortunately, he struggles at communication so things don't go so well when he encounters other humans, who basically take him to be a walking evil calamity. I really like the overall idea. My biggest gripe, though, is how contrived the whole "oh no, he's evil!" thing is. One of the tropes I hate the most is where the story's misunderstanding is sustained by idiocy on both... more>> sides. Here, the adventurers keep sidestepping obvious possibilities and jumping to the word possible conclusions for the MC's actions and the MC doesn't make a believably genuine effort to clear things up.
Spoiler

The worst part is in chapter 11 where the adventurers are all collapsed right in front of the MC, waiting for him to kill them. They all heard what he said -- "won't kill you" -- but instead of realising that he might not be out to get them, they immediately assume he wants to torture them or track them down later and kill them then. Equally silly is that despite this perfect opportunity to talk to them, the MC suddenly decides that he doesn't want to explain himself anymore... obviously because the author isn't done milking this forced misunderstanding. He just heads off and lets the problem fester. Really?

[collapse]
So yeah. Contrivance after contrivance. That said, it's still enjoyable to see the shock his power causes so right now I'd say it's worth reading. Whether or not it stays worth reading depends on where the author takes it. The story does have a lot of promise. <<less
1 Likes · Like Permalink | Report

Interesting premise, interesting characters, interesting humor... abysmal writing style It's your staple BAD japanese novel Forced obliviousness: check
Irrational development: check
No plot: check
No character growth: check
Multiple POVs that bring nothing to the development of the story and just repeat the exact same thing over and over and over again: check
MC dense as F: check The humor relies entirely on misunderstandings and multiple POVs, but the author forces them to the point of shattering common sense to keep the gag going, too far, too fast, he's saved multiple people but... more>> no one cares, supposedly everyone fears him because news from his initial misunderstanding arrived in the papers before he himself gets to the next town but no word of his good deeds is ever mentioned. The story develops like this in EACH ARCH. *undead see people, approach to chat* "aaaa! undead!" "undead no can speak" "AAA! undead! kill him!!!" *nothing harms him* "AAA! undead no harm" *big monster shows up* *undead kills monster saving everyone* "AAA! undead scary!!" *undead moves on because he no talk with them* Break in a couple of chapters where talks with other undead just to make it frustrating that he doesn't talk to people, and then REPEAT EACH CHAPTER FROM DIFFERENT POVs... rinse and start over in a different town. I actually enjoyed the first couple of chapters... then I began skimming them, I don't find this funny or interesting anymore, it doesn't even try to be consistent or keep the tone up and the rhythm is terrible because it's broken to pieces by each repeat POV. I'm guessing this was thought as a manga because it doesn't make sense in novel form... but I can feel that it would probably make a good manga because the fighting scenes are good enough, and there is enough meat in it to do something usable... but in novel form it's disappointing. EDIT: you know what? after reading other reviewers I'm gonna keep going, because I want to see what happens, I'm just gonna skim whatever seems boring. EDIT2: OK... I read everything available... it does get better but I'm still iffy on the humor... <<less

The premise isn't that bad, but the plot doesn't really keep moving forward. It's a repetition of the same events over and over again in different places and with slightly different people, and because the MC can't utter a single word, nothing changes. And you'd think there'd be a chance for him to approach people elsewhere, but because the world has undergone an industrial revolution in the time the MC was dead, they have newspapers and fast communication which means everyone knows of him and is afraid of him the moment... more>> they can see his appearance. So rather than an undead who tries to die and ends up finding a purpose in some adventuring style story, it keeps being a misunderstanding type one, and not in a particularly humorous way like Tilea's Worries. Add to all of that the fact that basically everything is retold from a different point of view at least once, sometimes even in the same chapter. With this many switches and retellings, the author should have just abandoned the concept of telling the story from first person to begin with and tried to tell it from both perspectives at the same time. For now I will keep reading it, but to sum it up in one word, this novel is boring. <<less
0 Likes · Like Permalink | Report

I like this story quite a bit. You do have to be able to laugh at his non-existent communication skills. It's a bit frustrating that even though he never harms anyone, that everyone is so terrified of him and interprets his actions in the worst possible way. On the other hand, I feel like that's justified somewhat. Even when he's trying to restrain his mama, he's still an Undead, probably the strongest undead ever to exist in that world. I imagine that his energy feels utterly terrifying to the living. I'd compare... more>> it to the presence of a Great Old One. Even if Cthulhu didn't want to harm you, you'd still go insane if you met it. Here's hoping the MC makes a friend soon though. I feel bad for him. <<less
0 Likes · Like Permalink | Report
Advertisements
Leave a Review (Guidelines)
You must be logged in to rate and post a review. Register an account to get started.

Rise Of The Greatest Magician
Advertisements