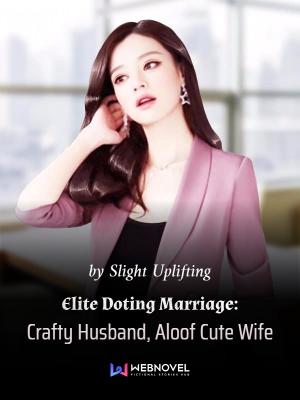 Status in Country of Origin. One entry per line
1895 Chapters (Completed)

Wen Xuxu is a tenacious, talented, smart and brave woman who was fostered by the Yan family at the age of four when she lost both her parents.

Brought up to be the successor of a huge conglomerate, Yan Rusheng is an aloof, intelligent and arrogant man who is the most sought-after bachelor in the capital city.

Despite growing up together, both of them seem to treat each other as an eyesore. She labels him as a jerk and womanizer while in his eyes, she is a shrew.

Over time, they fall for each other, but they continue to conceal their feelings for each other. By a twist of fate, they are forced into a marriage. And unknown to everyone else and Yan Rusheng, she has harbored a deep secret for many years…

One entry per line
最强宠婚：腹黑老公傲娇萌妻

These are recommendation lists which contains Elite Doting Marriage: Crafty Husband, Aloof Cute Wife. You should give them a visit if you're looking for similar novels to read. Alternatively, you can also create your own list.
More Lists >>>

There's nothing amazing about this story. It's a cliches on top of one another but it's not that bad to the point I want to slam my head against the desk. It's definitely not as bad as all the one-star ratings seems, but not as good as the five-star ratings make it out to be.
Spoiler

Also MTL'd so I would be able to figure out why the ML is such an a-hole. 157 chapters in and the only thing ML has just realised is that he's fallen for MC. This is of course after 40 wholesome chapters of him getting super upset over MC's interactions with the second ML.

[collapse]
tldr; Cliche story about childhood friends (ML = overbearing, rich, president type while MC = indecisive, plain Mary Sue) who have secretly fallen in love with each other and are forced together to marry (157 chapters in and there hasn't been much mentioned in relation to the description given). Rating: 2/5 but second ML makes it a 3/5 Would I recommend: Only if you're bored OR have a thing for these kind of tropes... or maybe you want to read a Qidian story...
10 Likes · Like Permalink | Report

Pretty ok read to pass time with. It isn't as triggering as other stories of such genres, wherein the misunderstandings are mainly contained between the FL and ML. Initially FL is insecure and dare not confess her unrequited feelings for ML. I do not blame her as ML's actions repeatedly discourage her from doing so. Side characters do not take center stage much and serve as background noise. This is a bonus for me as I've long grown tired of stories w extensive focus on redundant characters. Review by user... more>> Notawordybir is pretty comprehensive and touched on many points that I agree with. <<less
1 Likes · Like Permalink | Report

Nope...I have read many Chinese novels in this genre but this just doesn't do it to me.. first ML acts idiotically. Then he tries to express his love but FL is making excuses in her head for everything nice he does. This couple will never go anywhere...
1 Likes · Like Permalink | Report
Leave a Review (Guidelines)
You must be logged in to rate and post a review. Register an account to get started.

Hazel – The villainess who refused...