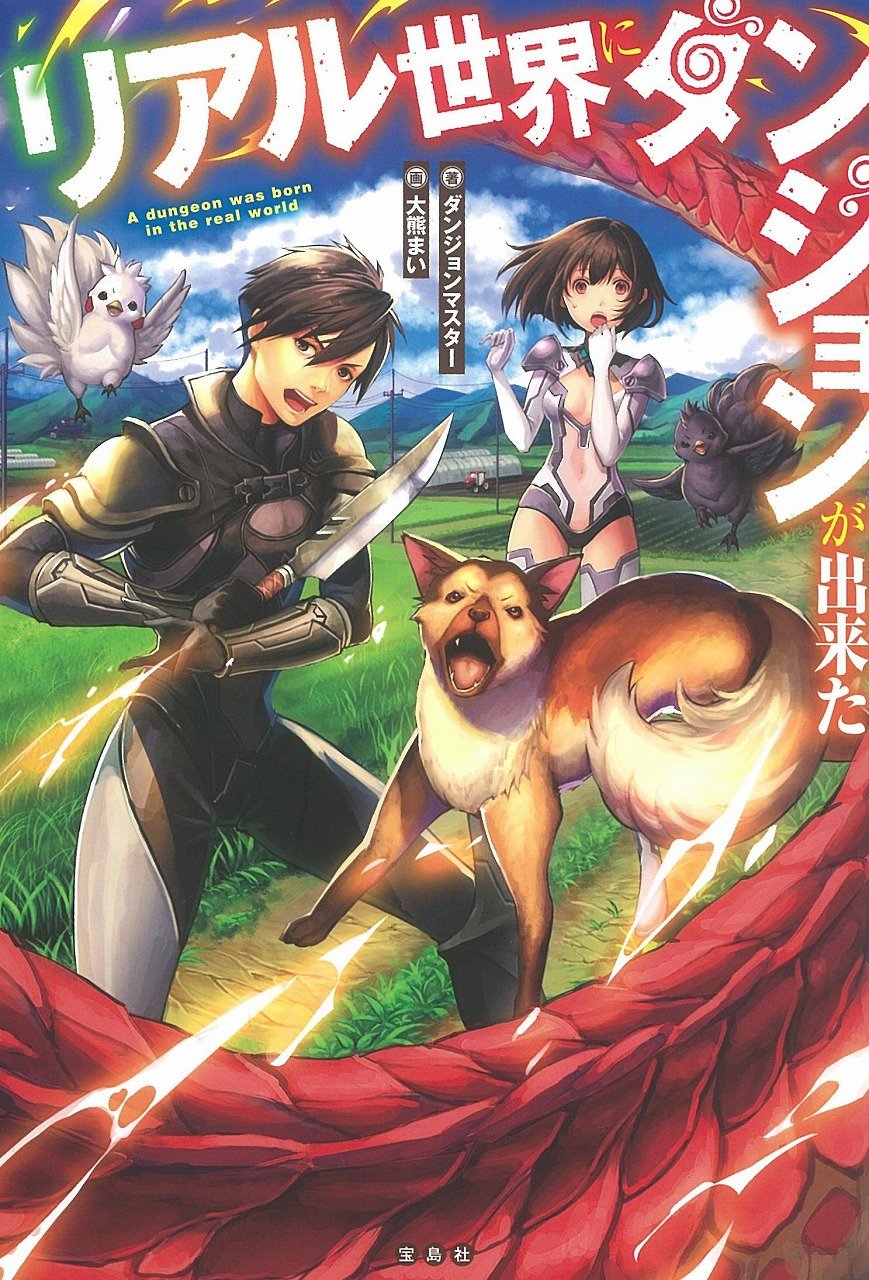 Monsters wander about in the dungeons, and strength is gained by defeating monsters.

Those who conquer such dungeons are called Seekers.

The protagonist is a simple farmer who lives in the sticks.

One day, a dungeon appears in the garden of his house and in order to decide what to do, he enters the dungeon.

That dungeon wasn’t much compared to the dungeons the protagonist knew and was clear he would be able to handle it somehow.

He decided to conquer the dungeon while doing farmwork.

A protagonist who does both farm work and dungeoneering.

In his future lies…….

Everyone Else is a Returnee (2)
The World Is Overflowing with Monster, I’m Taking a Liking to This Life (2)
My Room Has Become a Dungeon’s Rest Area (1)
Seoul Station’s Necromancer (1)
Dungeon Maker (1)
The Hidden Dungeon Only I Can Enter (1)

These are recommendation lists which contains Dungeons Appeared in Real Life. You should give them a visit if you're looking for similar novels to read. Alternatively, you can also create your own list.
More Lists >>>

This was a slightly interesting slice-of-life, but the author has purged the WN. Not worth starting anymore. The translator has said: "I’ll continue the novel with the books but only the chapters that are equal to the web novel." That has manifested in a totally butchered experience for a novel that was already limping at best, as the translator skips chapters at their discretion to 'approximate' the WN. "Do. Or do not. There is no try!" - Yoda
12 Likes · Like Permalink | Report

It's a pretty interesting read for me. Well the novel is about the story of our MC capturing the dungeon that appeared in his garden with the help of his pet dog Pochi. In short this was a slice of life dungeon story! Story wise it's pretty laid back and you could just read it at your own pace. Also regarding the 1-star review, 'twas already explained that using cold weapons or barehanded rather than guns would make the seeker more powerful (gaining exp) compared to zero when they use guns.
6 Likes · Like Permalink | Report

So... I read the prologue.. Aka Chapter 0... and it literally explains why people no longer use guns. I couldn't help myself but make this review just to counter "Baabaablack"'s ignorant review. ... more>>
Spoiler

And quite frankly it's hardly a spoiler, since it's a well-known reason for any dungeon-like worlds. The gun / firearms don't allow you to harness any powers when slaying monsters in/from the dungeon. So you need to use the so called "cold" weapons, such as swords/axes/knifes etc. It's pretty much the general reason to get rid of any science-based weaponry. So basically any weapon that requires you to exert your own strength is allowed, even a bow. Anything explosive and makes use of chemistry isn't 'allowed' (gun powder / bullet).

On a side note I always wondered about bows and crossbows. Bows I understand, you use your own muscles to align your power and coordination into a succesful shot. But crossbows make use of a mechanism to shoot the bolt. Which isn't unlike a firearm, the only difference is that the firearm makes use of an "explosive device", the bullet. I guess it's the 'chemistry' reason again. Answering my own question, yay.

No need to comment on this spoiler section. I'm just rambling. lol.

[collapse]
~~~~~~~~~~~~~~~~~~~~~~~~~~~~~~~~~~~~ To make this a proper review I also decided to read chapter 1. Aside from Chapter 0. The rest of the story reads like the farmers soliloquy. In other words you constantly read about his thoughts and actions. The sentences are short and easy to read. A couple of sentences are awkwardly worded or improperly placed, but not to the point you can't understand what's going on. Just a minor irritation if you're a grammar nazi, otherwise it's okay. It actually seems like a decent enough read to pass the time. So I think I'll keep at it. <<less
5 Likes · Like Permalink | Report

Too early to rate, but I'll go 4 for now so people will give it a chance and read. But the translation is getting better. Much easier to read than the first few chapters. Digging the story so far. It's a laid back slice of life about a guy finding a dungeon on his property. He dives in with his dog and kind of wings it. I like the casual feel. It makes a nice change of pace from revenge novels. And refreshing, since most dungeon novels seem to have harems,... more>> which I cant stomach anymore. Looking forward to the story. <<less
3 Likes · Like Permalink | Report

Definitely a Slice of Life with a Dungeon Story-line. One aspect I found interesting was that items you had on you also gained power (leveling up?) as you descended the dungeon (who else would wear plastic/costume armor?). This story had a lot of unique aspects, not to be found in other stories. This, above all else, is likely why I kept looking forward to the next installment. There was always "that little something that you just can't put your finger on" that kept me reading and wanting more. Having read the original, I've... more>> found this translation somewhat lacking. Apparently the author simply tossed most of the novel when it was published as an actual book. This causes the reader to feel like something necessary wasn't explained at some points - this is actually similar to what happens when light novels become manga, with most of the content removed. Unfortunately, although the first novel was interesting (giving that new world explorer feel), things didn't really start to get moving until the around chapter 170 (which would have been in the second novel). And then the author just said the hell with it, apparently. They went and started writing a different work around that point. Not long ago, they deleted all their online accounts, as well as the original version of the books. <<less
2 Likes · Like Permalink | Report

The story was interesting, but there are gaps in the story and it is assumed you know what happened in those gaps. Thus the flow is choppy and there are confusing parts where you must use your imagination to fill the gaps.
1 Likes · Like Permalink | Report

Slice of life dungeon hunting. And the MC doesn't even realize that he's OP due to him living in his own farm and not interacting much with other people except his family. You can see from the v2 extra (no it won't spoil the story too much) that this LN is light hearted
0 Likes · Like Permalink | Report

This story is cute and heartwarming, and it's really a fresh read to me. The story about a dungeon appearing at a farmer's garden in a modern age. The dungeon appear phenomenon is still quite new to the world, so there's many things that will be discover. This is a story about the famer and his dog trying to conquer the dungeon slowly while gaining power. Other character will come join him in the future. Give it a try
0 Likes · Like Permalink | Report

Good interesting start of the story. Sometomes it's difficult to read don't know if it's the translator or the author. Still it's an okay read with an okay premise. Rating will go up or down depending on later chapters. Since updates are pretty much once a month be ready for a long ride.
0 Likes · Like Permalink | Report
Advertisements
Leave a Review (Guidelines)
You must be logged in to rate and post a review. Register an account to get started.