Novel Updates
RegisterLogin
Theme
Search
Your changes has been saved.
A Loner With The Trash Skill ‘Abnormal Status Doubling’ 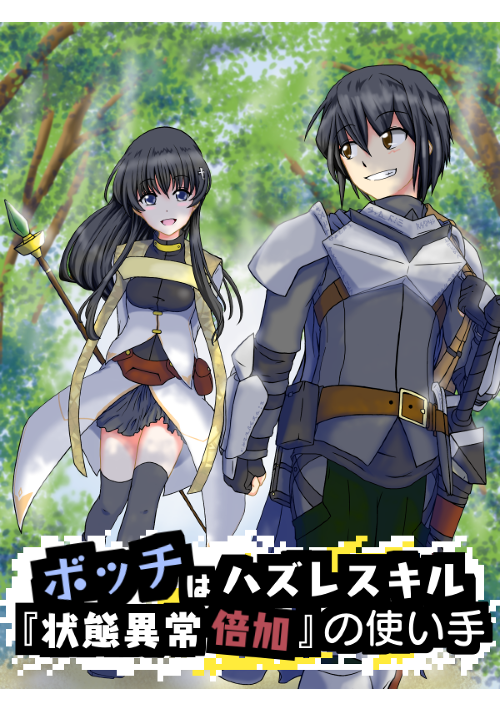 One entry per line
水源＋α

Status in Country of Origin. One entry per line
53 Chapters (Ongoing)

It all started when a minute before we began morning activities, something suddenly occurred. The floor started shining a dazzling light, the shining expanded in an instant, and 30 classmates, including me, were laying on top of a place we didn’t recognize.

After that, we met a king-like person who said “I want you to look for the seven swords.” Everyone refused at first, but since I wanted to stay in this world, I opened the mouth I kept closed up until that point.

Then when I checked my status, I had nothing but surprise.

There was only one reason for that─

Everyone’s initial skills given to them were strong skills, but in contrast, the skill I was given went way too far into the ‘bad skill’ territory. It was an abnormal status doubling skill.

Every Morning the Most Popular Girl at School Sits Next to Me on the Train (1)
Stop, Friendly Fire! (1)
My Inseparable House Guests (1)
No Fatigue: 24-jikan Tatakaeru Otoko no Tenseitan (1)
Omniscient Reader’s Viewpoint (1)
Other World Assassin Life of a Man who was a Shut-in (1)

These are recommendation lists which contains A Loner With The Trash Skill ‘Abnormal Status Doubling’. You should give them a visit if you're looking for similar novels to read. Alternatively, you can also create your own list.
N/A

okay, this novel is different than most other isekai novels. This one in particular actually has a goal, find the seven swords and defeat the Demon King. The only problem is the MC is freaking dense as hell. alrrrrightttt, shun is the protagonist he isn't strong but has a weird job and his ability isn't strong either (as far as I know). My honest opinion, I would definitely enjoy this as long as the MC isn't that dense and isn't much of a pu*sy (kinda a pu*sy already).
4 Likes · Like Permalink | Report

No reviw well okay so forst 😁 This novel starts out like many this guy sits in class halv sleeping sudenly a femal voice its the class beautie who talks to him casually what makes him hated by the boys in class then while those two talk a male voice the class ikemen also talking casually with him which earns him the hate of the girls in class. Boom the floor glows their summoned to a different world read their status he got a crappy stat like 100 at all stats... more>> and the said double abnormal effect asks friends the ikemen got like a skill halving the training time you have to do to earn sword skill, also has the effect to keep the swort sharp and rust free the girl gets godess healing whats like full heal and also attaches auto hp recovery (not said if for some time or forever) if you wanna start reading this story start at the halve of ch 2 Spoiler (i have ne idea how to make that tap) Because there it get interrestening they line up at a krystall ball to get their class you know swordsman mage etc as MC touches the ball goes black and the king orders the knights to capture him hes a dark knight and thats demons only or something MC runs away in the castle his friends rebell the icy princess saves him thats the end of ch 2 Spoiler end honestly I think it can become greate he got a bad skill but a class no human has if he works hard he can become op and survive <<less
1 Likes · Like Permalink | Report

This should be tagged as yandere novel too.. This novel is interesting.. The story just flew like, easy to read.. What most interesting part to me is when he run away when being captured because his job and ended when he accidentally went-in in princess room and act like pathetic animals.. Super funny..
0 Likes · Like Permalink | Report

Kind of cliche but has its good points. Feels kinda like a romcom than the typical stories with similar setting. No ntr, backstabbing, betrayals, etc. Nothing dark. Everyone is nice, royals are decent. The classmates and friends are all nice, they would even side with MC, where other stories would have him abandoned. Some parts irks me but that's probably just the way the characters are. For example, saying they didn't look like kidnappers even though it doesn't change the fact that they were kidnapped (aka summoned).
0 Likes · Like Permalink | Report
Leave a Review (Guidelines)
You must be logged in to rate and post a review. Register an account to get started.