Novel Updates
RegisterLogin
Theme
Search
Your changes has been saved.
Why Are You Doing This, Duke?

Home >
Novel >
Why Are You Doing This, Duke? 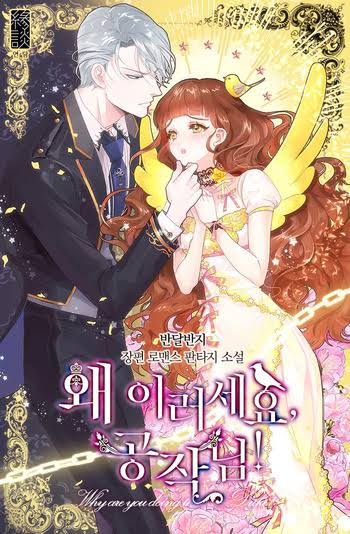 One entry per line
Half Moon Ring
반달반지

Status in Country of Origin. One entry per line
3 Volumes (Completed)

One entry per line
Yeondam

Erin Samed, the Count’s illegitimate child. Just before being sacrificed on behalf of a family who has become a traitor.

She faces the “god of death” who came to take her life!

‘Please help me! I want to do something like this!

I could not wear a pretty dress at her blooming age.

Her only wish was to live with courtship and love.

For her, a magic spell is activated like a miracle

“Please forgive me, my lady, for my insolence.”

“Marry me, Master of my soul.”

Is he courting her?

‘What the hell is this?’

Struggling to survive between ‘two husbands’

Lucia (2)
Hard to Escape (1)
Sweet Heart in Honeyed Desire (1)
Due to a Mishap, I Gave the King a Love Potion to Drink and I Became Queen (1)
Outaishihi ni Nante Naritakunai!! (1)
The Tyrant’s Tranquilizer (1)

These are recommendation lists which contains Why Are You Doing This, Duke?. You should give them a visit if you're looking for similar novels to read. Alternatively, you can also create your own list.
More Lists >>>

The story basically went like this I like how their relationship gradually changes. It wasn't one of those story where they falls in love from first sight.
33 Likes · Like Permalink | Report

I'm reading the manhwa of this its good! The MC is an unwanted child. So this ML came to execute all of them. And was about to execute the MC but MC doesn't want to die and accidentally done some "magic" that makes the ML fall inlove with her instead!... more>> What's the good part of this story is when the magic weakens! And the MC loving the ml. Ugh. Its so sad when she feels that he just love her because of the magic but she can't do anything about it because she had to survive 😭😭. I want more of this. And the ML is cold blooded so whenever the magic weakens his attitude really changes! From loving to scary 😂 <<less
14 Likes · Like Permalink | Report

It's a nice premise but is unfortunately ruined by the translation quality. The leads are believable. Female Lead: She's told to face death with a smile but while doing so, deep down she's still very afraid. She loves the ML because he's the first person to show so much kindness and love to her, but she knows he's only doing so because of the "wish", nevertheless she just can't help herself. Male Lead: After having regained his clarity, he's very rightfully angry, thinking that she was the one who did this to him,... more>> however before he can hurt her he turns back to his "love love" self. This keeps happening back and forth and his response to her gets warmer as they get to know each other in his regular self. Their romance is sweet:
Spoiler

It starts off hostile, the ML wants to hurt the FL but the FL doesn't want to die, not just because death in itself is scary, but also because it is done so by the person sharing the body of the man she loves, she would rather be killed by anyone else but him. Then they slowly warm up, the ML learns and accepts that it's probably not her who put this "curse/wish" on him and he finds it harder and harder to raise his hands and voice against her the more they interact. After awhile, he even finds himself falling for her but is very awkward in his show of love and even feels jealous of himself. He wonders if she truly loves him because of how much she seemingly loves his "alter ego" who acts unlike him.

[collapse]
I recommend for anyone who likes this story to skip the novel (I apologize to the translator) and go ahead and read the manga. The manga doesn't have the issues that the translated novel does and is even currently ahead of its novel counterpart (which is usually why I read LN). It also has pictures! <<less
9 Likes · Like Permalink | Report

The story is very obviously and entirely MTL. The translator doesn't make a single effort to disguise this fact, there's absolutely zero edits and its quite frankly a huge mess. I do think it's quite bold for the translator to ask for Kofi donations for MTLs. From what I can make out after braving through the MTLs, the bare-bone story seems quite typical. I've definitely seen this plot done before. I will not rate this story as the subpar quality of the translation has greatly affected my enjoyment of the story.... more>> I may check out the manhwa instead! <<less
8 Likes · Like Permalink | Report

This novel gives me a good laugh xD The plot is quite unique because the ML has dual personality cause by magic. Meanwhile you have to bear with some of Mc's foolish actions. For those who like clever MC, I dont recommend this. But those who like light romance comedy, then I totally recommend this. This novel has manhwa too and the drawings are nice. Read the novel and the manhwa for double fluffs and laughs!
5 Likes · Like Permalink | Report

Why are you doing this duke?! *flips table* Why is he doing this!? B*tch! You’re taking advantage of whatever mind control magic you managed to activate, to leech off his status as a duke, to blacken his reputation and image as the bad ass that he had been, messing with his head, much less the extremely dubious consent content of your bed time together! What right does this character have to do all of these things huh? If all she wanted, (like the first chapter hinted at) was to survive and... more>> live a happy and fulfilling life, then after the duke spared her from his blade, she should have collected her things and made a run for it! But did she do these thing? Much less make even a token attempt to apologize and leave to seek her own fortune? No. This opportunistic, self centered, amoral, rapist, of a woman was too comfortable, too cowardly to do any of these things. Instead of coming clean, instead of leaving like a character with integrity and self worth would have, this bastard daughter does just like a cannon fodder thot would, and directly decides to stay, and does her damn best to make sure her mind warping magic *stuck* so she can continue living in the lap of luxury with a powerful man lapping at her heels like the brain dead, love sick, puppet of a man she prefers. She prefers that over sincere emotions cultivated with honesty and trust between two equal individuals. I’m sure, because she was raised as a bastard, unwanted daughter who didn’t grow up with a healthy relationship to strive after for herself, but still, that doesn’t give this character the right to bemoan about how cruel the duke is treating her. what a green tea wretch. It won’t happen, but I really hope the Duke escapes from her clutches and cuts her head off for violating him and making a fool out of him. <<less
2 Likes · Like Permalink | Report

The plot and comic sense of this novel is unique! I started reading the manhwa and search the novel on the Search for more of the duke. The MC that it is not a dumb girl, but a Strong woman.... She is one of my favorites heroines so far
0 Likes · Like Permalink | Report
Leave a Review (Guidelines)
You must be logged in to rate and post a review. Register an account to get started.