Novel Updates
RegisterLogin
Theme
Search
Your changes has been saved.
Advertisements
We Live in Dragon’s Peak 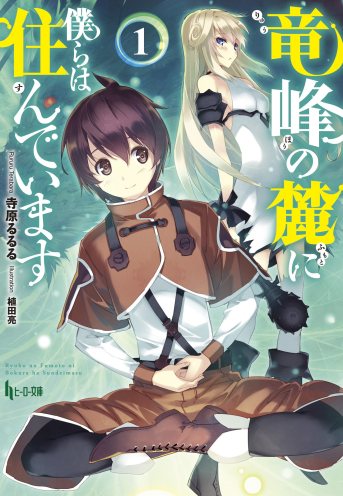 One entry per line
Ueda Ryou

Ernea, a boy who yearns after the Hero.

At the west side of the Dragon’s Peak is where the Dragon tribe and the Dragon men inhabit, the north side is where flying Dragons are hunted, at the south is where the Forest of Dragons is spread out & the Capital city of the kingdom which had a connection with the dragons wherein he was brought up in. His everyday life before he turns into a 15 year old and set off on a journey, he worked hard with the students of his class there

A certain day where he needed to go to the forest of dragons for the sake of obtaining his daily food provisions, thereupon is where he had a chance meeting with an Ancient old Dragon.

I want to have many brides like the hero and become happy!

I want a bride with a big chest!

However, a bride who brandishes a blunt weapon is scary

Breakthrough with the Forbidden Master (1)

These are recommendation lists which contains We Live in Dragon’s Peak. You should give them a visit if you're looking for similar novels to read. Alternatively, you can also create your own list.
More Lists >>>

Be warned: THE MC IS A SHOTA AND A SCAREDY-CAT. That being said, this was at chapter 22. I hope he gets better. Not asking him to be on the level of yun che, but it'd be nice if his balls dropped a bit. Outside that, the story is amusing and semi-original, the tler is funny (but his tl notes are distracting AF) there is action, there is a**holes, and HERE THERE BE DRAGONS! I'd give it 3.5 or 4 outta 5.
16 Likes · Like Permalink | Report

Just a fun interesting story, where there are actually a lot of characters that get developed well through out.
7 Likes · Like Permalink | Report

Not a reincarnation story so the slow character development makes the serie look like slice of life with action and dragons here and there. MC is wimpy and gets made fun constantly (specially by that damn cat-dragon leaking all his thoughts) but on later chapters he grow some balls and realize his mistakes, but he hardly gets angry (in 120 chapters think he got angry 3 times only.. it pisses me off, saint much?) His teacher (dragon) turns him into a cheat slowly and OP harem members get thrown... more>> at him for diverse reasons with a little of backstory and a little of character development as well. Plots aren't very clear as of ch 100 -_- stuff happens here and there, he meets all kinds of dragons and dragon people, IF you need a plot to get hooked, it ain't happening but if u like dragons and char developments... you will regret this doesn't get picked. <<less
4 Likes · Like Permalink | Report

This could be a great novel; it seems to have great reviews. But the first translator utterly killed it for me, between awkward grammar, fragmented sentences, and utterly pointless translator remarks such as " (TLN: Gaaaayyyyyy) ". 2/5 until such point as someone redoes the first 30 chapters, and only not 1/5 because it'd be unfair to judge based on translation quality alone, as the author was not at fault.
3 Likes · Like Permalink | Report

The MC is super weak in both body and mind. Even when he get's decent strength he still runs away and cries all the time. The first 20 chapters feature the word "frightened" at least 3 times a chapter since the MC seems to be permanently in that state. The big reason I dropped this was how they handled the love interests. Without spoilers, the first love interest is super strong which is great as it gives the MC something to strive towards. The second love interest has average strength, about the... more>> same as the MC which I was super happy about. But then the author thought she wasn't strong enough so gave her an ability which basically makes the MC super weak against her. It's so annoying that they keep making the MC look like a weak kid whereas the woman and strong and powerful. <<less
1 Likes · Like Permalink | Report

The best parts of this story are doubtlessly the harem and when Ernea fights with competence. His personality, particularly out of fights, can be a constant annoyance. He's not particularly weak once the story gets going but he acts like such a wimp all the time. The first 7 chapters really drag because nothing particularly interesting happens (the utter lack of editing does not help new readers either, someone needs to go through and fix it up or something, lol). Once chapter 8 comes along, things start moving a bit more, ... more>>
Spoiler

because his first waifu, Mistral shows up. She's pretty likable even from the start and it doesn't take long before she accepts being his fiancee.

[collapse]
After that, the story also looks up in chapter 14,
Spoiler

Ruiseine, a shrine maiden, seems to be attracted to Ernea. He saved her previously and her general feelings toward him are revealed at this point.

[collapse]
I think perhaps the chapter that made me the most optimistic for this story was chapter 42,
Spoiler

where Mistral suddenly declares that Ernea must take Ruiseine as his second bride. I always feel the warm fuzzies when a waifu supports the harem.

[collapse]
All in all the story is not bad. It keeps things interesting and not too annoying sufficiently that I'm definitely going to keep reading. While the editing can be lacking (particularly in the earlier chapters), once you get through it it's not bad. As of chapter 44, I'd recommend this. <<less
1 Likes · Like Permalink | Report
Leave a Review (Guidelines)
You must be logged in to rate and post a review. Register an account to get started.