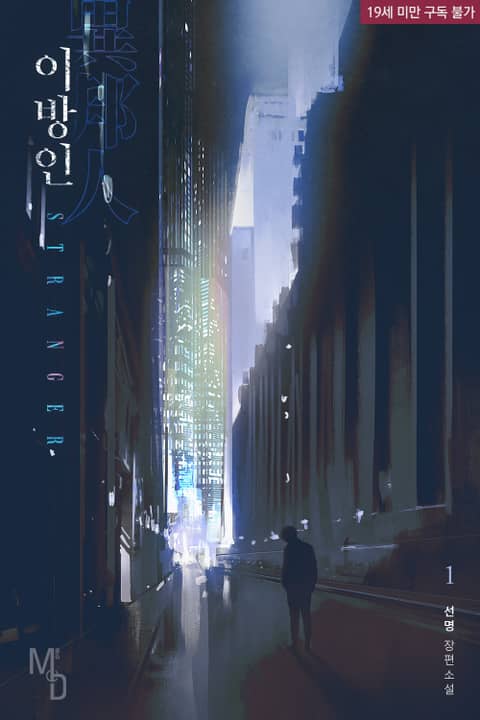 One entry per line
선명

Status in Country of Origin. One entry per line
Completed
5 volumes

One entry per line
MoD
RidiBooks

One day, Kim Jiho, who earns a living by pickpocketing on the street, leaves the facility he was living in after being hit by the owner of the facility. After walking on the street endlessly because he has nowhere to go, he sits down in front of the road and thinks.

If I get hit by a car and die here, it’d be good if it’s an expensive car.

While he was thinking like that, an expensive car stops in front of Kim Jiho, and the man who rides that car asks.

“Wanna hop in—If you have nowhere to go.”

Kim Jiho, who thinks there is no goodwill without hidden intention, makes up his mind and follows the man. But the man doesn’t make any demands after taking in Kim Jiho.….

One entry per line
이방인

These are recommendation lists which contains Stranger. You should give them a visit if you're looking for similar novels to read. Alternatively, you can also create your own list.
More Lists >>>

Not a cliché couple. While the mainstream is usually a pitiful uke meet the perfect seme, this one is the opposite. Their dynamic flow smoothly and doesn't feel forced. The MC is someone young people can relate to. Like how he's awkward, mess, and such. He doesn't want to show the bad, the lowest side of him to the one he loves. The ML on the other hand is a caring and understanding person. My favorite line from him is, "... I have to know the lowest point of you... more>> so that I can protect it."
Spoiler

I can't move on from Yeon Woojeong. He is kind of realistically good adult, although what he did in the chapter 4 before their first s*x is really questionable.

I like how he is really mature in handling Jiho. He is patient with every childish tantrum (?) Jiho made. Meanwhile, Jiho is kind of simple-minded and the way of his thinking is funny to me. They never say 'I love you' to each other, but that's not the important one in this story.

Let's not talk about the smut. It is well done. This is my first time to find an experienced straight uke who is shameless and teaches the inexperienced and innocent seme.

[collapse]
To put it simply, this story is about how a human being named Kim Jiho met Yeon Woojeong by chance, and how he slowly learned to accept the world and love himself. <<less
29 Likes · Like Permalink | Report

Jiho has grown up only with violence, his past is extremly dark and hard. He is very sensitive but the only feeling he knows is Anger. He is very wary, a wild child who doesnt know his own emotions (when he is sexually aroused he thinks it's a murder pulsion).

He doesnt understand the prosecutor way of acting, and he is both irritared and attracted to him..

On the opposite, the prosecutor is someone with education and clever but much more cold in his emotions. He cares for Jiho but his behaviour is special.. He likes making fun of him and teasing him in a childish way. He is someone patient so he won't be mad at Jiho but he has a complicated mind too, in a different way than Jiho.

Jiho is the narrator so it's much more easy for us to understand and appreciate him. The prosecutor is a bit a mystery sometimes.