Novel Updates
RegisterLogin
Theme
Search
Your changes has been saved.
Advertisements
Skill Up with Login Bonus 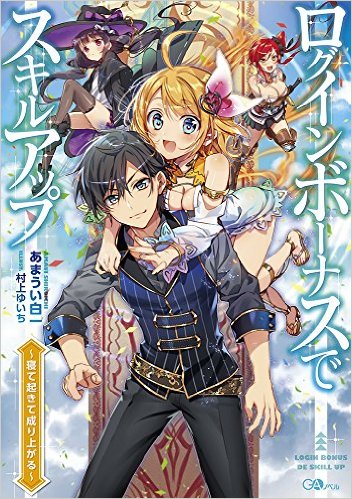 One entry per line
Murakami Yuichi

The more I sleep the stronger I get.

My grimoire give me new skills and magic as I wake up every day! Everyone else tries hard to memorise and understand their grimoires and gain new magic or skills, but for me, I get them automatically.

What I get all depends on my luck, but I can easily acquire the highest tier magic. While holding onto the grimoire like this, I enjoy my time in another world with my wife and friends that I’ve made here.

One entry per line
Login Bonus de Skill Up
ログインボーナスでスキルアップ～寝て起きて成り上がる～

These are recommendation lists which contains Skill Up with Login Bonus. You should give them a visit if you're looking for similar novels to read. Alternatively, you can also create your own list.
More Lists >>>

Mediocre. Just Mediocre. Like majority of the people here, I believe they were lured in because of the word 'Wife'. Well let me tell you straight, They're not even in that sort of relationship, More like one sided-ly decided by his Grimoire, Nothing wrong with that but the MC doesn't consider their relationship to be one at least just the way I see it because certainly they don't act remotely close to being Intimate. You're going to be disappointed if you're expecting some Light hearted with a dash of romance here and... more>> there. As for the story and blah blah. Its the same thing you see before, I mean there's nothing wrong with not doing something new but at least develop your freaking World and Characters. We barely even know about the MC's circumstances as if the body he took over doesn't matter. Writing is grossly short and you could skip a chapter and you wouldn't miss a thing I kid you not. Basically this is a Self-fulfillment story where big status people gets shocked at how big MC's genitals are. There's better Self-fulfillment story out there, Go read that. But I always say, Check it out before dropping it immediately and I said my piece already. <<less
6 Likes · Like Permalink | Report

I'll be frank, I want to like it, the genre and the tags all seem right up my alley for a nice and hopefully somewhat heartwarming or fluffy story. Though I suppose it is somewhat there, it isn't actually developing in the romance department, or the story, at least not in any particular meaningful way that shows the machinations of things really happening and going forward. I suppose I can somewhat recommend it, but it is more of a casual slice of life story than much else at this point.... more>> So I suggest reading it as such, rather than some epic tale, journey, or adventure. Right from the start our protagonist gets a wife (so to speak? neither side seems to take that part or path of relationship). It had me yearning for at least some level of lovey dovey attitude or them warming up to each other in some way... that doesn't happen (yet?). Like not even an inkling of showing that it will happen as such.
Spoiler

The girl called Flame might be involved in the harem romance, but at this point she just rubs me the wrong way and seems basically (at least to me) a somewhat unlikable Megumin, but you know, as a warrior. As for our Grimoire girl Soulas, basically just used that term as she basically said "the grimoire getting their other half" And what is up with this backstory about Demon King, Goddess, or whatever she is?

[collapse]
Thus far I think the best way to describe the story so far is as a slice of life, somewhat lackadaisical fantasy story with a promising plot that may or may not be executed well. Just like the character's luck at randomly getting either a super OP spell with limited uses, to a trivial spell that can only be used in daily life, that about sums out how uneven the story gets.
Spoiler

Looking at that particularly story development how he randomly ended up learning an unlimited use royal magic (but has to be recharged by special means at the royal palace?) as his randomly daily login bonus, which is crazy showy and had randomly teleported to a battlefield, saved a princess from a demon, and because he knew a royal magic he is going to be the princess's "special one?" Oh, and all happened in 1 minute (aside from the fact the teleport spell forcefully randomly teleported him 1 hour after he "learned" it. and he got teleported away, right back to where he was forcefully teleported from... No they don't really explain why he forcefully teleported twice or why no one even instigated it to happen (cast it on him or summon him, etc.?)... its just like that. Naturally he didn't get the chance to tell the princess who he was or why he was there or anything, just *poof* I'm back to where I got randomly teleported from! His attitude just seems to overlook these rather large developments. So yea, I guess now the hunt is on for the next King of the Kingdom? Except you know, in the background since we heard nothing of that after it all happened (yet.)

[collapse]
I probably will not be coming back to this story for a while, wait until it gets up to around chapter 100 or something. There have been small developments in the story, it essentially feels like there hasn't been any actual development aside from testing a newly obtained spell, or a small inconsequential development. This being said, as another reviewer had said, you could probably skip a few chapters and not really miss anything! Not to say (and I suppose this might count as a slow pace) that a slower pace is bad, it just seems to me that it is slow and repetitive. Though if I had to attribute the repetitive nature being because of the execution and story layout of the "login bonus" If I had to compare it, it has the story development speed equivalent of 33% to 20% of a Wuxia like Emporer's Domination or Sovereign of the Three realms (I listed these specifically because these are stories I know that have a good pace that keeps you hooked) The past 34 chapters I read feel like I just read 10 of Emperor's domination in terms of plot advancement. <<less
0 Likes · Like Permalink | Report
Leave a Review (Guidelines)
You must be logged in to rate and post a review. Register an account to get started.

A JOURNEY OF THE FATED CONQUEROR...