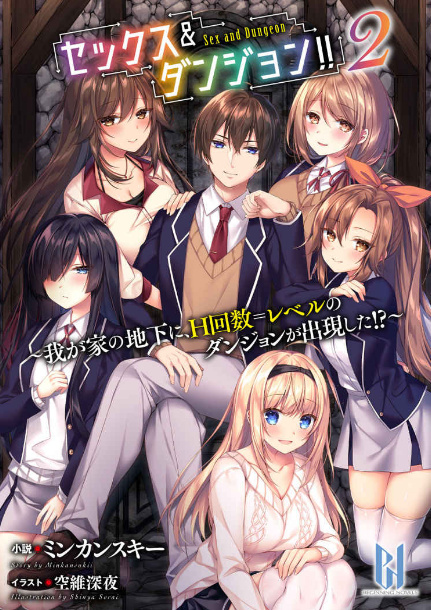 Originally supposed to be a storeroom, one day Saino Sōhei’s basement suddenly becomes a grand labyrinth. But this wasn’t your average dungeon, rather it was where one could raise their (Love) Level by engaging in lewd acts with girls.

Whenever Sōhei acquires a special item from his quests in the labyrinth, he in turn uses them upon girls he likes. But as he further delves deeper into the dungeon, will his relationships with girls change as well……?

This is the story of a boy exploring dungeons, girls and sex!

One entry per line
S*x & Dungeon
S*x and Dungeon!! A dungeon of H times = level has appeared in the basement of our house! ?
S*x and Dungeon!! My basement became a Dungeon, and the number of times I do *H* equals my level... what!?
S*x and Dungeon!! ~Wagaya no Chika ni, H Kaisuu=Level no Dungeon ga Shutsugen shita!
S*x to Dungeon
セックス＆ダンジョン！！ ～我が家の地下に、H回数＝レベルのダンジョンが出現した！？～

Let’s be an Adventurer! ~Defeating Dungeons with a Skill Board~ (1)
Underground Dungeon (1)

These are recommendation lists which contains Sekkusu & Danjon! ! ~ Wagaya no Chika ni, H Kaisū = Reberu no Danjon ga Shutsugen Shita (WN). You should give them a visit if you're looking for similar novels to read. Alternatively, you can also create your own list.
More Lists >>>

I feel a need to explain the tags. Many of them are accurate in that they happen, but they're not an important part of the story overall. Note that the vast majority of items the protagonist gets are single-use, so he'll take a different approach to getting each heroine. Mind Break: Hm... maybe one scene? With basically a good reason to do it and a happy ending. Mind Control: Essentially used once for each heroine, with a different item and different approach. And different results. By the most recent chapter I honestly... more>> forgot the story even had mind control until I saw the tag and thought about it. Netori:... If you have a netori tag, you should also have a yuri tag, and the two girls end up together again in the harem shortly after anyway. The protagonist didn't have any NTR intentions either so it's a shame to have a tag that will turn many people off and not satisfy the urges of anyone looking for netori. prostit**es: ??? If it exists in the novel, there's so little impact that I can't remember. Side note: none of those tags are listed on the original site. The main thing is the loop between exploring the dungeon -> using magic erot*c items to have different kinds of s*x with the heroines -> exploring the dungeon. There's a mystery about the purpose of the dungeon but so far there's not much progress on that front. If you like the idea of a man using magic tools to force/trick women to have sex, the early h-scenes should be decent. If you like harem, the story should be enjoyable. That's my basic recommendation. <<less
26 Likes · Like Permalink | Report

ch75 review A not bad H-novel, it's targeting mostly highschoolers but you won't find it unlikeable even if you are not. There're some plot holes and some illogical settings, but anyway it's a good f*ap.
it deserves 3.5-4 stars max but ill give it 5 for encouragement. The translator is doing a good job but slow release, I hope he will updates more. edit review ch 85: (2 stars) well well well... the story had potential but the author just wanted it to go downhill. ... more>>
Spoiler

the story was going no badly but the author instead in improving the plot and the interactions between the MC and the harem he just f*cked it up by adding another girl to the harem (a blondie) just for the sake of fan service and japanese blondie/foreigner obsession and he ruined the novel. the 4 seasons members (yea we got summer / winter / autumn and spring) were more than enough for the story, there was literally no need to add another (the blondie girl is rainy season, ikr absurd) just for the sake of adding numbers many authors think of harems as the more the better I dont think so, imo quantity cant make up quality in harems.

[collapse]
I think its better to stop at 85 for no further disappointment. If you want more read at your own risk, dont blame me I didnt warn you.
Spoiler

anyway its on hiatus anyway