Novel Updates
RegisterLogin
Theme
Search
Your changes has been saved.
Advertisements
Reborn Girl Starting a New Life In Another World As a Seventh Daughter 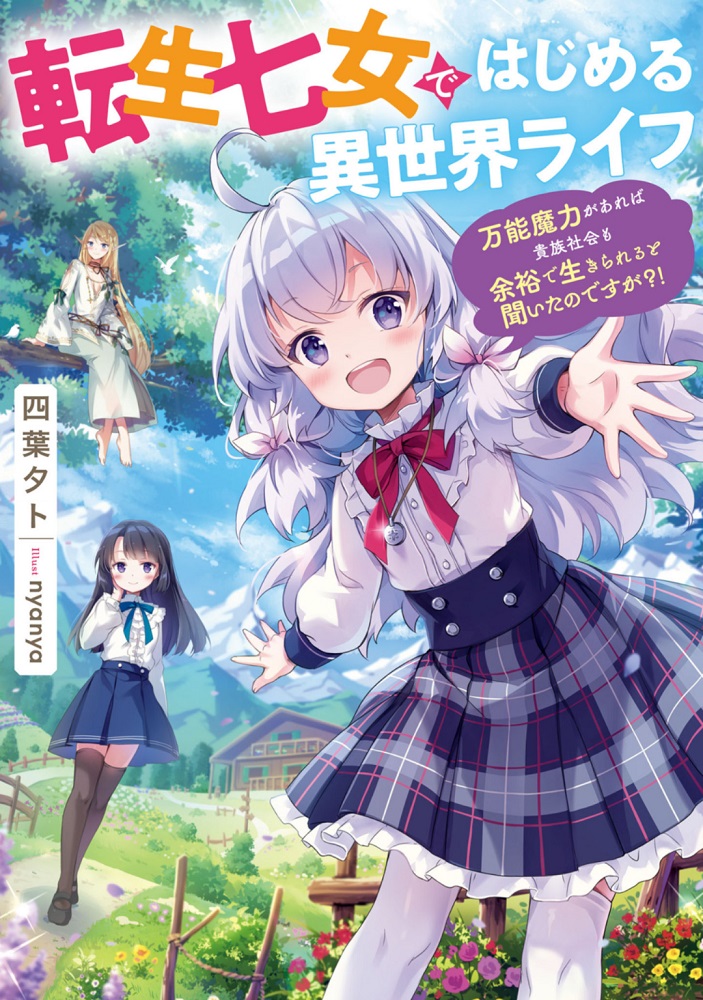 One entry per line
Nyanya

A high school girl, Kanami Miria, reincarnated as the seventh daughter of an aristocrat.

Since she had lived a miserable life, she dreamed of living peacefully in her second life.

However, she reincarnated in a super-poor aristocratic family in the countryside.

The lord was a muscle-brain.

The lady was a pushover.

The eldest daughter was a depressed woman.

The second daughter was a hussy who divorced after she cheated on her husband.

The son-in-law was a lolicon.

Moreover, she was forced to become engaged to a poor merchant.

The situation was even worse than her previous life.

「I swear I will get out of this house and live a peaceful life!」

In order to achieve her goal, she practiced magic and secretly went to the Royal Girls Academy.

「Now my second life has begun! I’ll make friends with cute girls and have a yakiniku party!」

But, thanks to her omnipotent magical power, her evaluation became ridiculous.

「An audience with me? Please, no!」

The easygoing Miria decided to ignore them and aimed for a relaxing and peaceful life with her omnipotent magical power.

One entry per line
Reborn Girl Starting a New Life In Another World As a Seventh Daughter ～I heard I can live easily in aristocratic society if I have omnipotent magical power, though!?～
Tensei nanajou de hajimeru isekai raifu ~bannnou maryoku ga areba kizoku shakai mo yoyuu de ikirareru to kiitanodesuga!?~
転生七女ではじめる異世界ライフ 〜万能魔力があれば貴族社会も余裕で生きられると聞いたのですが？！〜

These are recommendation lists which contains Reborn Girl Starting a New Life In Another World As a Seventh Daughter. You should give them a visit if you're looking for similar novels to read. Alternatively, you can also create your own list.
More Lists >>>

Although this is still the first volume, it has been enjoyable so far. I really liked how the relationship developed between Miria and Chloe from the beginning. The relationship seems fairly standard for most other power-fantasy type novels so far, but it's still enjoyable from what I can tell. It also helps that I'm a bit of a sucker for stories where the main character grows up in poverty and manages to make actual plans get out of said poverty. While there's still the mildly annoying trope where the main... more>> character blurts out a term that only exists on Earth while *she's in a world that clearly doesn't know what she's talking about and would normally raise suspicion, * it is, after all, mild.
Spoiler

For example, Miria will constantly talk about soy sauce and other sauces in front of other characters, even though it's fairly obvious that no one would most likely actually know those terms. If she wants to look for those sauces, she could have simply said something along the lines of, "Ah, this skewer would've been so nice to eat if I had a sauce with these characteristics."

[collapse]
Aside from that, I really do think that this is an enjoyable read for people who likes cute girls doing cute stuff without being overly obnoxious as well as a female protagonist who has op magic written all over it. I'm very much looking forward to what kind of slice-of-life moments the novel can bring. <<less
4 Likes · Like Permalink | Report

The story is quite good imo, relaxed and easy-going. It is a reincarnation, OP MC, being weak to getting strong, but guess what
Spoiler

MC is s*upid airhead, ignorant of her surrounding, don't give a fu*k about common sense.

Why author, why the MC has to be so s*upid when the story is just getting good. I don't mind her being a bit s*upid but that level is s*upid is quite a bit much to me.

I like it, reminds me of Mile from Average! She's pretty dumb but I'm happy to find a FMC in magic school without romance so far. It's pretty light, like comfort food. Don't think too hard, it's just SoL. There's some short-sightedness and such but being what it is and how common-sense lacking the MC is, it's fine.
1 Likes · Like Permalink | Report

So far is has been very enjoyable for me. Her family can be frustrating but overall is it entertaining to read. I love her interaction with her sister and master. This novel have a yuri tag but so far I dont think there is much in that aspect, other than our MC enjoying the company of her beautiful sister and master lol
1 Likes · Like Permalink | Report
Advertisements
Leave a Review (Guidelines)
You must be logged in to rate and post a review. Register an account to get started.