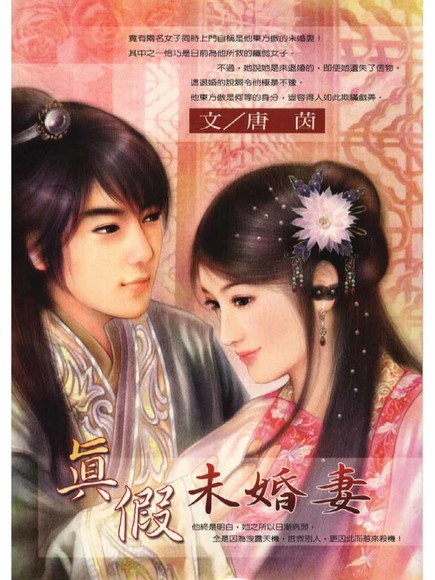 Status in Country of Origin. One entry per line
Completed 10 chapters

One entry per line
飛田文化

These are recommendation lists which contains Real Fake Fiance. You should give them a visit if you're looking for similar novels to read. Alternatively, you can also create your own list.
More Lists >>>

This novel is very short only 10 chapters..... The story is basically 2 women trying to prove they are who they say they are (the fiance) while keeping secrets...... The ending was meh
3 Likes · Like Permalink | Report

Ok I'll be honest, this isn't my type of story, especially the combination of shoujo+romance. It's probably a decent story if you like these kind of cheesy chinese romance. I actually came here because of comedy. Unfortunately it's not so it's misleading. Imo, the comedy genre should be replaced with supernatural, at least that's more relevant. Personally, I prefer stories where the MC is capable and doesn't submit to others or let others control their life, like Stunning Edge which I highly recommend. Then, she would've nope the fk out of... more>> there regardless of what others say or tell her to do. Sadly, this isn't one of those stories, especially when the main theme is arranged marriage. <<less
2 Likes · Like Permalink | Report

Not the worst story I have read, and it's not the best either. It is alright, something short to read to pass the time. ... more>>
Spoiler

The main issue I have with this was the plot hole that was wider than the great canyon. In the beginning of the story, it was clearly written that the brothers didn't need to marry whoever their late father had betrothed them to when they have reached 25. Our MC appeared to cancel their betrothal because she knew she was dying, in fact she only had about a few months left to live. Now if she really didn't care about the ML as she stated (at the beginning of the novel and before she knew of him, she didn't like the ML), then why did she bothered to go seek him out? And not only that, she knew she was dying already, it would've been better for her to be honest from the start before having the ML and herself fall in love. Despite her thinking repeatedly that they could never be together, she still stayed and never said anything, thinking that she would be allowed to go home once the investigation is concluded. Heck the ML have fallen in love with her, she already know that, even if she wanted to deny it. I find her behaviour was hypocritical.

[collapse]
The story was written in a bland slow pace, the plot was very predictable. It was not my cup of tea, but I don't really hate it. <<less
1 Likes · Like Permalink | Report

A bit convoluted, a basic writing style, a somewhat decent plot. I don't regret reading it, but it's also not a must-read. It's a happy ending; don't bother with spoilers, they'll only ruin the story for you. The relationship between the two leads sprung out of nothing, but if you could over-look the beginning, the way they interacted was cute (?).
1 Likes · Like Permalink | Report

First off, as another reviewer said, this is not a Comedy and should have Supernatural. I always enjoy reading happy, romantic fluff with no serious drama. A quick, solid read. The only thing I have to complain about is how I didn't feel totally connected to the characters. Considering the story is mainly told from the female lead's side, I probably shouldn't feel more connected to the male lead... Huge Spoiler
... more>>
Spoiler

I was more glad that the woman he loved didn't die than I was that her shortened life (due to helping others with her power) was extended. Probably needed to see her suffering more. She has a sharp pain, faints and just wakes up some days later. Sure, she's going to die when she's nineteen years old, but it's everyone around her who loves her that we see truly suffering and heartbroken over it.

Not a lovey dovey type of person, but I did find this story cute and enjoyable. It is a short story, so there is nothing to lose by giving this novel a try. A likable male and female MC, especially the female. It rare for me to fully root for the female MC than the male MC.
1 Likes · Like Permalink | Report

Heart warming novel. One of the short novels worthy of reading.
0 Likes · Like Permalink | Report

This is good. It's a bit like "Liu Chai" (Chinese folklore/fairytales). The story start off a bit week but the progress built up is good. It's has a gentle feel, wrap with a bit off mystery, built up abit of revenge and jealousy. Then a bit of supernatural and lovey moments. It's a feel good read.I enjoyed it very much. Tq
0 Likes · Like Permalink | Report

This is that type of story that you either like it or not, like tea. It depends on the weather, how you're feeling and how you view things. When I read this story I already went through the other stories in the series so I had 'expectations'. Story-wise this could be more interesting than the others but how it was executed felt a bit lacking than the other books. Still a good read! I like how smart the male lead is. I've liked him from his short appearances in the other... more>> stories, he's subtle and intelligent. The female lead is a revelation. I cannot say if I like her or not. It's 50-50 for me. The biggest surprise for me was the twist on this story. Of all the things I could think of, from the blurb, that was not one of it so I was pleasantly surprised and that's what made this story for me.",) <<less
0 Likes · Like Permalink | Report

It was kinda hard to read in the beginning because of the unfamiliar style and very dull writing style with repetitive "X said" "X said" "X said" etc. The story itself is... meh... Okay. Good stuff for in between reading and it's not always you find an okay to decent story's novel finished in translation. (Props to the translator & uploader at this point) Enjoyed it a little:
... more>>
Spoiler

The characters have no real depth in my opinion. Kind of troubled me to sympathize with the protagonist since the ending seemed too obvious. There weren't even really heart throbbing moments, since everything seemed to be too predictable and one couldn't help but NOT relate to the characters?

You know when a good story makes the audience cringe/laugh/cry or anything with the protagonist or anyone in the story? Well, it at least didn't click for me.

[collapse]
Still would not call it a waste of time, though. <<less
0 Likes · Like Permalink | Report
Advertisements
Leave a Review (Guidelines)
You must be logged in to rate and post a review. Register an account to get started.