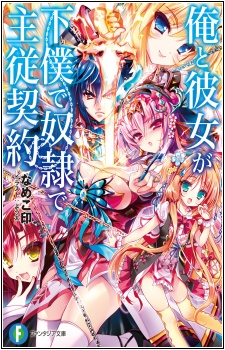 One entry per line
Namekojirushi

One entry per line
Youta

In a world where beasts cause disasters to the lands, there are those called Hexenritter who use their magical power to summon their servants to fight them. There is an academy which trains such people (girls). One of the students there is a girl called Shirley. She’s the heroine of the story and her family was originally one of the four great nobles of her country until its downfall. For that reason she is isolated from other girls. After her many attempts, she manages to summon a servant. But this servant happens to be a boy who has lost his memories. Hayato is his name.

One of Shirley’s aims is to win the tournaments which will give the winner the title, Grantzveissen. It will allow Shirley to regain some of her family’s glory back. In order to participate in the tournament, she needs to get good results in battles arranged by the school.

These are recommendation lists which contains Ore to Kanojo ga Geboku de Dorei de Shuujuu Keiyaku. You should give them a visit if you're looking for similar novels to read. Alternatively, you can also create your own list.
N/A

If you want a novel where MC is summoned as a Servant, something like Familiar, by a pinkish hair big-breasted girl. Then it is for you. I will just explain it right now: The novel is not at all similar to Zero no Tsukaima. ... more>>
Spoiler

This novel has big-breasted main female lead.
She isn't tsundere, but she sure is oppressive-type, but that is quite good and cute, imo.
The story can be said near p*rn level, almost like an older Shinmai Maou.
MC is badass, this might turn into harem, but all girls' seem good and the story is light-hearted at least for now. It sure is.

[collapse]
This review was written at Volume 2nd Chapter 1st. This might be changing in future. <<less
8 Likes · Like Permalink | Report

This LN is fine and it has contents, but I can't read past the second parts of the first volume, because there are too many problems with the characters personalities : First come the MC, suffering from amnesia after being summon and forced into being a contracted invocation. It's the kind of MC that let himself getting beaten up for one of those famous "misunderstanding" while he isn't even at fault.
Spoiler

At first it was okay, but when the heroine goes and decide to torture you without trying to understand it's too much.

[collapse]
He could totally explain himself but doesn't for whatever reason too.
Second is the heroine, having difficulty with her summons, she end invoking the MC, using him for her own benefits and start up first with harassment and takes advantage of his amnesia. And will continue with it even after understanding the situation better.
Finally is the world setting, affecting every character's personalities.
Spoiler

This is a world where women have strength thanks to magic, that only them can manipulate. Meaning that's world where the thinking is "The women protect the male, and good males must have good peerage". Well while this begin fine with this mindset, the more you read it, the more it doesn't work. At some point it's shown that there are notions like "women have to pay on date" and the like, but the heroine continue to torture the MC, which is illogical in this world. Worst, the MC is often compared to a manservant and is manipulated and is touched by the women around him will, he end up stripped against his will, but nobody blames the other party. On our side, those situations wouldn't work with women, so those shouldn't work in the LN world, because they wouldn't be seen on bright light abusing their power on the weak. This logic is used just when the author wants it, and then it's totally forgotten. I hate it.

[collapse]
All those constant flaws, make this LN really difficult to read for me. But I can't deny the fact that the other elements are nice so it doesn't deserve the lowest vote at all. However I can't understand people putting 5 stars for any story where the MC get beaten up without reason.

I honestly don't see the Zero no Tsukaima resemblance other than a black haired guy being summoned by a pink haired girl. The pink haired heroine Sherry is pretty busty, with a mature attitude, and wants to do perverted stuff with Hayate eagerly, but gets easily jealous whenever Hayate the protagonist is being seduced by the other girls or in compromising situations with them. Hayate has a sword shaped crest on his right hand and Sherry has a sword shaped crest above her cleavage, so in order for Hayate to... more>> draw out his legendary fire sword he needs to place his crest on top of Sherry's. Sherry is one of the rare heroines that is not a tsundere, kuudere, dandere, or yandere, instead being a mix of them all. Sherry is more like Senjouhara Hitagi, while Hayate is like Koyomi Araragi in some aspects. The abuse by the female lead is usually only done when she is jealous or when Hayate is being indecisive. Sherry promised Hayate that she will be his s*ave (everything of hers belong to him, body included) and he the master, while Hayate agreed to be her manservant and she the master. They both wear collars as proof of that relationship.... its like a weird way of getting married imo. The best line of Sherry's from volume 2 "Even if I do get pregnant, then it is by my consent" to someone about sleeping with Hayate in the same room. The abuse is like s&m in some ways.... Sherry buys two whips for Hayate and herself to use on each other and collars. I wouldn't call Hayate weak willed per say as in battles he's very brave and proactive especially when trying to protect Sherry from mortal harm. However, he is weak willed towards women in some circumstances, but when he knows that he's being used wrongly then he will snap back like in Volume 2. The amnesia post-summoning plays a slight role in him being weak willed as he lacks many things, but he is not by any means weak in combat. He killed hundreds of mutant chimeras, and 15-20 cyclops sized three headed chimeras, one 7 headed humongous chimera by himself. Overall, the characters are pretty enjoyable for the most part. We actually get a nice confession in volume 1 from Sherry to Hayate and later from him as well. The novel doesn't require much deep thinking, so just enjoy the ride! <<less
3 Likes · Like Permalink | Report

This was good aside from the fact that the MC is your typical gynophobic Harem MC. The girls want him but he just shoves them away like he's going to die from any physical contact with girls.
1 Likes · Like Permalink | Report

Generic male fantasy story. It’s got all the tropes, accidental pervert, harem of girls with varying personalities, and a main heroine who, while not a tsundere, is a total selfish b*tch.
1 Likes · Like Permalink | Report

Too much of the same old cliches. It's got ideas from Zero no Tsukaima, with the author's own twist, and reminds me of Saijaku no Bahamut (i think that's it), Ladies vs Butlers (it's A LOT like that one) and one other. I can't remember the name but the MC is an ordinary guy who got the ability to pull weapons out of people's chests. Anyway back to this novel. For some reason, despite the fact that this world's common sense says he's only an animal, the MC is... more>> treated far better than most of the characters treat each other, though the first girl is simply oppressive. The characters are good if you want the same story you find in any 2D story. No sense of realism nor any "hook" to make the reader want more. I got bored pretty quick since this story didn't have any originality. I would recommend it to someone who's only just started reading light novels but I doubt they'd enjoy it. <<less
0 Likes · Like Permalink | Report
Advertisements
Leave a Review (Guidelines)
You must be logged in to rate and post a review. Register an account to get started.