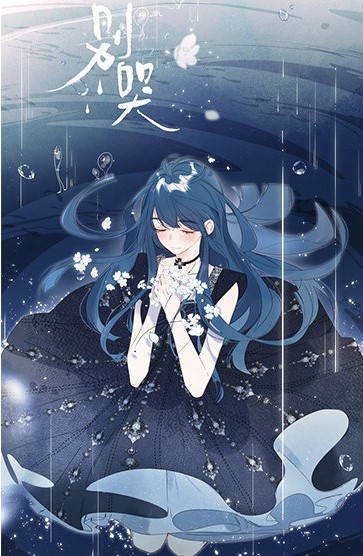 Status in Country of Origin. One entry per line
102 Chapters + 6 Extras
(Completed)

The Tang family had two daughters.

Outsiders have only heard that the eldest daughter, Tang Luoqian, was beautiful and would be engaged to Luo Zhan, the young master of the Luo family, in the future and everyone envied her.

Few people knew that the Tang family has a youngest daughter who was blind, named Tang Ran.

On the day the robot arrived, the whole family was in the front hall with her sister Tang Luoqian, preparing to welcome Luo Zhan, who was visiting for the first time. Tang Ran was alone in the side house, fumbling to see her robot.

Standing in the chaotic darkness, Luo Zhan spoke after a long time.

With a good family background, a calamity-bringing face, and a top mind, Luo Zhan was the dream lover of countless girls in the AI field, but no one could stand next to him.

There was only one reason: Luo Zhan liked beautiful eyes.

Later on, Luo Zhan made a bet with his older brother to imitate a robot for the little blind girl from the Tang family.

—He never thought that he would fall for the little blind girl.

And then it spread that Luo Zhan had been beaten with the family rod by the old man of the Luo family in order to reject his engagement to Tang Luoqian, without uttering a single word.

Everyone was guessing who it was for.

A week later, for the first time, the Tang family threw a birthday banquet for Tang Ran, whose eyes had recovered. After the banquet, the little girl drank too much and hugged the stone pillar in the banquet hall, whispering that she wanted to see Luo Zhan.

The bystanders mocked when they heard, “The young master of the Luo family doesn’t even consider Tang Luoqian. She’s just a half-blind girl who thinks she can see him just because she wants to?”

Before finishing his sentence, Luo Zhan ran in from outside in a wretched state.

The young master of the Luo family, who was usually in high spirits, panicked and fell to his knees, at a loss to kiss the girl’s trembling eyes…

“Will you marry me, Ranran?”

Son, “Mom” Will Back You (Shared Universe)

These are recommendation lists which contains Don’t Cry. You should give them a visit if you're looking for similar novels to read. Alternatively, you can also create your own list.
More Lists >>>

Muah, Muah, Muah... (˶⚈Ɛ⚈˵) (˶⚈Ɛ⚈˵) (˶⚈Ɛ⚈˵) So far, I absolutely loved it. I even went on to find the manhua after reading it. Tang Ran is sooo cute and the way Luo Zhan behaves around her is just 💕. In short, I absolutely loved it. Edit:I just completed the book. This book is really worth it. I loved all their interactions. Although the MC is shown as a little too naive and obedient, it is alright. ... more>>
Spoiler

I was really squealing when the Lan Jian Qing (FL's father) and Luo Zhan (ML) found out about each other. The situation was truly 😂😂.

In the last chapter about Tang Ran's parents, I really cried because of the last sentence Lan Jian Qing said.

It's just that others are meaningless.

Tang Shiyu had also been annoyed, saying that he was like an ink painting, dull and tasteless.

She is the only one in his life that is full of color.

After her, all kinds of colors fell on paper, but there were all black and white."

I hate hate hate the Tang Family for separating them. Their love was so precious and Tang Ran should have had a happy childhood. But because of that old lady's attitude about Tang family's face and reputation, she made Ran Tan's father go abroad, told her mother that she was stillborn and threw her to a orphanage. Ugh (#｀皿´)

6/5 THIS NOVEL IS TRULY SUPERB SOO GOOD! In my opinion, this novel is a hidden gem 😭💖 Plot 5/5; character development 5/5 The plot is not your usual overbearing ceo, face slapping, entertainment etc. This one is different, with thoroughly described background, you will see the beauty of this novel, the heart gripping moment can be felt.... more>> The ML, pls can I have Luo Zhan?! The guy who is really cold but in fact has a really warm heart *squeal* The FL, Tang Ran is so pure and heartwarming BUT she can be really smart too and in fact a compatible match for ML! I shed some tears for this strong girl *cry* So in conclusion, I am very satisfied with novel. I like the novel version more than the manhua adaption, although the manhua art is really really good 💖 but the novel version more more better in describing the plot and character personality. In the novel, I can see more thoughts of ML and fl, their story, the scene, everything felt more make sense. So, I really recommend this novel! You will not regret to waste your time to read this novel 💕✨ <<less
12 Likes · Like Permalink | Report

Hi, translator here! I will definitely come back and add more to this review but here's my thoughts right now. This novel doesn't really have a unique premise or anything but what it sets out to do, I think it does well. Things I liked:
Spoiler

Tang Luoqian kinda falls into that category but she honestly plays such a minor role.

I stumbled upon the manhua adaptation, the art is amazingly beautiful and I was immediately hooked. I then decided to just binge read the novel 'cause I can't wait to know what will happen and ooohhh it's worth it! For someone who loves sweet and lighthearted novels, this totally fits my taste. It's also a plus that it has an in-depth foundation (referring to the past relation of our protagonists). Furthermore, I might as well add that our main characters here are sooo adorable – Tang Ran is givenly precious... more>> while even our supposedly snob and stiff male lead (Lou Zhan) can be cute, too. I love them both! I believe this will be popular, it's just that readers are yet to find this little treasure. <<less
10 Likes · Like Permalink | Report

Extremely cute, it's not very elaborate or philosophical but my heart has bursted into a million shoujo sparkles and pink love bubbles. To be honest, Tang Ran is the main character but the story follows the ml, Lou Zhan, a bit more and he feels like the main character more than Tang Ran. It's not quite instant love for Lou Zhan, but more like good impression at first sight. Tang Ran is your typical beautiful but weak and bullied type of MC, but I do like that she has a... more>> backbone and even tries to maintain proper distance with Lou Zhan when he's named her step-sister's fiancé. Lou Zhan's pretty typical (cool, stoic to outsiders but doting and protective to Tang Ran, genius in his field), but he and Tang Ran work really well together and it's cute to watch this icy-cool guy soften for a delicate flower-type girl. A lot of the background plot is left unrevealed or unfinished once TR and LZ got together though, for example why Tang Ran's parents broke up, what the deal was with Tang Ran's grandmother, etc. Even the original side plot of this one side character having a crush on Tang Ran first is swept under the rug and never dealt with as to not ruin the sweet romance. Rather than answering any of it, you get some small clues and are left to infer the rest by yourself. I'd also argue that TR isn't everyone's cup of tea, she's very passive and most of the story is LZ doing everything for her. She is justified (disabled) in that she can't do much and tries to stand up for herself when possible, however as story character it can get boring. Overall this story reads a lot like a shoujo manga, which could honestly be both good or bad depending on your mood. TR is very passive and LZ basically paves her path to happiness for her, but without a doubt they make a very, very adorable couple. There are cliches and honestly it's not a very original story; but if you're in the mood for an uncomplicated, saccharine romance story that is the literary equivalent to marshmallows then this is a top-notch one that legitimately makes me smile. <<less
7 Likes · Like Permalink | Report

I really wanted to like this, because of the stellar reviews. And in fact, this is a good story if you're a beginner to Chinese novels and hasn't read a hundred books with more or less the same plot. I really tried to finish this, since there are more or less fifteen chapters left in the mtl, but I couldn't take it anymore. For the FL: ... more>>
Spoiler

The FL, Tang Ran, is the same female lead as all of the other stories out there. She basically screams shoujo. Beautiful, frail, and had a heart of gold. Everywhere she goes, flowers and sparkles basically bloom around her. Pros are that she could sometimes stand up to herself, but more often than not, she gets bullied and the people around her (mainly the male lead or his friends) has to defend her honor. She's also a frail beauty, with several descriptions of how obedient, pitiful, and innocent she was. As a main character, I really couldn't relate to her. Because she's so 'kind, ' even the angst fell flat because she doesn't really feel anything deeply, and her heart is like a saint that shines pure white light.

[collapse]
For the ML:
Spoiler

Male lead is constantly described as 'lazy, ' 'careless' and 'handsome.' Typical descriptions are "he lazily glanced at her, his voice was lazy and careless, he was so handsome that it stunned all the girls in the nearby vicinity." An advantage is that he's more real than the MC Tang Ran (less of a cardboard cut out), and has more emotions. He also isn't cold to the FL either, although he denies his feelings several times when people around him confront him about it. Basically telling them arrogantly, "Of course I won't care about her, " etc. Part of his caring feelings for the FL are also because of their past, because he was the reason why the FL became blind. And he also forgot about her for ten years because of his trauma.

[collapse]
Also another plus point to this ML is that he spoils FL. All in all, I recommend this novel for those who like very sweet, very fluffy, and very typical shoujo romance novels. I tried to finish this several times, but maybe because I had read too much novels similar to these, it became too boring to me that I caught myself in a daze more than once while reading. This reads like cotton candy—no depth, sweet at first bite, but too much and you'll get sick of it. Please take note that this is just my opinion though, maybe this novel might be your cup of... cotton candy. <<less
5 Likes · Like Permalink | Report
Advertisements
Leave a Review (Guidelines)
You must be logged in to rate and post a review. Register an account to get started.

Beneath the Dragoneye Moons