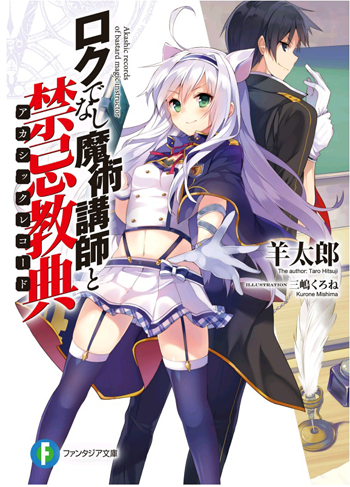 Status in Country of Origin. One entry per line
19 Volumes (Ongoing) + 3 Extra

Sisti attends a magical academy to hone her skills in the magical arts, and hopes to solve the mystery of the enigmatic Sky Castle. After the retirement of her favorite teacher, the replacement, Glen, turns out to be a tardy, lazy, seemingly incompetent bastard of an instructor. How was it that Glen was hand-picked by the best magician in the academy!?

1. v6 continues where anime left off

These are recommendation lists which contains Akashic Records of the Bastard Magical Instructor. You should give them a visit if you're looking for similar novels to read. Alternatively, you can also create your own list.
More Lists >>>

Well, it's really a cliched novel, but it tells us the know-how of magic. Glen is not that STRONG but he uses his witty brain on battles. He may be kinda PATHETIC from the start, but there's a reason for it. Sistina may be a TSUNDERE but you will acknowledge it if you learned how their relationship starts. Lumia the ALWAYS SMILING GENTLE GIRL may be like that on the surface, but when you learned her past, you will know how strong she is with her demeanor. Better not wrote a... more>> review if you only read up to volume 1 chapter 1-2. <<less
34 Likes · Like Permalink | Report

Hmm. This is all right. It may be yet another "oddball in a magic academy" trope story, but it's well written. Nothing here is exactly new or original, the setting, the unmotivated MC with dark past and non-standard powers that's being looked down on, the tsundere female lead with complicated family background - all this has been done before. But this iteration is detailed, competently executed and engaging enough. The story is upbeat, never lets itself be overwhelmed by occasional dark moment and reasonably paced. Translation and editing are good... more>> (except for the prologue, prologue sucks so much it almost turned me off from this story :P). 4 out of 5. Add a star if you're fan of the "Magic Academy" novels. <<less
8 Likes · Like Permalink | Report

Let's keep this simple: Now, with that said... The Good: The BAD: The Different: Altogether, it's worth glancing at, and it starts out pretty good, but it's downhill from there...
6 Likes · Like Permalink | Report

As others have suggested, watch the anime first. Personally episodes 11 & 12 (volume 5) totally ruined the series for me. ... more>>
Spoiler

a female lead/love interest decides to allow herself to be given to a bad guy to save her friends, she doesnt bother to do anything to save them except meekly surrender. This weak, submissive persona was totally different in my opinion to the girl she was up to this point. She was a scaredy cat but had pride, will and intellect. These all are abandoned in this part of the story.

She also treats the MC horribly repeatedly during this time of her betrayal of him, and after as well although he has once again put his own life at risk to save her. She basically went from comical lighthearted tsundere character to full on contemptible thot.

Eventually she realizes how much of a s*upid bit*h shes being and saves MC in the nick of time, but for me, the ship had already sailed and there should be no forgiveness or redemption for her (honestly, I think the author even having her do those things was totally f*cked up).

If she died redeeming herself that would be one thing, but the author just has everything go back to normal after her horrible choices/behavior. I cant stand that myself, but I know that others will be more tolerant. If it wasnt for these events, which are pretty serious to me, I'd give this a 5 star rating.

[collapse]
Two things I really didnt like were the attempted r*pe scene and the near miss/almost netorare. <<less
5 Likes · Like Permalink | Report

I went into this novel hoping for something unique but sadly I was disappointed. It's the usual magic school cliche, the characters are also nothing new the lazy but strong one, the tsundere, and the gentle girl who is always smiling. The villains are also plain, just evil I guess. Also the MC is really pathetic, like seriously, he keeps getting dissed by almost everyone (reminds of natsu from fairy tail, silly all around) Nothing really unique in this novel
4 Likes · Like Permalink | Report

NOTE BEFORE READING 1.I read the manga till the latest chapter
2.i only read this up to the 3 volume This is a different take on the genre of "magic school life" because it's ACTUALLY explain the magic unlike other novel that just straight up said "gathering magic --> Incantations to change the property of magic ---> Fire" this novel actually explain how the magic works and the "unique" magic was also interesting because it opens up many new possibilities in the future Sure the Characters are cliched but atleast they have personalities... more>> and emotion/felling overall I will give it 4.5 /5 still not the best but a good read for the weekend <<less
2 Likes · Like Permalink | Report

Read the manga first then watched the anime and finally read this. This was disappointing. The pacing of the anime was definitely better than this and this is chock full of cliches and tropes. It's annoying and I feel like my brain was melting reading this. Definitely dropped and this is not worth wasting my time on
0 Likes · Like Permalink | Report
Advertisements
Leave a Review (Guidelines)
You must be logged in to rate and post a review. Register an account to get started.