Novel Updates
RegisterLogin
Theme
Search
Your changes has been saved.
Advertisements
12 Hours After 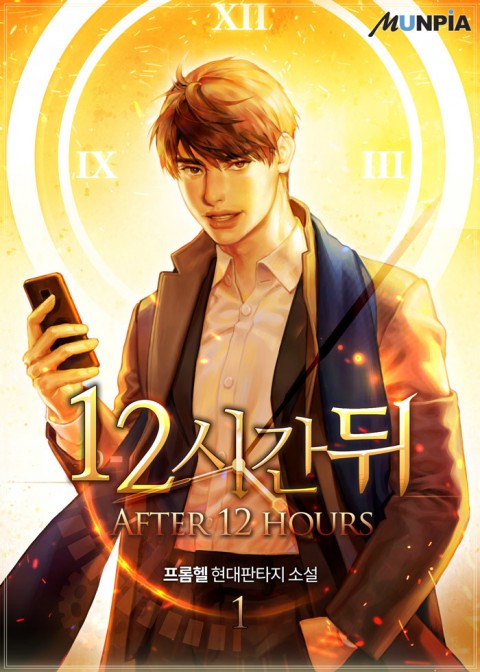 One entry per line
FromHell
프롬헬

Status in Country of Origin. One entry per line
198 Chapters (Completed)
7 Volumes (Completed)

A very ordinary white collar worker, Han Sang Hoon.
One day, he came late to work and there he finds a strange destiny called [12 Hours After]

One entry per line
12시간뒤

These are recommendation lists which contains 12 Hours After. You should give them a visit if you're looking for similar novels to read. Alternatively, you can also create your own list.
More Lists >>>

This is my first review. I read a lot of novels, of basically every genre. Lately I've especially loved the "returned to the past" or "future knowledge" genre, in both fantasy and modern worlds.
This story quickly lost tension towards the middle and end, but had a great start. It lost tension after the MC: ... more>>
Spoiler

got 12 Months after News and also the ability to investigate anything from a fairly omniscient reporter's standpoint.

[collapse]
After that, any plots against him lost tension (as you knew the MC would *never* be caught by surprise), and there's also never any explanation of where the power comes from or why the MC has it. So if you're the type of reader who wants an in-universe explanation (even if it's sketchy/lacking), then this won't be your cup of tea. There's also only a few actual characters that have motives and personality, the rest are copy-and-paste cookie cutter characters that never act organically. The first 1/3 to 1/2 of the novel: 4 of 5, only losing out due to lack of side-characters characterization. But, the later half lost all tension and the MC's powers just kept getting more absurdly omniscient, so the whole novel: 2 of 5. <<less
0 Likes · Like Permalink | Report

I actually enjoyed this novel as it reminds me of novels such as God of Music or Youngest Son of Sunyang where the MC knows the future but in this case its a limited fashion of the title. Don't worry about things getting too out of hand as its quite grounded with decent rationalism and I cannot help cheering for the MC. Looking forward to more of this novel!
3 Likes · Like Permalink | Report

3/5 - C Tier - Competent I’ve read it fully. This story is neither grand nor close to terrible. It is competent in its spot. The writing is average. Dialogues are average. The MC may have gotten lucky initially in obtaining his ‘power’, but he isn’t one with a free path to great heights and little conflicts standing in his way. Conspiracies and obstacles surround him throughout the story and all the way to its end. The author really knows how to use his setting and concept to the fullest and there is... more>> rarely a moment of boredom. If there is a downside to this story, it would be that there are really only 4 characters. Yes, actual characters with personalities and goals of their own, everyone else is a good enough template to fall into the story but nothing ever grander than that. Another downside is that it may leave an aftertaste of being too short and the ending a bit rushed and ‘easy’. Is there a strong plot? Yes. Do some conflicts feel cheesy? Yes. Is there romance? Yes. Harem? No. It serves itself well in the category of novels where watching the growth of the MC in the world is the main selling point. I enjoyed it, maybe you might as well. <<less
2 Likes · Like Permalink | Report

Lame, the MC is naive, impulsive, and too easy to read. The news system is also not that interesting. Almost nothing is interesting in this novel. The MC way of doing thing is so simple and s*upid, if you are a kid maybe you can read this with a glee in your face. But this novel is such a one way plot, almost nothing very interesting in this novel. Plot lame, MC character: naive lame, other side character: nothing interesting, lame. There is one novel that have some similarities with... more>> this, which is "Extraordinary Genius" (same theme, investment from future knowledge etc), that is over the top plot, but more interesting plot, MC and others is much more "human" than this novel. I rate this 3 for 'ok' story, nothing interesting, readable, but boring and s*upid wannabe business story. I dont recommend reading this, except if you are a kid or adult loser who dreams got super cheat and can make money. Also the business perspective is not making sense, this novel is just wannabe rich story. <<less
2 Likes · Like Permalink | Report

Pretty unique. I have never seen a novel based on stock trading and investments. I like it for that even if I find his power to be a bit questionable. It's good read if you like God of Money, and other business management and money making in the modern world.
2 Likes · Like Permalink | Report

Don't waste your time reading this. There was enough of a pull early on where his pre-cog seemed interesting and a couple of points such as his hot landlady and ex-girlfriend were interesting and the romance AT LEAST might have developed in a way that is fruitful to read. In the end however it just spirals out of control. Absolutely a waste of time. Wish fulfillment done wrong. Yes, I'm salty.
1 Likes · Like Permalink | Report

I’ve surprisingly found myself enjoying reading this. This type of novel isn’t usual my cup of tea. However up to the current chapter I’ve read I haven’t lost interest. I thought this novel was going to be the usual rich powerful, Harem sort of thing. But it wasn’t; it’s quite interesting, different and keeps my interest with the slight mysteries surround his 12 hour news.
1 Likes · Like Permalink | Report

This novel has a slightly unique take in regards to buying stocks or making money off future knowledge, veered away from generic re-incarnation and bit coin craze lool It's a nice break from the said generic novels, more along the lines of slice of life? I would recommend it to people who have read and liked novel like God of Money, I found this much better done. As someone before me said, the novel is more realistic compared to other make-money novels.
1 Likes · Like Permalink | Report

For a slice of life- wish fulfillment novel, it's enjoyable. I listen to its audiobook while working and pass the time. The problems come from the characters. Like every Korean we novel, the characters are sociopaths, it actually makes you think all Korean authors are sociopaths. From Dungeon defense, even EER MC has some psychopathic moments. ... more>>
Spoiler

The female lead is a little manipulative witch. She literally approached the MC while knowing she was a CEO, and wanted him to risk his life and fight a powerful business group and revenge for her, over some little smile. But since he logically refused, she went to treating him like air, literally ignoring all the times he helped her. I thought they were friends but the moment something doesn't go her way, she makes him an acquaintance from friend. But right after he does, she literally offers herself to him as a girlfriend. Don't lie to me, how did she refuse all advances from better guys (or girls, not judging) but immediately became his girlfriend right after he did something for her.

The MC himself is no better, if not worse. From the start, he overly complained how he was overworked and lived poorly, like being born with a plastic spoon is the worst thing to happen to a human. As a person from a third world country, 5 of my uncles died while younger than me so I can't relate to the pure torture of sitting in an office for hours, breaking your tailbone

The girl that his parents hooked him up with, was rejected because she was too nice. Not because you guys live a different style, but simply because you thought she wasn't worthy of you. I hope she lives a happier life than you, but I guess she won't.

[collapse]
The MC himself is no better, if not worse. From the start, he overly complained how he was overworked and lived poorly, like being born with a plastic spoon is the worst thing to happen to a human. As a person from a third world country, 5 of my uncles died while younger than me so I can't relate to the pure torture of sitting in an office for hours, breaking your tailbone. (It's repeated, I apologize) Also, he's super hypocritical. He keeps shouting (in his mind) how he isn't like other CEOs but he's just like them. (Unless you're Jeff Bezos, that's a straight up sociopath).
Spoiler

He is super greedy, and always want more money. I wouldn't fault that but, just the idea that what pushes the plot is only his greed, rather than everything else, makes me hate him. Somehow his money is never enough, and you can say it's for the sake of learning new classes and knowing his future that's wrong because they're billions of other things that can make him famous.

[collapse]
I honestly wouldn't have cared if he's greedy, but there was one comment that pissed me off.
Spoiler

When he bought that Bentley, he gave a filmsy excuse that a rich person should spend money, therefore circulating it back into society.

[collapse]
. I guess it never crossed his mind that donating to the poor helpless children and teenagers who literally prostitute themselves to feed their families around the world is important, but a diamond watch is worth it.
Spoiler

Even during the earthquake, he could have made some money of the dead people but refused, and somehow that makes him a saint. Even when he donated the 14 million, there was no sympathy for the future homeless and child beggars due to the catastrophy. It's all for his rankings and ego.

[collapse]
I enjoy listening to numbers being rambled in my ear, and more than boring story. But when it comes to characters, either the weren't well thought out, or they are plain sociopaths. <<less
0 Likes · Like Permalink | Report
Leave a Review (Guidelines)
You must be logged in to rate and post a review. Register an account to get started.