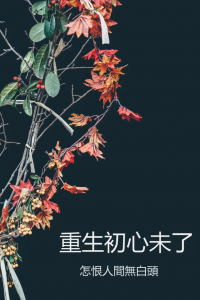 Status in Country of Origin. One entry per line
29 Chapters (Complete)

You are my moon reflection, vestige of my past. I have cherished you and protected you. I hope, that in this life, these desires remain unwavering.

One entry per line
初心未了

These are recommendation lists which contains The Unfulfilled Desire. You should give them a visit if you're looking for similar novels to read. Alternatively, you can also create your own list.
More Lists >>>

Agree with Miaka. This novel is about redemption for the male lead for what he did to the female lead in their previous lives. He is given a 2nd chance to right his wrongs and for the most part, he compensated adequately. I think this is pretty rare, especially in Chinese novels lol. Groveling isn't the same as seeking forgiveness, and he does both in here. ... more>>
Spoiler

In the 1st life, our main lead was an assassin, who fell into obsessive love with our main girl after she saved him once due to a mistaken case of identity. She thought he was her family's savior, because of his weapon which is some type of whip that only her family's savior would own. Unfortunately, he only owns it because he assassinated her savior, which he lied about in order to win her approval. She finds out eventually, of course, and it only adds to her hatred of him after he kidnaps her right before her wedding and pretty much imprisoned her for the rest of her life (cut short because of suicide.) Anyways, if that's two major mistakes he made, it pales in comparison to her believing he murdered her father and family. He didn't, but circumstantial evidence pointed to him as culprit. Cue the misunderstandings and further disgust of him. It doesn't stop him from forcing himself on her daily, though. His assassin training taught him to be obsessive and dogmatic about his targets and she was the goal he aimed for. So he tried to own her, if not her heart, then her body. And he puts a lot of effort into making her happy. As a result, she feels conflicted about him, but hates him more than liking him. Ultimately she commits suicide. He believes it's because she discovered her father's death and thus, had nothing else to live for. His grief was so great, he follows her death shortly after.

In 2nd life, believing the gods are giving him a second chance to correct his mistakes, he vows to stay away from her as much as possible. He wants her to live a joyous and happy life without his interception. Knowing how life would unravel ahead of time, he plots meticulously to prevent any mishaps from stealing her happiness. But fate has other ideas about their meeting. No matter how hard he tries to give her cold shoulders, avoid or not talk to her, his feelings for her gives away his position. She is curious about his strange behaviors and unsure why his eyes always seem to want to say more to her. He saves her many times over the course of their second lives together and eventually, she falls for him, even though there were still some misunderstandings. Not once has he ever revealed his feelings for her or forced himself on her, but his actions spoke volumes about how much he loves her.

It's a happy ending for them both and the plot is tight. Smut is minimal, but done with a lot of details. And while his dark side rears its ugly head once in a while, it never goes so far to ruin things between the couple because he really is trying to learn from his past mistakes.

Looking for a savage possessive ML who received his retribution for not properly cherishing his wifey? (it's karma, baby!) Welp this is the perfect novel for ya! It's a short novel but satisfying for me. I've always wanted to read about FL who were locked then r*ped by ML, only to ended up hurting herself, which later making the ML regretted so much that he died miserably! Kekekeke Noted: ML is the one who reincarnated- second chance to make up to the FL <3 ... more>>
Spoiler

You can't put all the blame on ML though. The FL is too stubborn & 'Mary Sue' that I just laughed at their misunderstanding and hate-love fights.

They didn't have a happy ending in the previous life, yes, ML is not sensible while FL wasn't smart enough. FL thoroughly detest ML, while the ML didn't try good enough to win her heart nor did he succeeded to solve the huge 'blood feud'.

[collapse]
P.S. The chapters are mostly not smutty, but it did describe how thirsty the ML is. <<less
22 Likes · Like Permalink | Report

This novel is so satisfying. Whether it's the emotional built up or smut. But sadly, it's a short story. It would be more satisfying, if it had an extra chapter (a lil glimpse of their future). ... more>>
Spoiler

Interesting part is the ML. He's a yandere ML and we know that from the tag. It's described in the novel how hard he controlled his yandereness😂 towards FL. There's a time when he can't control it and came to kidnapped the FL. And FL seduced him and they papa👌.

In his previous life, he kidnapped the FL and r*ped her using aphrodisiacs. And there's alot of misunderstanding between them. FL misunderstood that he killed her father. And later she suicide.

I thought FL will remember the past life and there will be alot of drama and all but no. There's no heavy drama. There's a lil misunderstanding about love rival but worry not. There's no love rival.

I'm a fan of male yandere and his behaviour in this novel is what that makes me love this novel so much. I mean how he controlled his yandereness is so meng❤.

It's a ML Rebirth Do-Over story. In the first life, the ML & FL had a miserable life and ending filled with constant misunderstandings. As a result, both leads tormented and tortured each other. In the second life, the ML tries to stay away from the FL to prevent the bad ending of the first life. He only wants her to be alive and happy in this life. However, things never go as planned. The ML corrects his former life's mistakes and paves the way for a new life. Conversely, he also... more>> finds that as much as he tries to run away from the FL, the more she is the one to chase him in this life. It's a simple story with a well rounded plot that is a bit vague on all the background details of fights, assassins, and etc. <<less
0 Likes · Like Permalink | Report
Advertisements
Leave a Review (Guidelines)
You must be logged in to rate and post a review. Register an account to get started.