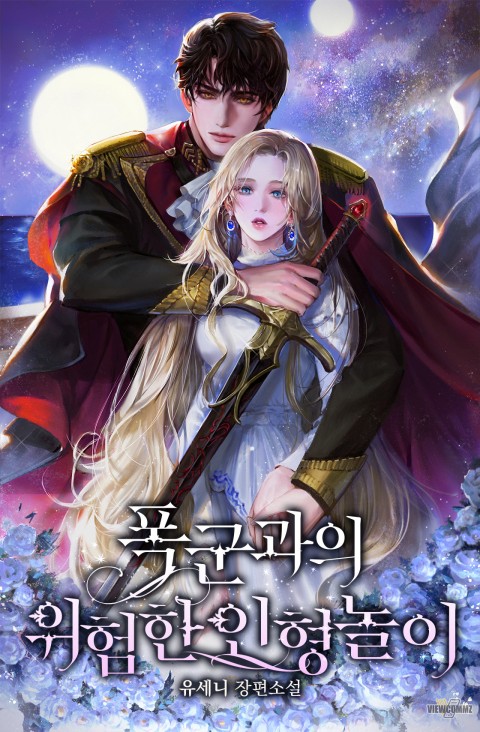 One entry per line
유세니

Status in Country of Origin. One entry per line
155 Chapters (Complete)

I was reincarnated into a bloody novel famous for its bad ending!

I’m even the last “doll” of the tyrant Emperor, who is suffering from insomnia due to his severe trauma?

I must survive his grasp until the original heroine appears a year later to save the tyrant.

But he’s starting to obsess over me, while I’m thinking about running away to safety?

Even the heroine who appeared earlier than expected is suspicious!

‘Then what about my grand plan to leave the tyrant to the heroine and run away?’

Will I be able to survive safely?

The hairs on my whole body stood up. It was as if a hungry black panther was making a threatening sound.

“I must have told you not to let anyone in.”

I saw golden eyes that seemed to be made by melted honey between scattered black hair.

I was suffocated when I met with those fascinating, but young eyes.

‘You’re not gonna kill me if I make eye contact with you, are you?’

He came close to me while I was distracted for a moment.

I was suffocated as soon as I was surprised.

It was because the emperor, who came closer to me in no time, grabbed my waist and lifted me into the air.

The golden eyes that entranced me shook slightly.

A moment passed, and a husky and low voice flowed through his red lips.

That was the name of the original heroine.

And it was the moment that I officially became a tyrant’s doll.

These are recommendation lists which contains The Tyrant’s Last Doll. You should give them a visit if you're looking for similar novels to read. Alternatively, you can also create your own list.
More Lists >>>

Until know, just great. MC cannot talk, so we are blessed with tons of silly comments that does not affect the trama at all lol. TL-sama is also the cutest! In resume: try try try! Edit: Idk why the classification is that bad? Really, I know that the premise of being a doll and stuff is not everyone's taste, but the Tags are there!!!! Makes no sense to give a low rate just because it don't fit you, TL-sama is really doing the best to translate, you know? :/
29 Likes · Like Permalink | Report

Story about a mute s*ave getting ladyboners over a guy who could and would kill her for the slightest thing. Even worrying about him when she's not busy trying not to be killed by him. I don't get it. The power difference is too big and the ML doesn't seem to have any redeeming qualities other than the fact that he hasn't r*ped her yet, which is odd since he thinks of her as a thing rather than a person. Half of this novel is just her sleeping. This is... more>> some horror movie sh*t trying to present itself as romantic. <<less
21 Likes · Like Permalink | Report

pretty good. People actually complained about the dynamic? I wonder do they actually read the novel properly lmao. It was clearly potrayed that the emperor is mentally sick and has huge trauma. Its a slow burn romance 60 chapter and its only 3 month passed. Its weird if they're already lovey dovey and his trauma healed that fast beezus -_- I really hate it when people judge book way too fast
11 Likes · Like Permalink | Report

Previous Review [EV ch 9]: As of chapter 9, EV's translation is a pure joy to read. The story is showing good progress as well, with a gratifying level of character development to boot. The fact that our FL is mute adds a nice dimension as it allows the author to really get in her head and show her quirky personality. Update [LL ch13]: After a long hiatus, Lunar Letters has rebooted the translation and is doing an excellent job of making this series accessible for English readers. Whilst I... more>> did appreciate EV's efforts as well, it is a pity that they weren't able to continue. However, rebooting is the most logical choice for the sake of consistency with any translation. In any case, this series is well-worth the read for anyone looking for a nice twist to the in-a-novel transmigration due to its quirky and comedic take on dark fantasy romance. <<less
11 Likes · Like Permalink | Report

First of all, this is my first time writing a review BEC I REALLY HAVE TO WRITE THIS THIS NOVEL IS A MASTERPIECE. THAT I WISH I COULD REREAD IT AGAIN. THE ML IS NOT TOXIC I SWEAR. I also love the fact that the male mead doesn't see her as Lily, I know it's confusing when he always calls her Liliana but he really doesn't see her as Liliana but as herself. So overall, it's really good, and ppl are nuts for rating this 1 star.
10 Likes · Like Permalink | Report

This is really good. I cannot wait for more development between them and the monologue of the MC is actually great. Can't wait for more chapters !!
4 Likes · Like Permalink | Report

I love it. Let me repeat: I L O V E T H I S N O V E L. 'Till now i've grown more curious and attracted to story by every single line. The more I read the more I like it. One of the major reasons are are the unique plot. Plus, I truely admire translator's work. Really! She (ig) is amazing, first of all, she picked up a novel with a dark, heavy and smut :) cocept, which has a lot of psycho instead of boring dence characters... more>> and also her TLs are super smooth and easy to understand. So thank U a lot. Pls update soon. Fighting. <<less
3 Likes · Like Permalink | Report
Advertisements
Leave a Review (Guidelines)
You must be logged in to rate and post a review. Register an account to get started.