Novel Updates
RegisterLogin
Theme
Search
Your changes has been saved.
Advertisements
The Orc Captive Will Never Be Overthrown by the Elves 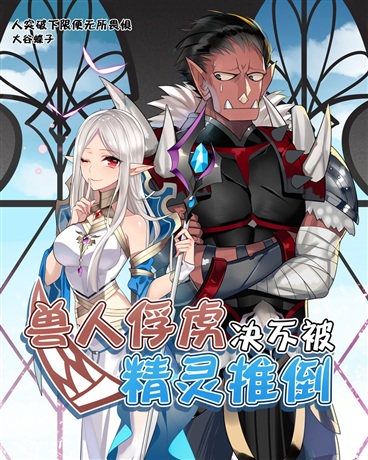 One entry per line
人突破下限便无所畏惧

Status in Country of Origin. One entry per line
984 chapters (completed)

No, No, No, we orcs are also a civilized race, we don’t do things like humiliating Elf women… No, No, it is impossible to get pregnant if you make eye contact with us… I request you elves to not use your restricted books to make assumptions about our Orcs!

One entry per line
I'm not that kind of Orc
老子才不是那样的兽人

These are recommendation lists which contains The Orc Captive Will Never Be Overthrown by the Elves. You should give them a visit if you're looking for similar novels to read. Alternatively, you can also create your own list.
N/A

Before I give my review, I am giving this novel two stars, but I truly have nothing good to say about it. I am refraining from giving it a 1 only because it is clearly not made for me or people with my tastes. I've read the 4 chapters available, and the basics of the story are clear.... more>> Its a novel for masochistic men and sadistic women. Typical proud, decent man humiliated for no good reason by two-faced, generally quite despicable women. A nation of racists threaten our MC with the annihilation of his tribe unless he surrenders his dignity and honor to enroll in their school and attempt to "change their minds about his species". MC is honorable and decent, and though it isn't made clear its sort of implied every female elf is thirsty as hell and all fantasise about being banged by orcs. But if you're into that kind of stuff, the novels premise feels sort of destined to disappoint you. MC is honorable, and as such won't try to r*pe any of them. And even though they all want him to, none of them will ever take the initiative to have s*x with him because of the previously mentioned two-facedness. Translation quality seems quite decent, but, though I do not know whether it will get better, the humor seems very meh and on the nose. The outline was interesting to me at first, but the implementation is such that I see no way for this novel to become interesting to me. Its like a combination of some of the worst things I know: decent man humiliated by whorish women for no reason, racism (not in our sense though, there's no hating on blacks or whites or anything, only orcs), sexism, unreasonable punishment, ens*avement and the idea of honor used as comic relief. <<less
18 Likes · Like Permalink | Report

What do I say? Lets see which boxes it ticks : 1. A decent male lead with a functional brain and who doesn't think with his pp. He also doesn't get horny every time he looks at the general direction of a biological female. Honestly he is the only likeable character in the series. ☑️ 2. A race of Eleves who are dumber than orcs and are somehow op af. They are two faced thots who want to kill off all Orcs because they think that Orcs only exist to r*pe female... more>> elves, while simultaneously fantasizing to get r*ped by orcs. To this end they sent most of their men to die in their wars and now the male to female ratio is doomed to the point that the species is barely avoiding extinction. All in all horrendously retarted and two faced masochistic race of Eleves. ☑️ 3. Humiliating a decent man over and over again, because he is an "Orc". Said humiliation comes from their self created propaganda that Orcs only live to r*pe female elves. But hundreds of years of self indulgence in this propaganda has made the elves into a bunch of hypocritical dumb shitheads. They even create adult comics with the specific theme of orcs raping eleves and get off said comics. Some elves even outright set up traps and try to force the male lead to r*pe them and when it doesn't work, blame him for trying to r*pe them. ☑️ 4. Plot : Yeah Nothing here little Timmy. ☑️ Conclusion : 1. If you are a normal human, switch off your brain and use it as a pass time. 2. If you are a sadistic or masochistic (depending on which side of the coin you adhere to) piece of tr*sh then go ahead and enjoy. 3. Japanese literature is really turning into a deviance engine by the day, Slaanesh be proud. <<less
3 Likes · Like Permalink | Report

I don't want to give it any stars as it is an interesting and unique topic but it's executed so bad that I hate it so I don't want to discourage the artist with a load of you while not actually want to give it a good one either so I'm not going to give it any stars. Ok I have read past Volume One and Truthfully the Story is Not a Bad idea But it's So Reptive and relies heavily on misunderstandings to make the story advance there's an obvious... more>> logic to the plot wish I was having hundreds of years to go prejudiced toward Orcs but it's the point that they just don't get any punishment it's so annoying to see the main character be treated this way and there's nothing he can do about it he's a prisoner if you were to escape he's trying to change the image of oryx so they won't be wiped out by the elves.
Spoiler

I hate they are s*upidly entitled and f****** races on beyond belief I can't stand them if they were wiped out from the story I would not care I don't think I care about is what the plot is going to be.

Only read this if you want to see the MC being humiliated again and again, for no reason than deep racism, with him unable to fight back and be tortured with lighting by pretty much everyone in the novel
1 Likes · Like Permalink | Report
Advertisements
Leave a Review (Guidelines)
You must be logged in to rate and post a review. Register an account to get started.