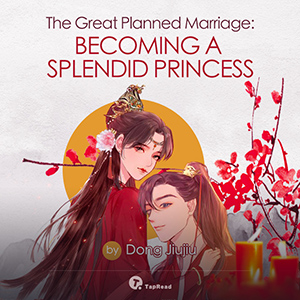 Status in Country of Origin. One entry per line
600 chapters

Shi Qingxue, the sixth lady of the Shi Family, had been in love with a wrong guy, which had led to the destruction of her family. To pay the price, her parents had even lost their lives. Also, she had hurt the man who was deeply in love with her. She could feel her life fading away, but she had so many regrets at this pathetic life. Fortunately, Shi Qingxue got the opportunity to be reborn. Opening up her eyes, she found herself in the back garden of Shi Family. It was the day when her grandmother hosted the birthday banquet. It was exactly where she made all the wrong decisions that ruined her last life. It was where the mistake started. She was reborn, and what would she do next?

One entry per line
步步谋婚：盛娶世子妃

These are recommendation lists which contains The Great Planned Marriage: Becoming A Splendid Princess. You should give them a visit if you're looking for similar novels to read. Alternatively, you can also create your own list.
More Lists >>>

I like the female lead, and I'm very excited to see her great transformation during her life after getting through so many issues!Honestly, I've read so many this kind of "Rebirth"stories, they are all look like very common, but this is a different one!Both its translation and plots are great.I give it a five star! Keep going!
4 Likes · Like Permalink | Report

Not the most horrible as far as stories go, particularly of this reincarnation/time-reverse genre, but very boring considering it's an overused trope and this story does nothing interesting with it. Rather poorly executed in my opinion, and most of the characters are boring and lack depth. The main character, who's praised for being smart and witty, shows none of this in her actions or thinking, and for someone who has been reborn, takes no actions beyond not pushing for marriage like she did in the previous life, which makes her... more>> claim to want revenge laughable. Not saying she needs to be magnificent, all-knowing, or powerful like some of the other stories in this same genre, but at least show some initiative to make fixes and not just wait for the male lead of the story to swoop in and save the day every single time. Most of the time, she gives up thinking too deeply on things that should matter; she trusts too easily for someone who's supposedly betrayed much in the past; and is completely oblivious in an unreasonable or unexplained way. If it had been set out that she wants to live carefree and not get involved with the fight for the throne, then that would be somewhat understandable though it still would not explain her inaction or lack of thought or consideration into her situations/relations/contacts. On the side of romance, she's not only dense, she's downright s*upid, which could be endearing if executed properly, but just is irritating to read.
Spoiler

She spent some 50 years haunting the male lead as a ghost and watched as he moped about her death and remained obsessed about her all those years and for some reason seem to think it would simply go away after he returns to the past like she did and can't get it into her head that he is in love with/is obsessed with her.

[collapse]
I got bored and frustrated halfway, but since I've made it that far, I wanted to finish it, but couldn't. By 3 quarters into the story, I'd gotten so annoyed I'm not even curious about the ending anymore. If you're looking for a better story in this genre and also from a historical CN, I recommend instead The Rebirth of the Malicious Empress of Military Lineage (both CN and translations completed). While it does have a strange ending that seemed rushed and somewhat unsatisfying, the rest of the story is better fleshed out and the characters better written, with a main character that, though bordering can-do-it-all at times shows she can scheme and hold out on her own in most situations and actually uses her knowledge to her advantage. Even her can-do-it-all moments are explained so it doesn't feel too overpowered. <<less
3 Likes · Like Permalink | Report

Initially, I thought this novel would just be a typical rebirth story. Our FL married Mo JunHao, the scumbag prince who pretended he loved her, she was the empress but imprisoned in the cold palace. MJH gets overthrown and beheaded by his cousin, Mo Junyang. Mo Junyang finds the FL but she commits suicide by ingesting poison. She is then reborn and tries to take revenge on everyone who used her la di la di da. What makes this story unique is that the ML, Mo Junyang, is also reborn! This... more>> made their relationship much more interesting because instead of them getting to know each other for the first time, they already have a history. Even better, in the past life they were on opposite sides (politically) and can thus be considered as enemies. I really liked the fact this wasn't the usual ML being interested in the MC because she's "different", and I enjoyed seeing their relationship change.
Spoiler

Best part is ML has always been in love with her though and he believes he caused her to commit suicide in the past life. It's very sweet to watch him try and make her happy in this lifetime to make up for it.

There's a big family secret that doesn't get revealed till much later. Grandmother is a princess, so she's very high and mighty. Her mother is weak in comparison - didn't like her much. Dad is great. I was hopeful of the relationship between MC and her older sister (same mother), but alas, older sister sucks even though you can't help sympathizing with her at times.

The story is set in the olden days. It's one of your basic rebirth stories with revenge, family rivalry, etc. I guess you'd like it if you're into that genre, but I personally do not see anything that stands out too much from this. I suppose that there is a lack of execution in how certain points are being presented.
1 Likes · Like Permalink | Report

My first time reviewing a story and is to be taken with a grain of salt. Everyone is entitled to their own opinion. The story is interesting to those who like imperial palace drama and intrigue. There are a few hidden conspiracies that will be unearthed. But what I can't seem to like is the female lead who despite being someone who returned back to life was still quite naive and for some reason was only smart when she wasn't in a dire situation. After this far, I was wondering if... more>> she just didn't learn her lessons or had too many high expectations after reading something similar where the female lead immediately took action instead of leaving things halfway where she required the male lead's help again and again. <<less
1 Likes · Like Permalink | Report

... honestly, I haven't gone that far in the novel compared to other reviewers but I don't think I can continue reading on. the novel isn't bad it just ended up being more... complicated than I expected. The relationships are too messy for me. tbh everything is complicated and gloomy. there isn't any excitement nor do I feel and 'good' changes after her rebirth. not to mention the author had poorly started the novel IMO cuz after her rebirth we are just thrust into her life without truly being told her position... more>> in the family and the relationship between the rest of her family. The world background is very poor too I'd have thought I'm reading a sequel with ho things seem to be explained. it's way more 'complicated' than I asked for. I can only say that if you were expecting the MC to face-slap and become super badass while engaging in a sweet love with ML as well as capturing hearts of all those around her and involving political play I have yet to see this and I doubt that's its the direction of the novel. simply not my cup of tea but I know there are lots who'd enjoy this kinda plot so do give it a try. <<less
0 Likes · Like Permalink | Report
Advertisements
Leave a Review (Guidelines)
You must be logged in to rate and post a review. Register an account to get started.

The Rising Of A Diamond
Advertisements