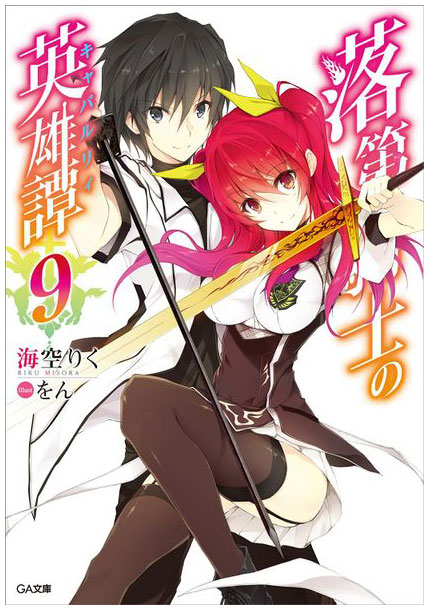 One entry per line
Won
をん

Status in Country of Origin. One entry per line
18 Volumes (Ongoing)

One entry per line
Sol Press

In a time and place where one’s soul can be morphed into a weapon, there are modern-day magicians called Mage-Knights. Although Kurogane Ikki is a student at an institution that trains Mage-Knights, he has no particular talent in magic and is labeled the “Failure Knight” or “Worst One.” Getting way less than average marks in the scorings, he was forced to repeat a year. But with the arrival of a new head of the institution, a new rule was created: knights whose abilities are compatible, as decided by the board, must share rooms and attend practice and training together throughout their school years to bring up their abilities to the max. It is a rule to implement the absolute verdict of ability.

Ikki’s roommate, Stella Vermillion, turns out to be a princess of another foreign country. Stella is a Rank A knight: the type of genius in magic who only appears once a decade. When Ikki walked in on her while she was changing her clothes, it caused a huge misunderstanding, which eventually ended up in a duel between the two of them. The punishment for the losing side is Eternal Submission to the winning side.

Forced to live the same room and practice magic together throughout all their school years, how will Stella and Ikki’s relationship evolve?

These are recommendation lists which contains Rakudai Kishi no Eiyuutan. You should give them a visit if you're looking for similar novels to read. Alternatively, you can also create your own list.
More Lists >>>

5 group(s) hidden due to dead links. Click here to show all releases.

Ah here we go.. The useless MC who was kicked out of his house and disowned.. And a princess female lead. Sounds.. Mix'd and matched right? Well for as mix'd as it sounds the author manages to bring these two together somehow and it doesn't feel off. The action scenes are well written as are the little slice of life scenes. I do recommend this to anyone who would want a romance novel with some action :3
25 Likes · Like Permalink | Report

This kind of novel is the reason I stopped reading Japanese light novels and it's got an anime version too! The MC has no unique personality, he's one of those annoying hypocritical good guys we see in Japanese novels or animes. The female lead is a red haired princess with big boobs (nothing new here too). It also has a brocon loli sister, which adds the element of inchest, which is nothing new either. The so called love (?) relationship between the male and female lead seems nothing more than... more>> fighting partners than lovers and the plot and story line gets worse as the series progresses. <<less
22 Likes · Like Permalink | Report

This LightNovel Is really amazing. I love Action-Romance-Ecchi Stories and Rakudai kishi has the best balance of these three genres that I have ever seen. There are serious And exciting fights and awesome slice of life moments. For the people who like these genres in an anime/Mangs/LightNovel, I would say that Rakudai Kishi is the best option there is.
14 Likes · Like Permalink | Report

Four volumes in and it definitely lives up to standard battle school harem cliches but with one fairly big deviation - the MC is strict one woman man from volume and it doesn't deviate. He and the princess are head over heels for one another and there's barely any beating around the bush from the word go; hell, it even fakes you out a bit with the princess reciting lines right out of tsundere 101 like she wrote the damn book, and then subverts that by having the two confess... more>> to each other. Afterwards she's just a hotblooded possessive girlfriend. MC's past is pretty horrid and him being so damn naive about it can be a bit annoying, so I hope he gets some kind of true catharsis. He almost hits doormat territory but the aforementioned confession with the princess and his loving moments with her saves him from succumbing fully to the dreaded beta Japanese MC doormat disease. <<less
4 Likes · Like Permalink | Report

A cliche harem novel with intense action. MC pick a girl from the very first volume. But despite having a girlfriend, cliche harem situation happen all the way through the series. And farce of him being talentless feel more and more BS as the story go. ... more>>
Spoiler

The MC is bullied because everyone look down on swordmanship... While in the mean time the world strongest reigned the strongest with her sword play. Seriously?? I mean yes she has A rank magic but there are plenty non-student A rank around, but she is the strongest by her sword play while the MC having extraordinary talent in sword is looked down upon. That's BS.

[collapse]
All the cliche aside, I really like how the author build up the tension, the intensity of the battles. I give it 4 stars. <<less
1 Likes · Like Permalink | Report

It is a great novel, with both a manga and an anime adaptation, and I can see why. The setting is interesting, the plot is decent, while I'm not the biggest fan of how certain tropes are used and how some characters are portrayed I honestly can't say this is bad in any way. As of writing this review all of the links to the volumes are down, probably because of the publication/author insisting. It is a shame but I can understand that. It's not a great setback, you can... more>> find translations easily enough if you are desperate. Give it a read if you are interested, personally I think this has elements just about anyone can enjoy. <<less
1 Likes · Like Permalink | Report

I'm not good with words just but I am so disappointed with this series in terms of power scaling for the MC, everything besides that was good. ... more>>
Spoiler

Almost every arc, ikki's powers gets downgraded or weakened.

Second big arc: His new powers from the strongest swordmans was downgraded in the tournament, everybody possed stronger or faster powers then him.

Third big arc: He gets stronger.

Final arc: he's in the most weakened state of the entire series and this is the final arc.

Another thing is the covers of the light novel, almost every cover in the series is Stella but in different positions.

Is no one going to mention the history of blazers and shit.

[collapse]
I messed up, this was supposed to be a 3 star review not a 1 star review. <<less
0 Likes · Like Permalink | Report
Advertisements
Leave a Review (Guidelines)
You must be logged in to rate and post a review. Register an account to get started.

Commander in Another World