Novel Updates
RegisterLogin
Theme
Search
Your changes has been saved.
On the Way Home I Got a Bride and Twin Daughters, Who Were Dragons

Home >
Novel >
On the Way Home I Got a Bride and Twin Daughters, Who Were Dragons 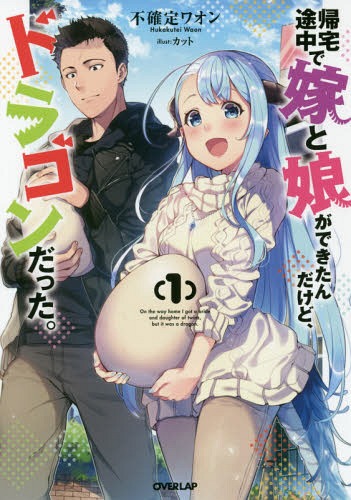 One entry per line
Fukakutei Waon

One entry per line
カット

Thanks to my old man doing his best, despite it being on a two-generation housing loan, I was able to get my very own single-family house! As I went shopping on the evening of the day I moved in on my younger brother’s request, I was asked for help by a lovely blue-haired girl. Told it was a kidnapping, I took out the perpetrator with a lariat, and what appeared were actually two large eggs. As soon as I touched them, they split and two baby girls appeared!

At that moment, the blue-haired girl called out, “You’re the dad!”

These are recommendation lists which contains On the Way Home I Got a Bride and Twin Daughters, Who Were Dragons. You should give them a visit if you're looking for similar novels to read. Alternatively, you can also create your own list.
More Lists >>>

Right... I can deal with a shut in MC who can't talk to girls (he is 17 and not home schooled so I really do wonder why he acts like he does), but the story feels like it was written as a school project or as a hobby by a younger teen. I know some people are fine with reading things like this, but I'm personally not in that group as whats below just makes me cringe a bit and stuff like it is common in this story. ... more>>
Spoiler

With a whoosh, I approached the person within the dissipating cloud of dust.

[collapse]
I do support newer writers, but this is not something that I would read for fun. If you wanna know more read Darkanlan's review as they did a good job pointing out why it's hard to read. <<less
11 Likes · Like Permalink | Report

This novel is really all over the place with the first few chapters. It's different perspectives in different times and none of it really makes any sense. I hope the future chapters are more cohesive, but right now it's like reading the ramblings of a child trying to put a story together and being told it doesn't make sense so he tries to fill in the blanks and gets even more confusing in the process.
8 Likes · Like Permalink | Report

Nothing much to say. Just another harem comedy novel, with potential yandere eyeing the wife position currently held by clingy dragon waifu with zero common sense, while several other chicks hang around making up the typical harem comedy of errors. The indecisive MC who can barely speak his mind without being bulldozed by all the girls around him is basically just icing on the cake at this point. A cake that we've all probably seen a hundred times over. The twin babies are new though, and reading about how they take care... more>> of the babies, and dragon physiology in this book is mildly interesting, but not enough for me to care about a stuttering MC who keeps blushing and can't give a straight yes or no. Side note: the chapters are horrifically short. We're 32 chapters in, and we're maybe.... 10% (?) into the first arc. We've got the introduction and the first night together with the babies, andddd that's about it. Lot's of stuttering, indecisive cowardly thoughts, talk about how dragons in this world need LOVE to be born, etc et al. <<less
5 Likes · Like Permalink | Report

First of all, forgive my writing, I am not English speaker. The novel is fluid, but it is written in a disorderly way, the MC acts as what he is, a guy of 17 years old. Although, I am bothered with he, by the indecision with the girls around (as in any regular R15) ; however, the dead with the girl protagonist make up for the above mentioned, there she gains severe points again. So far, it is a refreshing novel to read, if the novel continues focusing on the building... more>> of the family. I think it will be a good novel, but I worry about the harem tag,
Spoiler

at the moment, the other girls around have been irrelevant, I hope it continues like this.

Novel where the MC is a useless who stays looking at the problems without doing anything and then runs to solve them with nice words, (since he is useless), and he think that the best option is for all people to be unhappy because the world is in that form and can not do anything.
2 Likes · Like Permalink | Report

TBH I'm a huge fan of child care story. I would rather read something moe from the baby rather than moe from all heroin in generic harem story. 1st time I encounter this novel, I though, this is one of those novel, but it turn out no.. Instead making of the story "how the teenage boy became daddy, and struggle with his zero sense wife" the author turn this story into generic romcom - harem story. The concept of the baby here, barely touch by the author. Honestly, literally the author can made... more>> a story about teenager MC and clueless wife, struggle with their new life (thanks to the baby), they got guide by MC family and friend, and touch more about the mystery of dragon kin. I really disappointed to this novel, because its not like I expected. But if you really a huge fans of generic romcom harem story, this is for you. <<less
1 Likes · Like Permalink | Report

I do not have much to say about this novel, in general it is good, the protagonist is what it seems (a rebellious average teenager with average intelligence) and as far as I remember is not hetare (with only this is 5 stars). Regarding the harem, in the 50 chapters that I have read there is still nothing romantic beyond what is being developed between the two (MC - Dragon), so it implies that the harem will not appear from nowhere and without development. Basically I consider the novel as "good", in... more>> the sense that it has almost nothing that "personally" makes me stop reading it... well, only one thing, . Small Spoiler
Spoiler

The family of the MC is annoying.

Close to chapter 50, the male protagonist's father and brother basically lecture him after a drama with the mother of the dragon girl (in which she almost kills who is supposed to be respectively his first son/older brother three times) and reproach him for striving to be a good father (!?, that's what I understood), in spite of not being the moment for said situation, since this is moments after the drama with the mother dragon and whose drama left her daughter in an emotionally wounded state and the MC with fractures.

So far, as of ch 5, not much has happened. The chapters are rather short, but the translation seems a-okay so far, and the premise is nice. I'd say it's one of those you put on your to-read and wait a month or two for a healthy buffer to catch up with.
0 Likes · Like Permalink | Report
Leave a Review (Guidelines)
You must be logged in to rate and post a review. Register an account to get started.