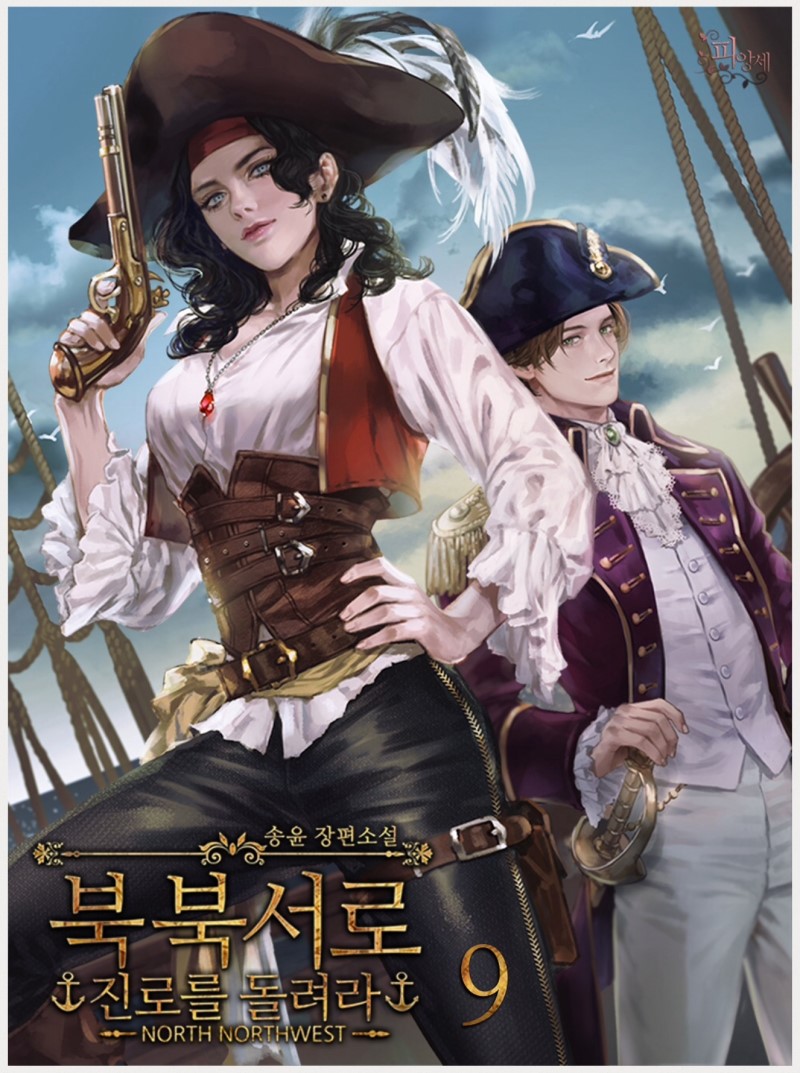 Status in Country of Origin. One entry per line
9 Volumes + 5 side stories (Completed)/
209 Chapters (Completed)

‘Lil Schweiz’, a famous pirate in the southern seas.

While on a smooth voyage, shocking news fell upon her.

“The Admiral is coming.”

Despite the hot weather, chills ran down her spine. Lil took her eyes off her hands and looked up at Alain, the boatswain.

Not that she didn’t hear him, but she wanted to check again.

“The Admiral of the Peninsula! That madman! Admiral Retiro!”

That infamous admiral, known for skinning the heads of pirates he captured and throwing their limbs as food for the cannibal fish, the one with an eccentric and bizarre reputation will come to the South.

“It will be for the best to not cross his path. We should get out of here before he arrives!”

But there’s one thing that Lil doesn’t know…

[I, Lil, are notifying you, Ed, that you’ve been punished respectfully according to the Sesbron etiquette.]

“I’m glad I have a role in this interesting play.”

He briefly looked up at the sunlight passing through the huge veil. The sky above his head soon became covered in several ivory lights.

A marine romance fantasy between a pirate captain and the admiral!

‘Forbidden romance on the high seas!

It was all smooth sailing for Lil Schweiz, a famous pirate captain, until some shocking news almost threw her overboard. The notorious Admiral Retiro, known for scalping and feeding his pirate captives to flesh-eating fish, is on his way… And he’s coming for one thing only.’

Your Eternal Lies (2)
The Emperor and the Female Knight (1)

These are recommendation lists which contains North x Northwest. You should give them a visit if you're looking for similar novels to read. Alternatively, you can also create your own list.
More Lists >>>

Ngl, this story deserves to be read. Got hooked immediately and binged! I have also read the webtoon and the novel version has more details that are important to the story. It's also surprising to read these small details, they helped me understand the characters and dynamics of their pirate life more, especially those that were quite vague or only shallowly mentioned in the manhwa. There were also explanations in the novel that gave more sense to specific story events. I also noticed that while the webtoon has more comedic relief in... more>> it, the novel has a more angsty tone at times, although there are very hilarious parts as well which I enjoyed a lot... For the ML and FL, I'm really liking the FL and ML dynamic so far and it's the enemies to lovers trope I'm into. Looking forward to see how the rest of the volumes are translated! <<less
10 Likes · Like Permalink | Report

Its pretty good. The author really captures the feel of an adventurous pirate story. There are some small plot holes, but nothing too bad. There is hardly a second to focus on it as there is always one disaster after another that they have to work their way out of. I'm enjoying it immensely. Slight spoiler below concerning the romance. ... more>>
Spoiler

What's really unique is the MC is already in a loving relationship (including sleeping together) at the beginning of the story. Its odd to find that in a novel. She is with a great guy that seems to support and love her, though there might have been some subtle hints that she does not love him as much as he loves her (though she definitely still care for him a lot).

I don't know how the author plans to move forward with the romance. I will be very upset if they end up killing off the current significant other. He is in every way equal to or better then the Admiral. I am hoping the author does not take an easy way out like that.

The author has done a good research on pirates and ships. Whenever action is happening on the ship, relevant parts of the ship are mentioned, things like navigation, battle tactics, guns, crew positions and pirate customs are covered too. The magic in this novel so far seems very minimal, it's more of a guns and swords story (and swords are at a point where they are going out of fashion). The MC may seem like a typical tomboy, but she is a pretty complex character in my opinion. The two love interests... more>> are distinct and quite interesting in their own ways. The romance in this novel is not a straightforward venture. These three characters feel very differently about their relationships with each other. <<less
5 Likes · Like Permalink | Report
Advertisements
Leave a Review (Guidelines)
You must be logged in to rate and post a review. Register an account to get started.