Novel Updates
RegisterLogin
Theme
Search
Your changes has been saved.
Advertisements
The Emperor and the Female Knight

Home >
Novel >
The Emperor and the Female Knight 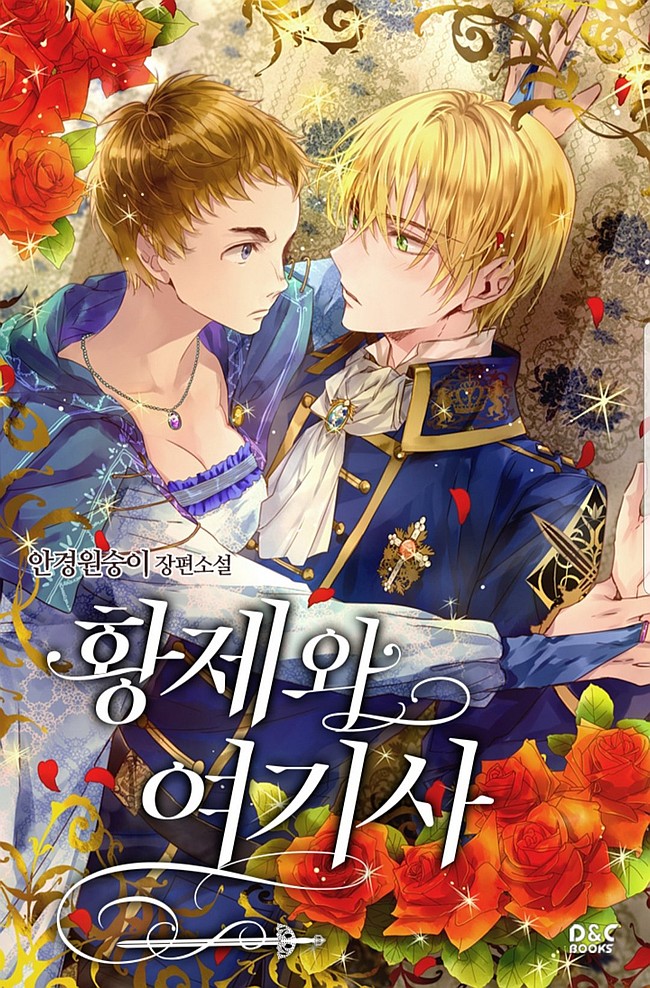 Status in Country of Origin. One entry per line
135 Chapters (Completed)

One entry per line
D&C Media

“You are looking lovelier by the day.”

“Is there anywhere that you feel is uncomfortable?”

The emperor of the continent, possessing both ability and looks, has fallen in love with a female knight tougher than any man! But before their comradeship turned into love…a story of a particularly new style of a ‘female knight romance’, divided into both solemnness and comedic relief by the golden ratio!

The female knight Poliana stood on a disadvantaged battlefield, defeated by the Acrean army. She had desperately worked to survive in a patriarchal society, but she was now going to die.

However, the young Acrean king, Lucius the First, looked at her desperate struggle and threw out a suggestion.

“I have a dream. It is to continue to invade to the south and become the first emperor of this content. How is it. To follow me to set foot on the edge of this continent?”

Pauliana swore a lifetime of allegiance to the king who had recognized her. As a knight. But at the final stage of his campaign, Lucius the First realizes that he’s in love.

The him who wants her to be his ‘woman’ and the her who does her utmost to serve her ’emperor.’

On the battlefield of love, the emperor is the weaker party! The ideal chivalric romance vs. The peculiar palace romance, what will happen when the two collide?

These are recommendation lists which contains The Emperor and the Female Knight. You should give them a visit if you're looking for similar novels to read. Alternatively, you can also create your own list.
More Lists >>>

I read the manhua and immediately fell in love. I was expecting more corniness and kind of the psuedo-knightess genre, where the female knight is supposed to be OP but ends up getting rescued all the time. Not here!! This novel took a refreshing take to sexism and struggles that women face (i.e., does not gloss over them and seriously questions a bunch of BS that the MC has to face), and the main character is not cliche at all. She is really lovable, and works soooo hard for everything,... more>> but has a great head on her shoulders. The romance is VERY slow-burn, but sooo great. Only problem is that Webnovel, which is where this is located after being licensed, locks the chapters after 12 or 13, so you have to work for those free fast passes. The manhua left out a lot of the darker parts, thought, so mega content warning on that.
Spoiler

Such as, she gets "sodomized" in the beginning of the novel, but apparently a lot of the soldiers do, as well. But it didn't feel romanticized at all, which is GREAT. A lot of these romance novels have a thing where the ML has to r*pe the FL or something to make it romantic which like... no thank you.... lol....

First of all, I'd like to say that I absolutely LOVE the manwha, it is one of my absolute favorites and its thanks to it that I've put my hands on the novel; the original source. I was far too impatient and excited to know what happens next in the story, so I started to read at around chapter 180~ ish, where the season2 of the manwha ended. So far, things went smoothly... but then it went downhill, fast. Now, I was well aware before of the various differences between the... more>> manwha and the novel; mainly the physical appearances of both our FL and ML (In the novel, Pauliana is a blue-eyed brunette, Lucius is green-eyed blonde. While in the manwha, she is a green-eyed redhead, and he's a blue-eyed platinium blonde) Not a big deal tbh, but there's a catch; their personalities are also rather different. Spoilers ahead, please read with caution:
Spoiler

When Pauliana first meets Lucius in the manwha, she begs to be killed honorably; and he adheres to her wishes pretty fast. However, the soldiers don't exactly respect or obey to his order immediately and plan to r*pe her, which of course, results in pauliana savagely fighting all of the men coming her way. In the novel however, Lucius is extremely superstitious and believes killing a virgin woman will curse/haunt his men and himself, so he orders for one handsome man to bed her before having her get killed. Basically r*pe. This left a sour taste in my mouth, but I let it slide. Further down the road, there are many other differences between the manwha and the novel, but I've only ever skipped to where the manwha ended, so I'm not exactly sure what they are. Anyway... The real problems arise after Lucius falls in love with her. Desperately.

Pauliana doesn't love him, her only feelings towards Lucius are those of respect and loyalty; nothing that could exceed what normal knights feel towards their emperor. Her reasoning is honorable, but the author somehow makes Pauliana's character inconcistent. At the age of 33 she becomes desperate for a husband, someone who could be by her side. The sudden loneliness is a surprise since not that long ago, she had rejected Donau, a man who loved her just as much as Lucius, for reasons. Of course she did not feel the same way, and I respected that. But later, something so mindblowingly annoying happens. A new character named Frau Sneke makes his appearance, and he's a gold digger who clearly doesnt love her. He makes his intentions known to Pauliana (that he wants to marry her for her money and title) and, while she was angry at first, she later on felt moved and apreciated his honesty. She seriously considered marrying a gold-digger because she was that lonely. Alright.
Unfortunately, Frau wasnt as honest as she thought and it turns out that he had a secret bastard child somewhere. a son he concieved with a maid from his household (and the main reason why he got disowned). Frau had planned to hide his existence from Pauliana, so his son could inherit her name and title, as well as her fortune. Pauliana finds out, and in her absolute fury; she forces Frau to cut off his own pen*s in front of his son.
This is where things started to look extremely shady for me. Frau, while having lied about having a son, had made his intentions clear from the beginning- that he was after her money. The fact that he wanted her money for his son's well being isn't that different. The reaction from Pauliana and, hell, everyone else was so extreme that they told her she was too soft on him, and should have done worse than force him to cut off his own dick??? What.
The author seems to strongly believe so as well, and they wrote it as an act of grace from pauliana's part. Lucius, who had witnessed the whole thing, told her she was too soft on him too. The man's only crime was to have lied about being child-less. Was it really worth traumatizing his child?

A few chapters later, Pauliana and Lucius get drunk and have sex. (c264) Its at this point that the story becomes absolute nonesense for me. Pauliana gets pregnant from that one-night stand and, as soon as she discovers that she is carrying his child, she demands for a vacation and runs off to give birth far away from Lucius. She doesnt even tell him that she isnt barren, like he had thought. Once she gives birth to his son, Pauliana's thoughts go from hoping the child dies, to hiding his existence from Lucius completely. (A selfish and hypocritical thought because Frau had his d*ck cut off for that exact reason?! What the hell pauliana! What the absolute F!)
But Lucius ends up finding out anyway after an impromptu visit to her land. He is of course overjoyed by the news and confesses his love immediately! Which angers pauliana.

Her angry reaction was a mess. Because marrying the emperor would result in her losing her name and knight status, she makes it a big deal to practically step on his heart even further. She tells him she doesnt love him or the son she bore for him. The confession hurt her more than anything else in her life??? And she wouldve been happier if he had just married her out of obligation and not love? Author. You make pauliana fall for a gold digger who doesnt even love her, but when Lucius, the man she practically WORSHIPS tells her that he loves her, she throws a fit?

Maybe I just cannot understand her reasoning. But everything after that one night stand was absolute selfishness on Pauliana's part. Her hating her own son was the cherry on top. She even suggests marrying the emperor so their son will be a legitimate heir; then divorce him?? Lucius was thoroughly broken by his love for Pauliana in 200, agonizing chapters, but she further breaks his soul by acting like a selfish brat. Where has her noble knightly personality gone? Everything Lucius has done was selfless. He had been ready to give up on his feelings for her happiness, he had redeemed himself many times, but she keeps acting like a cold-hearted witch, something I KNOW she isnt.

After that point, Lucius tries his best to woo her. But Pauliana's character is already broken for me.

[collapse]
Another thing I hate about the novel is the writing style. It is far too slow and agonizing to read. Something happens, but the author keeps adding descriptions and mentionning things we already know. Yes, we know how loyal Pauliana is. We know what her duty is. We know how she would kill herself for her emperor. We know her past. we know how she felt when X thing happened- we know we know we know. We have to go through entire chapters of descriptions/things we are already aware of just to read what happens next. This is extremely tiring to read and I find myself skipping chapters for that reason alone. The saving grace for the story is Aino. I love that jerk. He's a himbo and an as*hole but he's a funny one. He's the most honest character I've seen and I honestly was WAY MORE invested in his love story with Cekel than the main pairing. He should get his own spinoff, that guy is hilarious. Had it not been for him; I would've rage quit reading. Dont get me wrong. I love this story. I still love Pauliana; I love lucius. I love everyone. I want to seperate the manwha from the original work and I sincerely hope that season 3 wont have the mess this novel contains. Pauliana is everything I wanted in a heroine, and the fact that she isnt conventionally attractive is a bonus. Most heroines are gorgeous women, but we have this manly, strong gal as our FL- a breath of fresh air getting ruinned for all the wrong reasons. Finally a story where someone loves the other for more than their appearances- But Pauliana has never looked more ugly to me after her
Spoiler

becoming a mother and hating her child for selfish reasons.

A Chance To Become An Adonis