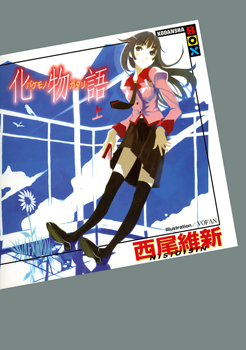 One entry per line
Vofan

Status in Country of Origin. One entry per line
27 Volumes (Ongoing)

One entry per line
Vertical

The Monogatari series centers on Koyomi Araragi, a third year high school student who is almost human again after briefly becoming a vampire. One day, a classmate named Hitagi Senjōgahara, who infamously never talks to anyone, falls down the stairs into Koyomi’s arms.

He discovers that Hitagi weighs next to nothing, in defiance of physics. Despite being threatened by her, Koyomi offers his help, and introduces her to Meme Oshino, a middle-aged homeless man who helped him stop being a vampire.

Some volumes are split into multiple stories which are identified by the ‘s1,2,3…’ in the releases.

These are recommendation lists which contains Monogatari Series. You should give them a visit if you're looking for similar novels to read. Alternatively, you can also create your own list.
More Lists >>>

This series creates great anime.. what else can I say other then this novel has Waifus, a Chosen Waifu, and supernatural fights.. (The Chosen Waifu is territorial btw..). Araragi our poor MC just happens to stick his head into other peoples supernatural problems, and helps them try and solve it... and the rest is for you to read.. :) I recommend both the anime series and the novel series as both are good in their own rights. :D
25 Likes · Like Permalink | Report

REALLY REALLY GOOD READ! Except, I am not too sure where it is now. But back then, at baka-tsuki, This novel translation chronology is confusing. Imagine having to see latest translation at chapter 10 book 5, then next will be chapter 5 book 7. IT WAS REALLY INTERESTING! Also. You have to be specially knowledgeable about some lores about Japanese myths. It helps. Like XXXholic manga. Which will leave you clue less unless you know which myth it was based from.
1 Likes · Like Permalink | Report
Advertisements
Leave a Review (Guidelines)
You must be logged in to rate and post a review. Register an account to get started.

Myth Of The World's Trees

Collecting Numbers on Another World to...
Advertisements