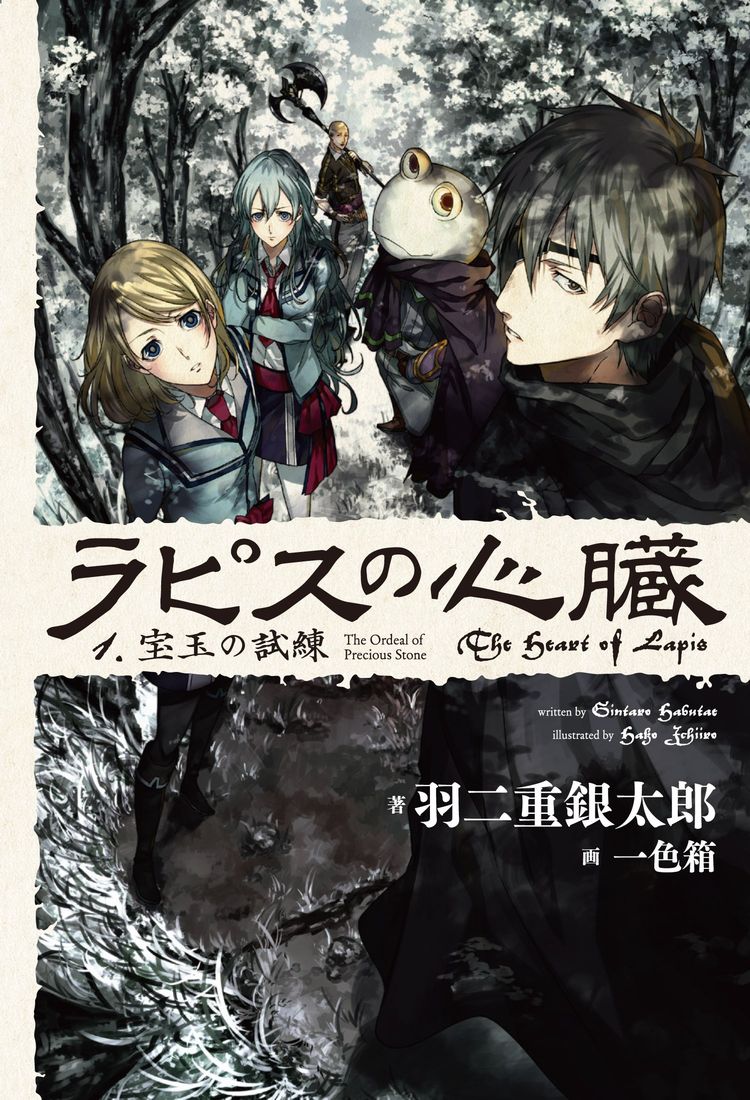 One entry per line
一色箱

Swarming with ferocious creatures called Rabidaemons, an ashen forest covers the world. During a chance encounter, a skilled assassin adopts an orphan named Shuou, seeing promise in his innately remarkable kinetic vision. Twelve years later, having acquired an array of knowledge and skills, Shuou sets out on a journey to experience the world. Overflowing with talent, he ascends to greater heights through various events and encounters. A fantasy telling the story of skyrocketing success begins here.

One entry per line
Heart of Lapis
ラピスの心臓

These are recommendation lists which contains Lapis no Shinzou. You should give them a visit if you're looking for similar novels to read. Alternatively, you can also create your own list.
More Lists >>>

so as usual, my review can be called as just ranting stuff, but if you're a new reader and can accept the rants I said please go ahead and read this but if you can't accept it, might as well forget it and read another novel well ch 1 was no good for me, was a disappointment sigh what was that, the series of events looked really forced ... more>>
Spoiler

the lack of heavy reason for his departure (leaving his master and making her cry).... but I guess him leaving seclusion on his own will without any heavy reason is better than being forced to, whether it's due to some antagonists or some mishaps)

[collapse]
the author really could've done better sigh, all of that just to make the plot progress ch 2 pretty much ok I guess
Spoiler

well it's another one of those trope

some higher ups saw the MCs ability cause of some debacle thus having an interest in him, whether it's due to his ability or his personality

heh wouldn't be surprised if he's gonna be stuck with the army, with his freedom to explore gone with the wind

with that pairing and stuff

he's already regretting things, what a dumbass accepting jobs without thinking it through

well if he doesn't like crowds or some interactions with others, he shouldn't have left his master then, dumbass.... he really has the tendency to avoid paths that has heavy traffic (where would you explore new things then, if you don't like places like that? the slums?... really an idiot)

getting into a fight without resolving things just begs for trouble (could've beaten them up after the break up without anyone knowing then asking them to clam their mouths), the whole scene from getting angry towards the end was unnecessarily dramatized (heh he could've dodge being wet by that drink but he didn't, it's just an attempt to add some weight)

his master is an assassin

she could've taught him on how to be calm and control his emotions, on always having a concrete plan and be ready at all times

well the only problem with that, is that in some situations it can be downside.. cause by making it look so bleak, you're gonna wonder how the hell others passed that test

he can hunt for food if I'm not wrong, so their food problem should be solvable

they talked about the test, ladened with contradictions

Well, this is my first review, so bear with me. The story's just starting out, so it's hard to write anything definitive, but I feel as if it has potential so I'm doing this. Also, there aren't any reviews yet, so I might as well put down my first impressions. The reason why I'm giving it a 3 is pretty obvious, I think. Thus far, the writing is pretty good. No unnecessary descriptions and I don't get the feeling that the author is trying too hard like in a lot of novels... more>> with an overpowered protagonist. The story goes that the MC is a poor, street urchin that ends up getting picked up by a strong woman. World building is decent so far. I'm honestly just glad that it isn't another reincarnation story, so that's probably what drew me in the most... Though, within the first chapter, we've already encountered a well-overused trope. But, I'll blame it on the lack of a creative way to showcase the MC's strength early on. As for the characters, there's only the MC and his master. But from the looks of it, she isn't going to be a relevant character. She just exists as a reason for the MC's strength from what I can tell. But that's whatever. At least his power is explained; he was trained hard and worked for it. The MC, Shou, he's pretty blasé and probably naive. But it's just the beginning, so I can't say that I like or dislike him. So far it feels like the story is happening around him rather than him acting in the story. If anyone read the Great Gatsby, they'd probably understood what I meant. Even though it's from his perspective... I don't feel as if he's much of a character. This can either get better or worse. That's about all I have to say for now. I think that this story has an awesome possibility to have well-constructed dark undertones (the prologue gave that feeling) or be a flat out dark story. Everything seems to be cast in a dreary, dull, gray overcast. That's the feeling that I get from the writing. It's interesting. Looking forward to reading more. <<less
3 Likes · Like Permalink | Report

The only other review of this novel by 'Tripping' was very unreasonable in my opinion, so I am writing my own review. The world building seems fairly decent, though we are only at Chapter 10 as of the time of this review. This is another reason I disliked the other review. He's given it 3 stars based on only a single chapter. There are so many crappy novels that have a rating of more than 3, so giving this novel a 3 is pretty unfair. It seems like a pretty decent... more>> novel so far. The characters are fine so far, nothing particularly dislikable about any of them. The power system is interesting. Some people can use a magical power, and these people are nobles. Commoners can't use this power. Some extremely strong people are able to inherit extremely powerful crystals from their family and live for hundreds of years. Honestly, the power system feels pretty broad, but since we are only at Chapter 10, I haven't been able to find out about it in depth. Looking forward to more chapters. Read through the chapters and see how you like it. <<less
2 Likes · Like Permalink | Report

It's a really, really good read. What more can I say. Pacing is great, story is captivating, translations are timely and very well done, I'm just enjoying myself two times a week rn.
1 Likes · Like Permalink | Report
Advertisements
Leave a Review (Guidelines)
You must be logged in to rate and post a review. Register an account to get started.

Instead Of Aiming To Be A...

The Revenge Story Of The Holder...
Advertisements