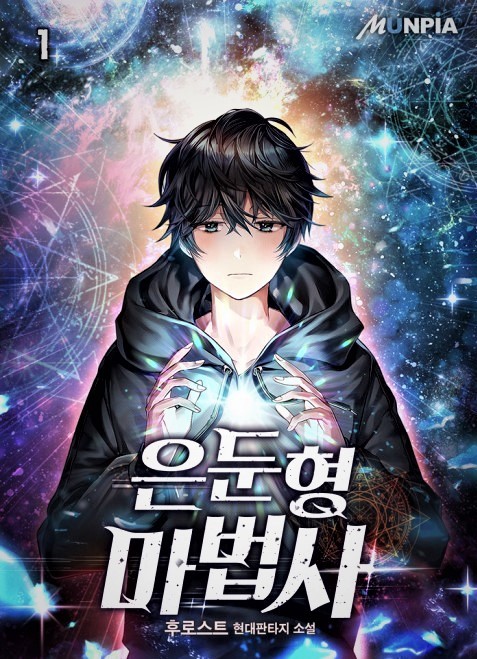 One entry per line
Frost

Status in Country of Origin. One entry per line
350 Chapters (Completed)

One day, a door to another dimension opened all over the world.

At the same time as the channel opens, different races appear on Earth, and mankind awakens its magical talent.

But…? Yoon Min-joon, was able to use magic long before the channel opened.

The forced escape of a reclusive loner who was once the only wizard on Earth.

“It’s dangerous outside the house.”

These are recommendation lists which contains Hermit Wizard. You should give them a visit if you're looking for similar novels to read. Alternatively, you can also create your own list.
More Lists >>>

An interesting story, although a bit dark and morbid at times. The author has a sort of vague writing style that gives many details yet leaves a lot of things for the reader to pick up themselves.
The MC is also somewhat strange. As the description implies, he's fairly cautious and somewhat passive. He reacts to threats, but he doesn't have much motivation of his own beyond his own well-being. He's also in a very gray area in terms of morality. See that torture tag? Yeah, it's not just the... more>> antagonists doing that. The story sees through his development as threats to his safety intensify and recede. Old review (c14) :
Spoiler

Hmm, well, I haven't read very much of this novel yet. The premise is fairly interesting, so I'll probably update this after I've read more than 20 chapters. But before that, I want to say that the review written right before this one has a bit of misinformation. The giant that MC kills in the first 10 chapters was looking for a wizard interpreter as it couldn't speak the language, but it also killed a bunch of people because the police sirens were annoying to it and was going to continue, so I think MC's actions are justifiable. I admit its death was overly gruesome, though.

Uwahhhh, in chapter 6 or 7, I dont know, but MC kill the Giant Who He Think Gonna Rampage, The Giant just Need a Wizard to became Interpreter for the Giant. And He kill the Giant. Just because he dont want to out of barier, its s*upid, coward NEET who have a power.. Ifbhe Come Out and meet the Giant maybe they can talk, but he summon titty monster to kill the Giant. MC is Coward,
0 Likes · Like Permalink | Report

I haven't really done any reviews before, but here's to my first! The pacing of the story is a bit confusing to catch up with, and as AddictiveReader stated, it's a bit overwhelming with the overflow of information. The world-building is quite interesting and I believe the story has a lot of potential. The translation is really well done and the story doesn't seem like the usual ones. The system of Channels & Seeds while involving dimensions is really interesting and I'm looking forward to seeing how this goes. I think this... more>> would be a great story once the author manages to control how to give out all the information. Its an interesting premise, so I have a lot of hope for this one. I'll probably edit this review once there are sufficient chapters to rate it. As of now, it seems like a good read for people that enjoy a lot of world-building. <<less
1 Likes · Like Permalink | Report

It's a bit confusing at first with the information you're presented since there are so much in the beginning chapters (Don't know how the future chapters will present). So far it seems interesting with all the monsters introduced and situations of the world.
1 Likes · Like Permalink | Report

This story caught my attention cause I really like interdimensional travels. I think this story has a potential but I think the MC is a bit too over preserved and hinders the things that he can do to actually solve the problem abt the mapo bridge. I'm currently reading chapter 17 and I think parvache is sus, he is hiding something from the MC, and I sincerely hope that the MC will man up against the truth seeker and get rid of his cowardly nature, although his personality as a wizard... more>> is understandable bc he experienced information overload when he's just a kid. I really wish the MC will have some character development in the later chaps <<less
0 Likes · Like Permalink | Report

Exquisite world building i like the MCs personality. Not swayed by beauty, kinda immoral but thats due to being raised with self-preservation as his creed via Parvache. i also like his way of doing things. He had a really smart way of dealing with getting enough income to sustain his daily life and build his barrier and he actually used pretty airtight contracts that were based not on the rational mind but on the subconscious so contractee wouldn't be able to lie and get off easy. the stream of logic is really strong.... more>> Looking forward to more chapters :) <<less
0 Likes · Like Permalink | Report
Advertisements
Leave a Review (Guidelines)
You must be logged in to rate and post a review. Register an account to get started.

Reborn as Celestial Deity in Outer...