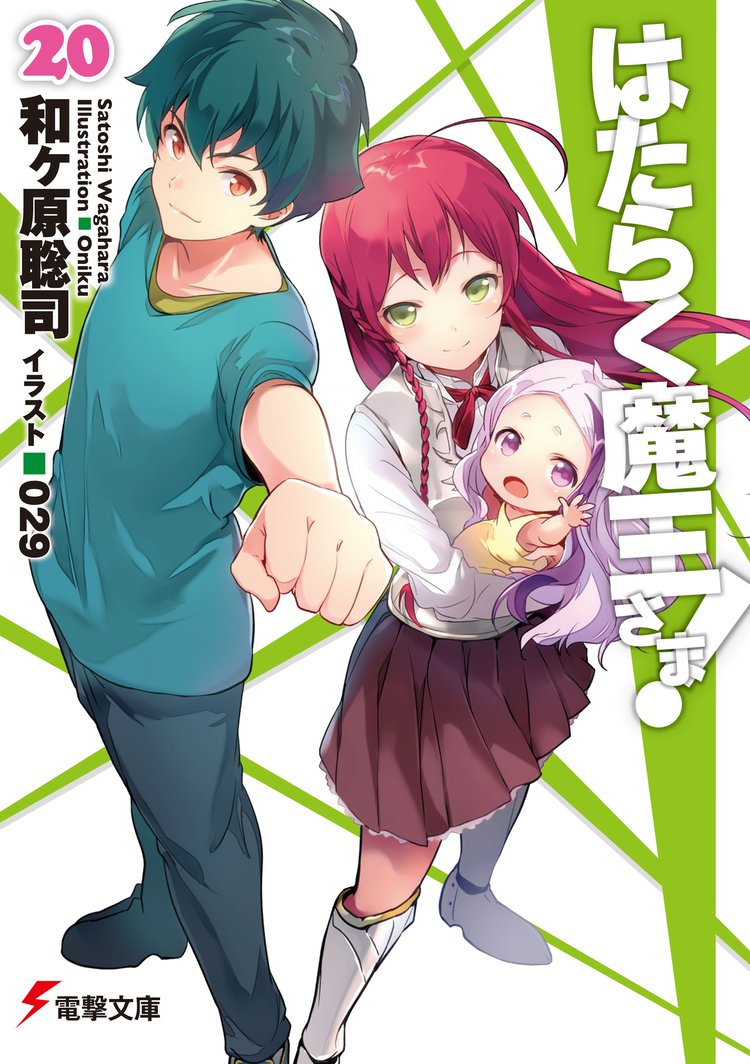 One entry per line
Wagahara Satoshi

After being soundly thrashed by the hero Emilia, the Devil King and his general beat a hasty retreat to a parallel universe…only to land plop in the middle of bustling, modern-day Tokyo! Lacking the magic necessary to return home, the two are forced to assume human identities and live average human lives until they can find a better solution. And to make ends meet, Satan finds gainful employment at a nearby fast food joint! With his devilish mind set on working his way up the management food chain, what will become of his thirst for conquest?!

One entry per line
Demon Lord at Work!
The Devil Is a Part-Timer!
Working Demon King!
はたらく魔王さま!
打工吧！魔王大人

These are recommendation lists which contains Hataraku Maou-sama!. You should give them a visit if you're looking for similar novels to read. Alternatively, you can also create your own list.
More Lists >>>

Hataraku Maou-sama is a story with great characters, interesting plot and endless possibilities.
I enjoyed reading even the side stories about mostly unimportant characters. Then why did I gave it just one stars ?
Simple. Ending.
The ending of this story is so poorly written, I think even a ten year old would have done better.
Author accomplished great things with an interesting idea, then he took up a gun and shoot it.
It is just terrible. There were even some extreme readers who threatened the author or just send a message... more>> like "Die". <<less

It's Good! I like the light entertainment content (?) The demon king and hero of Another World, living in modern-day Tokyo. In order to bring three meals a day, they working like normal human. Lol~ Nice Drama-comedy - Slice of Life with Slow Romance and a magic-Fantasy at the end of each volume. It's so good that with the secret revealed little by little gradually I think it's alright even if it's turn into more serious Fantasy. And the author didn't disappoint me, later on it will become more serious, while still... more>> maintaining Drama-comedy - Slice of Life. For the romance part, (even though I could count as anti main heroine type), but gradually the main heroine in this novel become my favorite. I like the slow romance, little by little the heroine open up, and eventually growing fondness for MC. All in all, it's a good light reading material ^^ <<less
13 Likes · Like Permalink | Report

Calling this light novel as underated would be sinfully understated. That, of course, stems from this being licensed. The amount of quality content is so ludicrously enormous, that it took 2 Volumes out of the 12 Volumes present, to deliver a full-blown 12 episode anime. Which was, btw by no means slowly paced. A near perfect blend between comedy, suspense and Romance in a well-written plot. Slice of life or action, both of them done right. Frankly, this has the best love triangle I've seen. so far, in this genre.... more>> The fact that 'Fictional characters' could be as reasonable as this, came as a pleasant surprise to me. Epic. The likes of other light novels like Tate no yuush or Zero no tsukaima, simply are appear inferior to me, after having my venture into this one. But what makes this novel special, is it's absolutely lively and well-fleshed out Plethora of Characters. None of them are bland. Whether it's primary main characters of Maou, Emi and Chi or just minutely secondary characters like Ashia, Rika or Lucifer etc... each and everyone of them, is a harmonious resonance between modern day reality and there fantasical alter-egos. Finally, I would like to express my thanks to mittens220 for their awesome decision to translate this. 5/5 <<less
10 Likes · Like Permalink | Report

It is very, very apparent that the translation team needs a beta/editor. A lot of times I keep reading paragraphs with incorrect grammar, spelling, or down-right confusing the characters with another (I.E. Sentences like: "Suzuno said this to Suzuno.")

It sometimes gets difficult to read, and I honestly could bring the score down because of this, however this would not reflect on the LN's over all story/writing style so I can't really bring it down.

Emilia:
Emilia-a-shit!
She's a basic Tsun-tsun who, only at Volume 6, hasn't shown anything you could consider even remotely cute. You could defend her for being "broken" because she doesn't know what to do with Maou (since he's originally her enemy and target of vengeance), but this does not excuse her for being shown as a sh*t character with an emotional range of her flat chest. Basically, she's been shown as nothing but a complete bit*h and is only mentioned off-screen to be "kind".
This is a terrible way to show off a main heroine, as we never see the "off screen her" where she interacts cutely like a normal girl and isn't always the pissed-off bit*h that we always see.

Best girl by far. Has shown character growth from the very moment we see her and has gone out of shy shell, even as far as confessing her love to Maou. She's even willing to learn magic, not as a way to get stronger, but because she wants to lessen the burden she is as a "normal girl" to Maou and the others.
10/10.
Deserves to be the Demon Queen.
Would point my feet away from her direction from sleeping

Actual girl I'm rooting for. Chiho is just best girl by what she's shown but, I'm hoping Suzuno somehow worms her way into being his mistress or something.

She's has gap-moe! That's why!
By default, she has a serious character, but when she gets flustered, she acts in a cute, girly way and doesn't react so violently as Emi. Sadly, she hasn't gotten much of a spotlight just yet. She'll get more probably around v9 so I'm making my way there.

Currently at Volume 2 chapter 3. It might seem a little early for a review, but I think my current critique would follow out throughout the story.

The author's writing style is bad when it comes to new characters. In the beginning, it isn't that noticable, but it becomes apparent as more and more characters are introduced. This is VERY apparent at the end of Volume 1 where the other members of the Hero's party arrive after the battle.

This also happens on conversation topics and event scenes. They suddenly seem to change without any warning to the reader.

Granted, it's not unreadable, but it is this story's flaw! The story itself is interesting where you'll have to read in-between the lines to understand the characters completely. Definitely recommend it, but it's not a very light read. Prepare for some introspection.

But in my opinion I hate when the topic is about Chiho and Maou's vague relationship... When Chiho is so depress because of her love situation... Also at volume 15 I hate how the author wrote his style on going back and forth on the timeline every chapter....

[collapse]
Well this is my personal opinion but overall the LN is a good read... BTW this is my rank on the heroines 1. Suzuno-chan - Best gurl in the light novel 2. Emilia 3. Chiho
1 Likes · Like Permalink | Report

This is one of the best light novel I ever read. The comedy is really good to make the reader hooked on it. The romance is slow but sure that make the heroine in this novel become lovable. The side character did not bland so we can tell all their characteristic include the enemy. The drama about how the hero and demon king interact to each other in social world really interesting and how they face enemy together really good too. Overall, this is one of the best light novel drama-romance-comedy... more>> to read. 5/5 <<less
1 Likes · Like Permalink | Report

Can't never have enough of this, sure it have some flaws but the best part of the series is all of the cast are very interesting and have excellent dynamics with one another. Plotwise the story is rather wild to be honest but who cares? The interaction between the characters whether main or supporting are very intriguing especially with how much mess they're put into
0 Likes · Like Permalink | Report
Leave a Review (Guidelines)
You must be logged in to rate and post a review. Register an account to get started.

The Villainess has it Easy