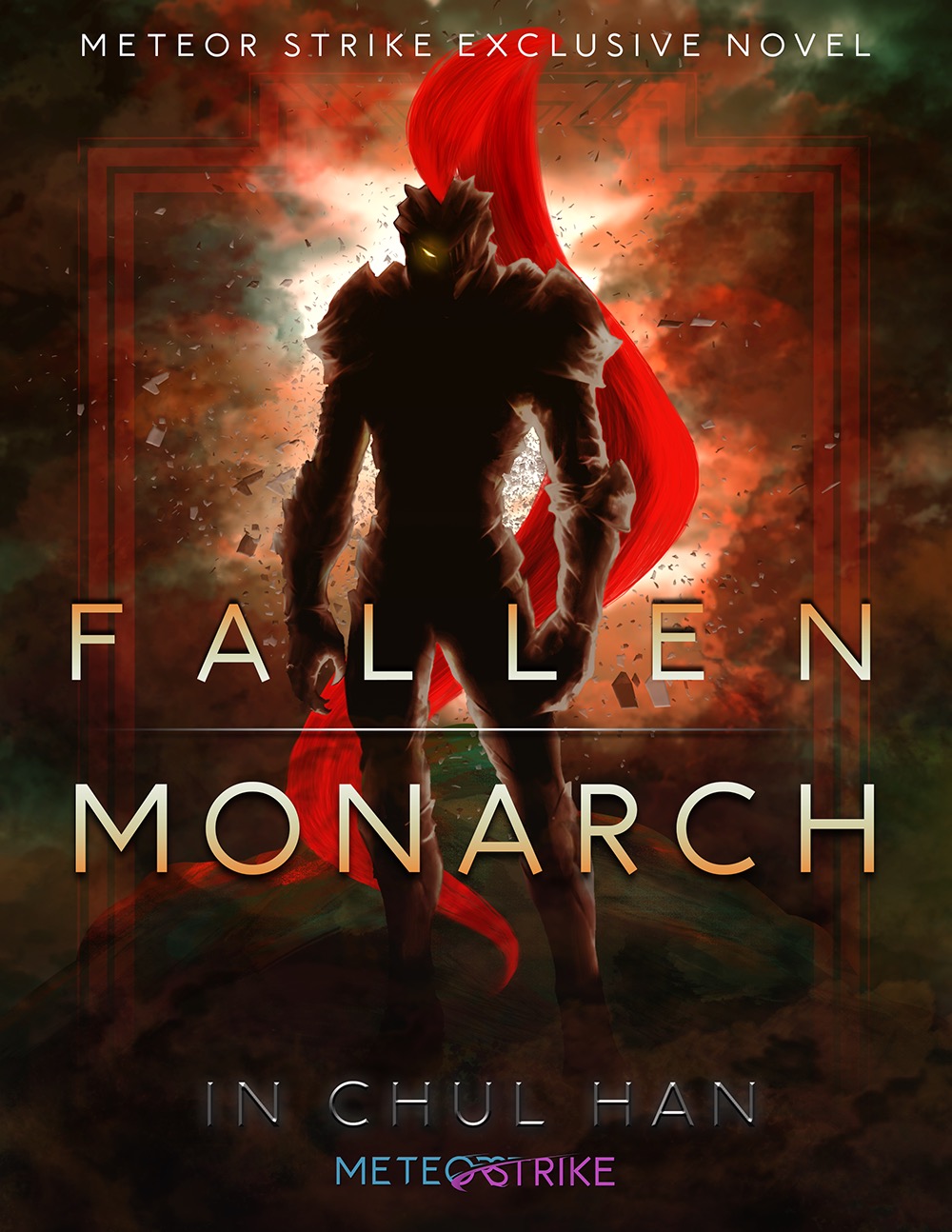 One entry per line
Joshua Cayetano

Status in Country of Origin. One entry per line
152 Chapters (Completed)

The Demon Lord, humanity’s greatest enemy. Every few decades one rises to power, threatening the human realm and all who inhabit it. To stand against the Demon Lord and its armies, humanity relies on Heroes who are sent forth to face the unfaceable.

Thoma was one such Hero, though he defeated his generation’s Demon Lord over 20 years ago. Now, he is but a simple monk living in a remote abbey in the mountains of the Holy Kingdom, where he cares for abandoned children and orphans of war. Though his life has been peaceful for a long time now, things are changing. Times are getting tougher and the abbey is struggling to make ends meet. Thoma knows the future is uncertain, yet he continues to struggle toward a better tomorrow.

Will he succeed, or will the past he left behind finally catch up to him?

These are recommendation lists which contains Fallen Monarch. You should give them a visit if you're looking for similar novels to read. Alternatively, you can also create your own list.
More Lists >>>

I really want to like this novel, but after reading the few latest chapters it's difficult for me to do so with such a ignorant MC. The writer tried to cram too much in the start and it became an utter mess; remember the MC is not some kid, he's at least over 35 years old. ... more>>
Spoiler

From the start we learn that the MC is surrounded by desperate, poor, greedy, and corrupt people that are willing to do anything for money, however you can't fully blame them as the "holy church" takes 50% to 70% tax from the people (the novel states 40% standard, but we later find out that is only on paper, and because of war it changes to 60%). There are very few people around him with the exception of the kids and maybe a nun or two that aren't scheming behind the MC's back (yet?). They all suck up to him because he's the almighty hero that defeated the demon king, but laugh at him behind his back and how stupid, blind and ignorant he is.

Thoma has a special skill that allows him to know if others are lying (based on color) that I don't believe anyone knows about or very few that knows, however despite knowing that others are lying, deceiving him he chooses to ignore the matter and let them off with a "don't do it again speech". On another chapter, Thoma is given fake/dangerous medicine by a person whom Thoma sees as a father figure and even though he knew for a fact he's being lied to, he choose to accept the medicine and even give them out for others to use.

[collapse]
For a "hero" and a person with 40-50 years of knowledge he sure acts like a idiot. He is blinded by his hardcore belief that the church is good and the so called "demons" are out to destroy all of mankind. The writer tries to come up with all these reasons that will cause Thoma to snap and join the dark side but enough is enough, I'd find them believable if the MC is some gullible 12 year old kid, but for a hero and a man well past his prime is just stupid and unbelievable. We all know at some point, probably when he loses all the people that he loves he'll become the demon king/lord. Went from a 4 to a 2 from me afterwards. Edit: More betrayal by those around the MC, the more I read this the more annoyed I get. I have put this novel on hold as the novel hasn't gotten any better. May come back to read it later in the future or not; when more chapters are out. I mean at this point, it's pretty damn easy to figure out how this story will end, MC will become a demon lord/king to purge the world of its greed/evil by the holy church after being betrayed by those hes served and help and having those that hes loved slaughtered. <<less
21 Likes · Like Permalink | Report

8 chapters in and I can already see where this novel is going in the near future, and it is going towards the worst of korean novel cliches. This kinda reeks of those revenge chuunibyou japanese novels, only with a korean twist at it, and better character writing because of it (not as much as other korean novels tho). If these novels interest you, check this out. For every other person I can't recommend this, as how prepotent this plot is. It features: betrayal, rich people are evil, characters that are in... more>> the plot just so that they can die so that MC goes into despair. This may sound like a spoiler, but it really isn't, because although I didn't read it happening yet, in chapter 2-3 the flag was planted. <<less
10 Likes · Like Permalink | Report

For those who rate this 1*, it is understandable. For the prolouge of the series is 21 chapters, and unbearable as MC is suffering and helpless, but from his own action. for those that cant stand reading even 10 chapters of this can just skip to the 17th chapter and enjoy afterwards. this is a small summary for those that want to skip the first 17 unbearable bland chapters ... more>>
Spoiler

-MC used to be a hero, but a slave before hand

-Found a corpse of a ancient 'devil' below his church

-spend time after hero into a monk, raising an orphanage

-his old comrade, the pope went into path of corruption, detest the MC and will kill innocents only because it displease him

-MC saved by another old comrade knight, but when going home found the orphanage lifeless and all lives killed

-curses the pope and cant heal the church's sister

-went to the ancient devil, wants to destroy the world but remember the sister's dream, to make the world a better place,

-so went forth his power of death and holliness

so far those the important things, f*ck the pope, f*ck the prince and also MC is kinda dumb, probably because he was a slave (no education, no sense of identity, no sense of purpose or goal until this 17th chapter)

Oh my god is this series good. It takes every plot hole known to traditional fantasy and isekai and fills it in, making me want to learn Korean to keep reading. The world takes a few chapters to get fully grounded, but after the events snowball into one another as things quickly spiral out of control, but in a predictable way if you read very carefully. You can tell the author put a lot of thought into the series, and I'm excited to see where it goes!
7 Likes · Like Permalink | Report

Very interesting on how the author decided to start this novel. Starts off slow but I can definitely see the author cares a lot about background and world building. Very excited for this novel and will update my review when there are more chapters.
5 Likes · Like Permalink | Report

Makes me sad to see this novel reviewed so poorly by some people that couldn't even read past the prologue to the actual story. It's not my job to argue against reviews I disagree with here, but I will say that this novel is not as straightforward and predictable as some reviews make it out to be. There are twists that you won't see coming, and when they happen you'll be left wishing for more chapters. The side characters and our MC are fleshed out pretty well and feel like real people.... more>> I actually like how the MC isn't a perfect infallible person; he still makes mistakes, and is still subject to a worldview and belief system he's had his entire life. The MC isn't stagnant and continues to learn and change as a person, especially when his beliefs are challenged by events in the story. While I can understand people looking at the surface level and coming to the conclusion that rich people = bad, this is not the case. It's not them being rich that made them evil, but their lack of morals and evil natures which made them rich. While this distinction my seem unimportant to some, it falls in line with perhaps the story's biggest motif: absolute power corrupts absolutely. This may not be the most original message, but it's certainly included in an enjoyable way within the story. All in all I really like this novel. It reminds me of a western fantasy novel more than a translation of a Korean novel, and it's a good read. <<less
3 Likes · Like Permalink | Report

Not like most novels on here - what would be a five page prologue for most Korean/Chinese/Japanese webnovels takes a solid twenty chapters, and the characters introduced don't just get thrown away. Ellie/n are adorable. I guess it's worth reading if you like books, but it's not really like most webnovels so far.
2 Likes · Like Permalink | Report

It starts off a bit slow IMO. But the plot seems excellent so far and it ramps up excellently. Looking forward to more.
2 Likes · Like Permalink | Report
Leave a Review (Guidelines)
You must be logged in to rate and post a review. Register an account to get started.