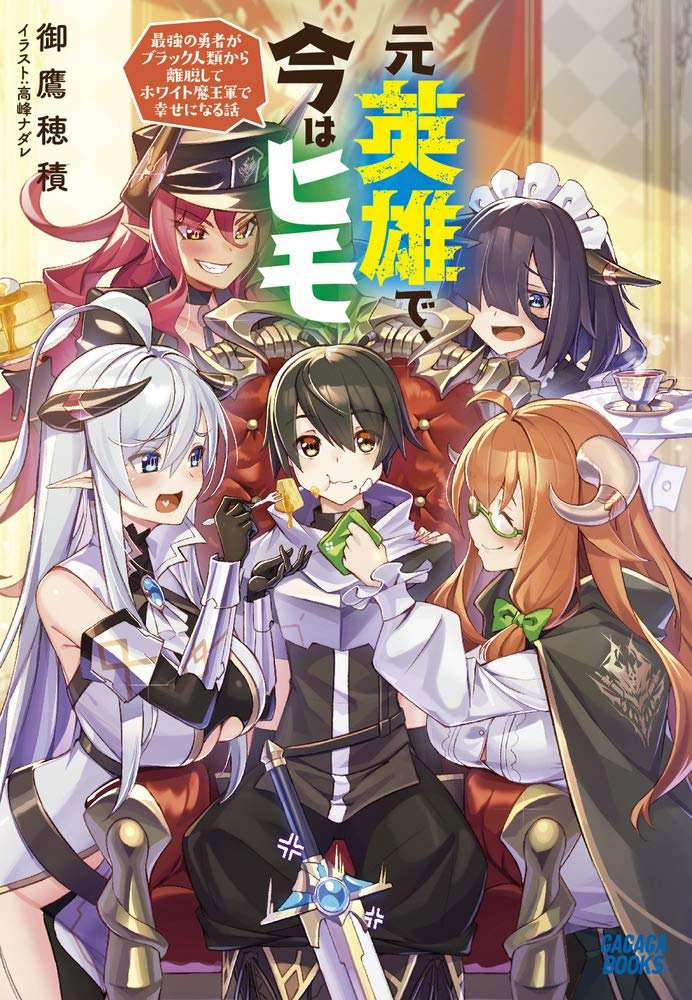 One entry per line
御鷹穂積

There are Six Saviors in this world.

A Sage of spellcraft, a healing Saint, a Swordmaster, a Magical Archer, the resourceful War God, and…the all-powerful Hero.

The Hero wields strength suitable to be called the world’s strongest, especially since the Hero has been trained since childhood by the other five.

On the day that the Hero turned 15…he betrayed the world and went over to the Demon King Army’s side.

His reason was simple…「I mean…they treat me better over there.」

He gets to eat delectable food, sleep on a luxurious bed and bathe in a massive tub, on top of being friendly with the adorable maids, kind Big Four, and the warm Demon King.

Compared to life on humanity’s side filled with severe training and constant life-threatening battles, life as a Demon King Army freeloader is pure bliss.

Rejecting humanity, the bright and fun-filled life of the world’s strongest freeloader begins!!

These are recommendation lists which contains Ex-Hero, Now Freeloader. You should give them a visit if you're looking for similar novels to read. Alternatively, you can also create your own list.
More Lists >>>

I can't decide if I like this story or not. I've never been a fan of the dense protagonist trope and I dislike how insanely thirsty them women around him are. On the other hand the MC knows that there are things he doesn't understand about what the women are doing but he simply doesn't really care to know so he brushes it off. That's better than an MC who doesn't even see the strangeness. Other than that the story is almost entirely light hearted fun.
0 Likes · Like Permalink | Report

I'm surprised that this novel is scored so low, because while it might not be one of the best, it's good enough to pass the time. The interactions are good and funny most of the time, and the novel hasn't fallen in the trap of repeating the same joke over and over. The plot is nothing too impressive, but good enough to not drag the novel down. My score might change as more chapters are released, but for now I recommend it
0 Likes · Like Permalink | Report

So, the Op hero is inhumanly stronk and unusually (actually this is a common trope in novels, but ok) displaced from social and human interactions. This is the MC of the novel. He gets rescued by (one of the) people he rescued years ago. Those people are actually the group of some of the most powerful cards of the demon king/Maou kingdom. He was rescued because the said Da Seven thinks the way he is treated and used by his companions is wrong, he should be capable of living a good... more>> and nice life, not as a machine hero that only exists to save humanity. This is the basic plot of this novel. The good - funny interactions and misunderstandings. Especially the holy sword is funny, regardless of being kind of a nuisance, her interactions with the hero are nice.
Spoiler

Considering the fact that she feels kinda guilt by being with him, and forcing him to this path (at least somewhat) and even the fact that she is scared to lose him as not only himself but the relationship the two have, as the other heroes only treated her as a tool, not as a sentient being. So Mika is a nice character, prove me wrong.

[collapse]
Learning how to deal with people, or even trying to play with others is nice too. And the blunders while doing so can be nice to see. But, he trying to be normal while being an OP monster, while funny can get stale as there is only so much you could do with it and not end up in a loop. When I say stronk this is really downplayed. He can solo most of the high-level enemies. This could be boring for some. It can be funny but, as with the blunders, it could be repetitive. I would recommend if you like harem where 7 (+) girls try everything to get the bowl while attacking each other, while the MC is oblivious to it. Add to that an extreme OP MC that is just "da normal dude kinda social awkward" that is trying to regain his life (somewhat) and this is the novel for you.
Spoiler

There are some loli orbiting him, so be advised that this could follow some strange path in the future. I hope not, even when they get older, but we are talking about JP novels here.

It's early to judge considering there isnt much chapters out there, so this will be mostly about expactations. Story is about MC betraying the human race and joining demon's side because demon's side offers humane conditions, demons entire race isnt under 1 flag, and MC joins the good demons. MC looks like one of the "lacks common sense" protagonist because of how isolated he is raised but has some proper education so its nothing extreme and bothering unlike other no common sense mcs. Characters are rather extreme on personalities and because... more>> of the setting of the story, they are full of empaty towards MC. As you might have guessed from the content, story lacks in world building and characters talking to each other and events progression's feel surreal. All of these bad sides of the story's density is near to the point of plotholes, but this is a webnovel so that's okay. And as I said, there is too little chapters to make judgements, they might get better in future. As of now I dont expect anything over the top and it would be a decent one if author manages to make the story more interesting and exciting to read without ruining it with making the sides do anything extreme or dramatic and make them collide with each other. <<less
0 Likes · Like Permalink | Report
Advertisements
Leave a Review (Guidelines)
You must be logged in to rate and post a review. Register an account to get started.