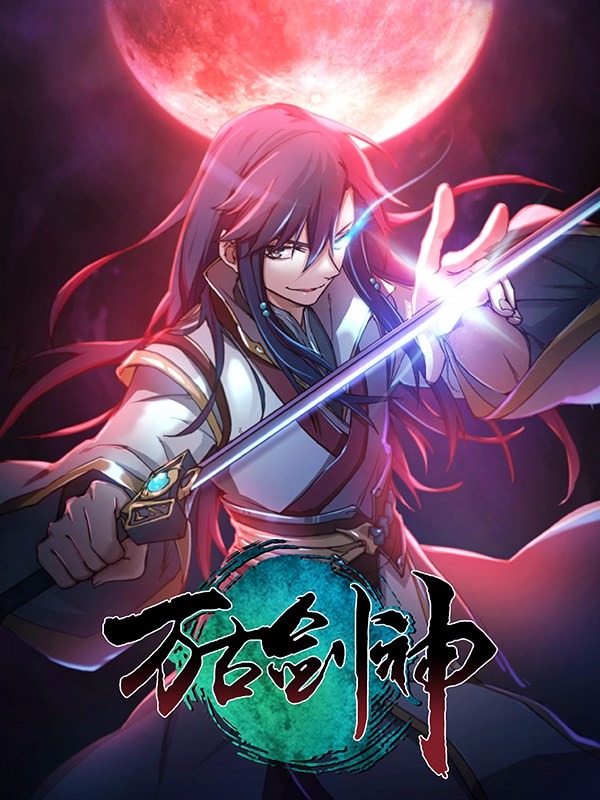 One entry per line
蒙白

Status in Country of Origin. One entry per line
773 Chapters

He was The Greatest Talent in the Nine Hells Realm.

Shen Zhenyi began to practice his sword when he was four years and two months old.

At the age of seven, he studied the Ten Thousand Sword Sutra. By the age of eleven, he fought against the Yudao in Shangqing Palace. In an instant, he unleashed one hundred and eighty-five sword strikes, making it impossible for anyone to retaliate. The Yudao admitted defeat and deemed him as “The Peerless Genius.”

At the age of 14, Shen Zhenyi, with his Six Forms of the Ancient Sword, surpassed the swordsman Zuo Tianxing who was ranked among the top ten masters in the world, and won the title of “The First Swordsman of the Abyss.”

He now lies crippled. A fraction of the state he was in before. Or so they thought.

One entry per line
万古剑神

These are recommendation lists which contains Everlasting Sword God. You should give them a visit if you're looking for similar novels to read. Alternatively, you can also create your own list.
More Lists >>>

Garbage. Top tier garbage. I gave it a fair shot and tried to find something good about it, but I couldn't... on the other hand I found plenty of flaws. The author simply isn't a good writer nor is he that smart (or at least not thoughtful and thorough) and it reflects on the story and characters. We're introduced with how awesome the MC is with some weird world setting that doesn't make much sense and isn't interesting or intriguing by any meaning of the word. Then we quickly ... more>>
Spoiler

find out that he's obviously not crippled at all, what with him instantly killing assassins and threatening people. This is also where we can see, in the clearest way, that the author makes his characters ret*rded. Like the assassin, he is easily found by the MC despite hiding and the MC can even discover all of his capabilities despite supposedly being crippled, he also warns the guy and says that he needs to think before acting because what does he think happened to the other assassins? So, the guy, despite feeling threatened somehow comes to the conclusion that he's crippled and obviously can't do anything, as if it's an indisputable fact that couldn't possibly be wrong or old information, and attacks only to be killed by the MC who pretends to be all chill about it. Then there's a girl soon after who did the same thing all over again (after just 2-3 chapters), warned and threatened with killing intent yet she somehow thinks that her information can't possibly be wrong (do note that this is after the MC got out of his wheelchair and even stopped her attacks easily), only to find out that he wasn't bullshitting. In other words, the author makes the other characters utterly ret*rded in order to make the MC seem so much better and more intelligent, it just doesn't work that way though and it makes the entire novel cringeworthy...

The author tries his best to make the MC sound cool, mature and awesome, but he ends up seeming like a pretentious little sh*t with average intellect at best. However, the rest acts like toddlers, so he's indeed superior to them. Adding on lots of titles like him being the strongest in the world doesn't make it better. Seems the author has no grasp on the "show, don't tell" principle. No matter how much you pretty him up at the start, he's no better than what we've actually seen with our own eyes.

Then there's the author who attempts to show off how attractive the MC is by making girls fall for him. Let's take the first girl we see in this story. She's a weak girl (compared to him and her sister who just happens to want to kill her because of family reasons) and she's cowardly and timid with a lack of self-confidence. She's trying to get closer to the MC because she loves him and because she wants to survive and learn his techniques. Now, the sister comes along and starts bullying her in front of her sister and she doesn't dare to do anything, but when her sister tries to harm the MC, she gets all of this weird courage all of a sudden. That was some of the most forced and horrible sh*t I've ever seen. The author, several times in a single chapter, mentions how she would actually not dare to do this or that normally but she somehow got courage despite the risks because she loves the MC. He tries to shove it down our throats how much she loves him and how perfect she is for him, it personally made me feel like she should just disappear forever... Romance is not to be forced into the story, period.

[collapse]
I'll just keep it at that. It's simple enough, don't read this. Any average xianxia would be better. That the translator translated it poorly so that it doesn't flow well doesn't make it better. Definitely a miss. <<less
4 Likes · Like Permalink | Report

This MC does not start weak at the beginning of the novel but already reached the end of cultivation in this realm and is just about to soar. The story is about him easily soaring from one realm to another while he comes across descendants or spirit witch he has sowed karma with in his past life while teaching his disciples.

Typical MC who believes in order to reach the truth of swordsmanship he must be detached and not leave any ties in the world, yet goes around causing trillions of life to perish blaming it on fate. Saying they would have died either way even if he did not interfere (or pushed the red button)

Story is nice, one of few stories where MC does not suffer constant bullying. But crappy MC nonetheless.

If your purpose is to reach the peak and go against heavenly laws and sh*t why fear leaving ties in the world and having kids and stuff, you already have family wherever they are ancestors or descendants does it really matter?

He knew that when he broke the moon a second time to the 7th realm the fierce beast would appear and billions would die if left unsolved so what does he do? A month long bath just like he took month long break before. WTH?

I could have solved it as powerless mortal so how could he not? Jus tell them to build a freaking wall, solved.