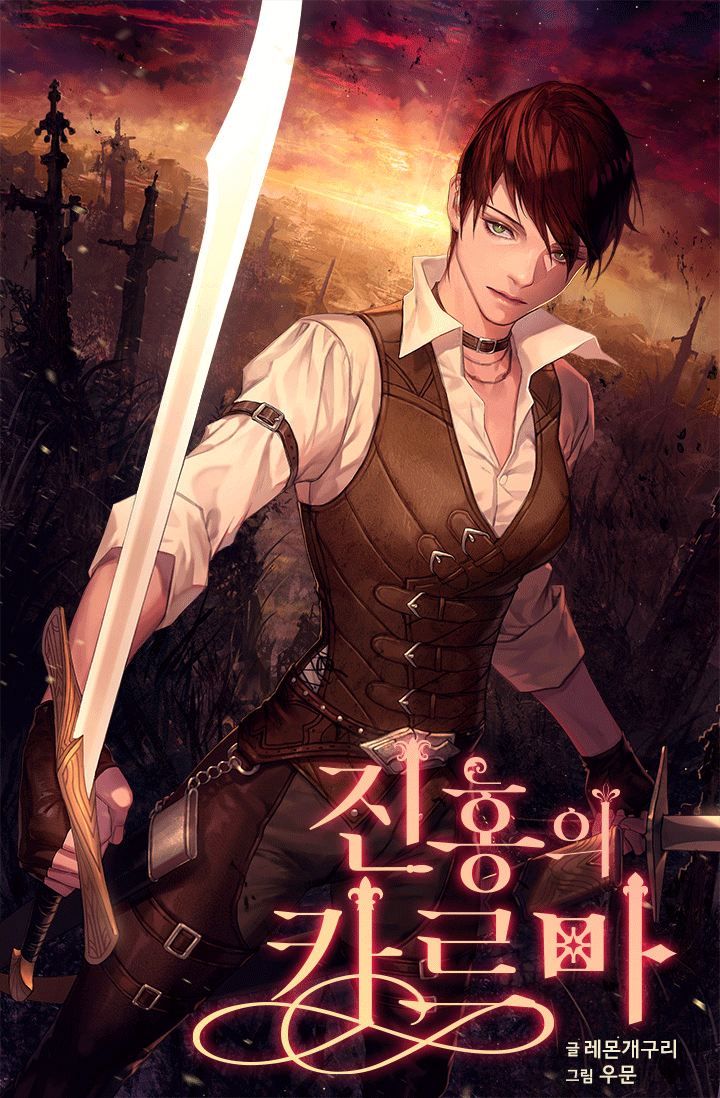 Status in Country of Origin. One entry per line
160 Chapters (Complete)

“Death is believed to be a very terrifying experience. But in fact, it isn’t.”

Kasia Del Roman was a powerful soldier who was nicknamed ‘The Reaper of the Battlefield.’ She had lost her human emotions long ago and lived all her life as a tool. But when all was said and done, she couldn’t even have the privilege to die a proper death.

‘You have to go back and live another life…’

A voice, booming and frightening, rang out in the silence.

She opened her eyes without experiencing the peace she had always craved for. Lo! It was yet another battlefield of an unknown world.

“Truly a miracle! She is alive!”

Thus, Kasia starts living her new life as a war machine. However, different circumstances open her eyes to new and unique emotions she had never felt in the past.

Even so, where will the karma of her past life lead her to?

These are recommendation lists which contains Crimson Karma. You should give them a visit if you're looking for similar novels to read. Alternatively, you can also create your own list.
More Lists >>>

I know this story from the manga version, the manga has lots of chapters translated, so if in doubt you check that up too. I love this story as the protagonist is business-like kickass. No romance at this point of the story, and it honestly doesn't need that stuff to be a good story with a femal protagonist. I would for sure follow both the manga and novel translation.
20 Likes · Like Permalink | Report

i am reading this through the manhwa version, but it's really good. The FL is really BAMF in a knight/fighter type, so it's really refreshing. The story it self is more focusing in war so the romance is minimum but the plot is very good so I am in for the story itself. ... more>>
Spoiler

the FL was originally some kind of colonel/assassin/spy in her past life. She was cold, rational, and emotionless because she was trained as a soldier since she was a child. In the end she was betrayed and killed by her boss after successfully gotten rid of a terrorist group. When she died and in the state of limbo, she got reincarnated bcs of all the lives she had killed. She reincarnated as a knight in a war once again. But this time she can feel emotions again and got people who cared about her, so she tried to redeemed herself by doing her best protecting the people she has gotten care about and try to live her lives to the fullest.

[collapse]
it's interesting seeing the development between characters, from the suspicion she got that turned to trust and the camaraderie between the prince, kasia, and the knights. Admist the seriousness of the plot, there's still a good humor in the story. It's interesting when we got to the romance because there are 3 potential ML but
Spoiler

she will ended up with the archmage. It was really funny when ML and 2nd ML tried to get kasia attention but she was clueless to it.

This story, for me, is really good! Kasia del Roman is our MC who is dubbed as a machine in her last life for having no emotions at all and is killing smoothly as ordered, reincarnated to a swords and magic world as a female knight called Dame Kasia. The premise is good, the MC is not the annoying type of female lead. She's independent and a fighter. I'm just kinda sad because there were times that she still thinks sometimes that she's a tool or a machine. But in... more>> her new life, she gets back those emotions and continues to live that world with some people to care about. As for the ML? I do not want to spoil but there are 3 potential ML. Though my ultimate ship is
Spoiler

the archmage Ernon! Such a cute cinnamon tragic bun

[collapse]
All in all, it's a good read. It does not focus on romance so it's not annoying. Thank you translators and author! <<less
3 Likes · Like Permalink | Report

The manhwa is Soo good! This is the 1st time I've finished a manga completely, the plot, the art, the characters were so good and beautiful that I couldn't stop reading! It is one the best story I've ever read and love all the characters equally!
1 Likes · Like Permalink | Report
Advertisements
Leave a Review (Guidelines)
You must be logged in to rate and post a review. Register an account to get started.