Novel Updates
RegisterLogin
Theme
Search
Your changes has been saved.
After Rebirth, I Returned to Miaojiang to Inherit My Family Business

Home >
Novel >
After Rebirth, I Returned to Miaojiang to Inherit My Family Business 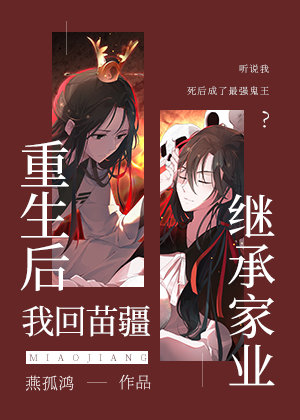 One entry per line
燕孤鸿

Status in Country of Origin. One entry per line
Complete (283 chapters + 9 extras)

Wu Rong died in his last life, and his half life’s hard work was given cheaply to that pair of scum man and woman. He didn’t expect that after closing his eyes, he opened them and he was reborn!

But the world after his rebirth, it seems, something is wrong?

Scientific subversion, miraculous recovery! Aunties danced in the square with the Dancing God, and the pen fairies in the stationery shop were out of stock. The whole society started a metaphysical upsurge. What’s more, since Wu Rong’s rebirth, strangers have been scrambling to call him.

Stranger B: Boss, it’s me! You should quickly die and we will rule the world together!

Stranger C: Hahahaha Wu Rong, Wu Rong, I’m back. Just you wait. I’ll eat you one mouthful at a time to relieve my hatred!

Stranger D: Hello, is it Wu Rong? I’m the Director of the Federal Security Administration. Please pay attention to your own safety and don’t die!

It’s said that after my death, I became the strongest ghost king in the world and almost ruled the world?

There was something wrong with this miraculous and resurgent world. Countless people and ghosts have been reborn from the future of the reign of the ghost king Wu Rong. At this time, in the future, the ghost king Wu Rong, who was full of resentment and hatred, tyrannical and murderous, was still just an unruly little gangster, Brother Rong.

Some people wished Wu Rong would never die and just live like a bastard. Others were eager to see the Ghost King come earlier. Even the resentful ghost begged and couldn’t help being infatuated to the extreme, loving him enough to kill him…

As a result, under the multiple influences of the rebirths, Wu Rong has lived a colorful life since then, and even went back to the Miao area by accident to inherit his family property.

A few years later, the reborn people found out that the plot was not quite right.

Where is the Ghost King Wu Rong??

Who was this genius Gu master who appeared in the world news all day long?!

One entry per line
重生后我回苗疆继承家业

These are recommendation lists which contains After Rebirth, I Returned to Miaojiang to Inherit My Family Business. You should give them a visit if you're looking for similar novels to read. Alternatively, you can also create your own list.
More Lists >>>

I loved the story up until chapter 200 and I would have given it 5 stars- if not for the ending. It just spiralled out of control; if I didn't read it throughout, I would have thought it was two completely different novels. Wu Rong, the protagonist had reasonable power-ups in the beginning.... more>>
Spoiler

He got a contract with what he thought was a ghost king when he fell off the cliff. While that definitely reeks of plot armour and golden fingers, it's not unheard of.

[collapse]
When he went to the Miao village, he obtained the Gu he needed.
Spoiler

Which turned out to be useless in the long run. The tarantula spider wasn't mentioned at all in the later chapters. And his primary Gu, which took an unreasonable amount of time to hatch considering he had all the resources ready, was a Maria butterfly. This long-awaited Gu was useful for all of one chapter.

[collapse]
Wu Rong's secret identity, the power he continuously got from 'the depths of his soul' was
Spoiler

him being 'Order'- the concept opposite of Chaos.

[collapse]
It was ridiculous. Why couldn't the author make him some other form of a higher existence? Even some sort of God would make more sense. How can a 'concept' gain feelings? And why did he have a human form in the first place? All the plot holes and and unanswered questions made it feel like I was hallucinating. The villain turned out to be
Spoiler

Tong Fuyuan, the university professor. Like the MC, his identity kept getting wilder and wilder. From a shady professor, he turned into a high-up member of the Holy Wedge Society, to somebody who seemingly had a different soul in him that somehow previously knew Wu Rong, to finally the the guardian of the Celestial Clan who made a contract with 'Chaos'.

[collapse]
It felt like the author was trying to foreshadow and throw in a couple of plot twists. It was highly ineffective; it felt like a mish-mash of a bunch of random different ideas. There are a lot more things I could mention, like seemingly important side characters like Wu Rong's yellow-haired friend,
Spoiler

who was one of his most important right-hand men in his previous life as a ghost king,

[collapse]
having no use to the overall plot at all. It was also confusing distinguishing between the MC and his grand-aunt, who both had the name 'Wu Rong' when I MTL'd it. Overall, a really disappointing ending that ruined the whole story. I didn't even bother reading the extras. Even 3/5 stars is me being generous, in my opinion. <<less
0 Likes · Like Permalink | Report

I'm really excited about this one, bc it's gist is similar to 'I'm not shouldering this blame'. After reading that I was looking for similar tropes but couldn't find one, so when I came across this I was really elated. So, in this novel, our MC was in a high position in the gangster scene (it's not specified), and he dies in a car accident.
Spoiler

After his death, he becomes a ghost for some time, and he sees his boyfriend takes his money to buy a diamond ring for this girl (the leader's daughter), and gets married to her. Turns out he had a thing with her for the past 5-6 years, so he made MC wear a green hat for quite some time. After rebirth, MC had him beaten up by his junior brothers and kicks him out the bar!! Hihi it was really fun!!

[collapse]
Later MC gets reborn, but here's the twist, he gets reborn in an alternate world where the world has been attacked by these ghosts full of resentment. And after struggling for years, humans have finally reached a balance where, although ghosts are still dangerous but they're not invincible. After he died in that world, he became a ghost king (but our current MC isn't aware of that) and takes his revenge.
Spoiler

His "boyfriend" of the alternate world also gets reborn, but it is from the time when MC as ghost king kills him.

[collapse]
As far as ML is concerned, from what I'm seeing, it could be the
Spoiler

[collapse]
I'm guessing that's him since that's how it works usually. Its updates are also fast. You get 3 updates a week!! It's every Friday, Saturday, and Sunday!! I like this so far, and typically I would've MTL it already but since we're getting the updates quickly I want to enjoy it properly!!
2 Likes · Like Permalink | Report
Leave a Review (Guidelines)
You must be logged in to rate and post a review. Register an account to get started.

Food For Thaught [An Absurd Sci-Fi...