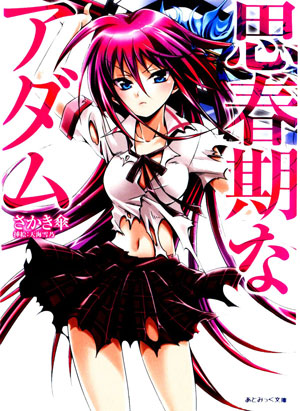 One entry per line
Kasa Sakaki

One entry per line
Yukino Amagai

Status in Country of Origin. One entry per line
9 Volumes (Complete)

A noisy little family, a cheerful group of classmates, and a boy, born on the first year of the lunar calendar living a never changing life. Then one day he notices a girl in his class shrouded in mystery. Her name is Makina. However, the boy just can’t seem to bring himself to talk to Makina. Then one day, before the first lunar calendar month, another mysterious beauty appears. Her name is Rushia, and as she leans in as if she is going to kiss him, she tells him about a mysterious power hidden inside him called the “Snake Eyes.”

These are recommendation lists which contains Adolescent Adam. You should give them a visit if you're looking for similar novels to read. Alternatively, you can also create your own list.
More Lists >>>

Great story, especially if your looking for straight up H scenes. Additionally there are people complaining about there being netorare but truth is...
Spoiler

There is none. MC's powers took out the demon attempting to brainwash and NTR his girl and she came back to him immediately in the chapter after. So no NTR.

Nothing to see here, the plot is non sense. Which is not always a bad thing but the character reactions are so unrealistic and lazy it makes the ero un satisfying. For example he moves in with s*x friends without any protest by parents or even questioning his decision to move out. I recommend other adult novels unless you just want an excuse to read about d*ck going in and out of vagina/ass for a dozen chapters.
The action of s*x is not arousing or else everyone would be satisfied with a picture of a d*ck going in vagina, while we were satisfied at first by such a plain ero, we have evolved since then. Now as we evolved away from apes and chimps we developed something called culture which is defined by a people's laws, arts, morals, knowledge, etc. What I am getting at here is that we are not APES we are humans who need something besides a d*ck smashing into a vagina. We want sexual tension, arousal, humiliation, and most of all plausibility. We want to be able to identify with the characters so they seem to be real people. Incest is a common fetish, but why? Humans enjoy the sexual tension, doubt, required passion to violate the cultural taboos of every people. If humans were satisified by plain ero we would not enjoy incest with is unrelated to d*ck & vagina combo.

As of Vol 4 Chapter 6 they introduce netorare to the story, and thanks to that I think I'll be showing myself the door to this story. We'll see if it takes it back in future chapters but as of this one I'm out.

The novel is about a guy with eye powers to completely seduce women with one look... which leads him to be able to dominate half the world based on the myth... so there are various factions that want to either get him on their side... experiment on him to reproduce the effects or kill him... Among them there are angels, devils and humans... ... more>>
Spoiler

WARNING to some... the MC harem includes a male trap incubus... at first he is seen as a petite girl but SURPRISE! Shee had a device...

Its a good read if you just want to get in for the H or if you started with the Manga version, its a similar situation as Maou no Hajimekata or Himekishi ga Classmate where the manga adaption could arguably be considered the better option. H scenes are well written (or well edited) and the scenes up to the latest chapter (v6c2) cater to a wide variety of H situations, femdom, mind control, tentacles, light NTR, and even vanilla! If you go into this for the plot it has its hooks,... more>> though the protag is very beta (kind of comparable to the male MC of Shakugan no Shana) with him carrying some kind of super power that the various world factions really want - namely the power to insta-horny any woman via eye sight. There's a good amount of intrigue going on and several haremettes are fleshed out and have their own plotlines away from the protag's PV. A word of warning though, it can get pretty dark and there are very (kinda) NTR scenes and the author does seem to like teasing his readers with them, the untranslated bits contain even more of them (still kinda NTR and not really full blown if you want to be specific on the definition). <<less
3 Likes · Like Permalink | Report

NTR-haters would drop this novel because they'll think there is a lot of NTR. But NTR-lovers would be disappointed because there is no proper netorare, just half-assed one. Instead there is vanilla porn of all possible types. Vanilla rape, vanilla tentacle, vanilla harems and at last vanilla pseudo-NTR, lol. So if you are NTR-fun like me, then you can just ignore this. And if you are vanilla-man, then you can read for example "Sisters Violated Many Times in Dream and Reality... " to know that is really can be considered... more>> as netorare, so you no longer mislead people. And then you can just enjoy this sweet story about demons, angels and a sex. <<less
1 Likes · Like Permalink | Report

Rated 4. First off!! If you are here for some good old ecchi style story, then you are in for a big surprise. Why?This is basically an erotica. Be warned. If you are here for an erotica, then jackpot!! The stuff is good. The slight plot which exists is interesting enough. The right balance is maintained for this genre. The illustrations are decent. The TL is extremely good. Also.. The harem is pretty interesting as well. Basically, a fapfest!! However, I gave only 4 because at some times.. The real deal was overshadowed... more>> by the plot. And the plot is lousy, though actually good for a series of this genre. <<less
1 Likes · Like Permalink | Report

While this is a Ecchi novel, the writing is okay the pacing feels fast. But the important part.. The ecchi and "smut" part of the story feels.. Lack luster to say the least.. While not the best, its not the worth novel.
I would write more about it but.. :/ I don't know it didn't leave that much of a impression other then "Give it a try maybe you will like it.."
0 Likes · Like Permalink | Report
Leave a Review (Guidelines)
You must be logged in to rate and post a review. Register an account to get started.