Novel Updates
RegisterLogin
Theme
Search
Your changes has been saved.
Advertisements
A Banished Failure Survives in the Borderland and Becomes an S-Rank Exorcist 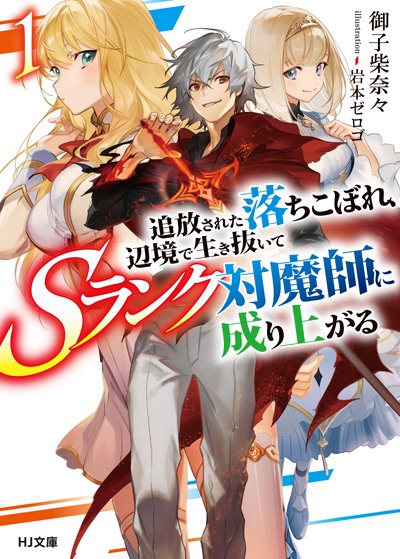 One entry per line
Iwamoto05
岩本ゼロゴ

This world is ruled by the Twilight.

150 years ago, war broke out between humans and demons. The humans suffered massive casualties as a mysterious phenomenon called “Twilight” took over the world. In that world, there exists a certain average boy. One day, unfairly abandoned by his party members, he’s consumed by the Twilight.

Two years pass. In the uninhabitable twilight, that boy struggles like mad to survive. Eventually, he returns to the barrier city with the powerful skills he acquired in the Twilight. What awaits him next?

No matter what, he moves forward, believing that a blue sky awaits him beyond.

These are recommendation lists which contains A Banished Failure Survives in the Borderland and Becomes an S-Rank Exorcist. You should give them a visit if you're looking for similar novels to read. Alternatively, you can also create your own list.
More Lists >>>

The dialogue is... horrible. So bad in fact, I'm more inclined to believe that the author spent a longer time in the Twilight than the MC did.

Not sure if it's too early in the story currently, but I also can't help but feel like the novel has been incorrectly tagged. The protagonist is by no means, "Cold". After being left out to die, the MC is rather eager to communicate with people — holding no distrust to anyone (despite having been bullied and betrayed). The story has also been tagged with "Calm Protagonist, " ignoring the fact that the protagonist cries after a duel, flusters during a conversation, and stutters during speech.

Overall, the design of the main character is terribly inconsistent (Or consistently bad, depends on you) ; The flow and pacing of the novel are all out of place; and again, the dialogue is terribly written. Fight scenes are also glossed over and underwhelming. Where the author spends more time explaining the skills the MC uses over how the MC actually uses it.

Cool world setting though I guess. Kinda like AoT...

[collapse]
EDIT: Guess I was in a bad mood while reading this, and I've noticed the tags being edited... The novel - coming back to it now months after - is not actually all that bad (I'll still leave my previous review up as the points there are still valid). But in comparison to other novels similar to this, it's a much more interesting read. The other characters in this novel are pretty decent and seemingly multi-dimensional (they 'exist' more than just what is seen on the surface), and I've taken more of a liking towards the MC as his character has developed - though if I were to criticize one thing, I feel like the change happened too quickly. Otherwise, not that bad and I've changed the stars accordingly (around 3.8-4.1)
8 Likes · Like Permalink | Report

This is actually quite good. Rather than a 3.5, this is a more like a 4.5. I'm giving it a 5 though, because I give a lot of tr*sh here 5's when they're not nearly this good, lol. Anyway, the writing is a bit stilted and flat at times, but it's not cliched. I like the MC and the other characters around the MC. I think the translation is pretty clean and of relatively high quality. The premise and ideas have been executed very well so far though. While this isn't one... more>> of the best things I've ever read, it's definitely good--better than the majority of works on this site. <<less
3 Likes · Like Permalink | Report

It is your typical Japanese Web Novel, where in place of proper narrative you can expect to see dialog, or the protagonist inner monologue. If you've been around the block you know what I'm talking about either you can tolerate it or you hate it, there is no loving it. As for the actual story I'd say it is alright, setting is post apocalyptic fantasy. That is fantasy not supernatural, the demons mentioned are just your standard fantasy RPG monsters like goblins and wolves. The fighting is dull, it would be... more>> cool but it is told from a 1st person perspective so it is basically just the protagonist telling us what he's doing. "I ducked under his attack, and swung my sword at his exposed side." Basically stuff like that, again though that is the JWN style either you can tolerate it or you can't. Here is the biggest flaw with the story which will probably make it or break it for you.
Spoiler

The protagonist is essentially written backwards, for most protagonist their character is what drives the story, for this guy the story is what determines his character. In the beginning when he needs to be betrayed by his party he is naive, and gullible. When he is left alone in hell he becomes a cold and emotionless killing machine. When he returns to humanity but needs to keep a low profile he becomes a wimp who lets others walk over him. When it is time for him to show off his true abilities he becomes sarcastic and sassy.

This isn't a situation of oh he was just pretending, it is genuinely written that he was too scared to fight back cause he thought people would be afraid of him. His personality just seems too driven by the plot, if the author needs him to run he'll suddenly be a coward, if he needs to save someone he'll magically become heroic. It is just a really big annoying inconsistency.

[collapse]
Overall I'd say it worth reading if you're looking for someway to pass the time. Like something that comes on TV that you watch because nothing else is on and you don't have anything else to do. <<less
3 Likes · Like Permalink | Report

It had potential, you got a trap MC here.. living in women dorm.. Oh boy.. Talking being spicy (he probably cut his long hair later as seen in the novel cover) {I actually prefer if he kept his longhair, but, it doesn't change much}... The Power is unique.. The combat is actually less attractive probably need a better narrative on the combat part. Hopefully it gets better as the story goes on.. the MC interaction with/about demon is actually more interesting than talking with/about another human.. the TL is well and active.. One... more>> thing to note about mc's betrayal..
Spoiler

he doesn't give a f*ck about his former team mate, he doesn't want to kill/ humiliate his betrayer which I totally respect. Don't expect psycophatic MC in revenge story/ the next Hajime

Master of the Pit

My Apocalypse is Pink and Frilly