Novel Updates
RegisterLogin
Theme
Search
Your changes has been saved.
￥1 Trillion Wife, Buy One Get One Free

Home >
Novel >
￥1 Trillion Wife, Buy One Get One Free 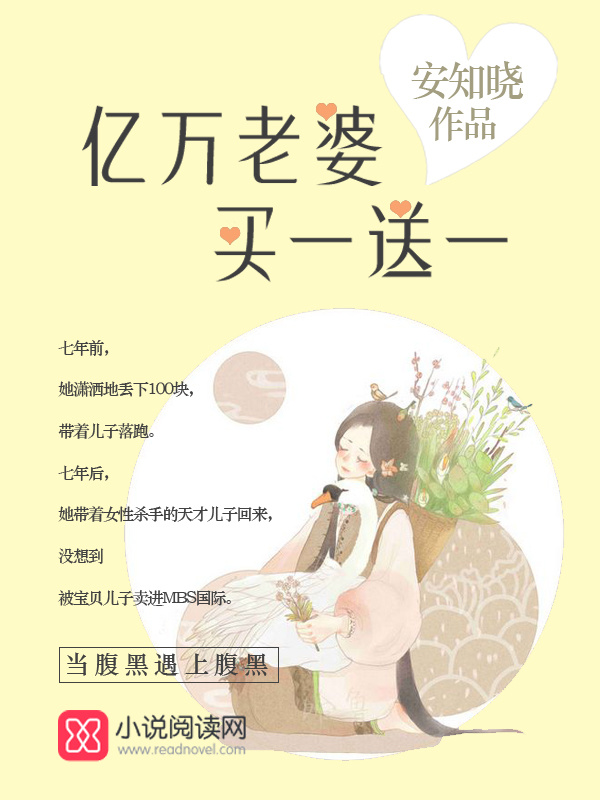 One entry per line
An Zhixiao
Calm Understanding
安知晓

Status in Country of Origin. One entry per line
891 Chapters (Completed)

Seven years ago, she freely and easily abandoned ￥100 and ran away, carrying her unborn son with her. Seven years later, she returned with the lady killer’s genius son, never expecting that her darling son would sell her out to MBS International. Unexpectedly, her immediate superior was the Mr. ￥100 from seven years ago!

Isn’t that too much for a buy one get one free bargain? The most two-faced couple, along with their two-faced son, staking their lives on the outcome…

These are recommendation lists which contains ￥1 Trillion Wife, Buy One Get One Free. You should give them a visit if you're looking for similar novels to read. Alternatively, you can also create your own list.
More Lists >>>

There's actually multiple main couples in this story, if there weren't I would have rated this story a bit higher. ... more>>
Spoiler

The first main story is about a one night stand that resulted in a child without either knowing each other's background or name. 7 years later, the female lead returns to China with her "genius" 7 year old child. With some underhanded manipulation from said genius child, the couple meet up again.
The original story line of this first main couple was quite amusing and interesting, however, it started to get darker and a bit more unbelievable. From involvement of terrorists, mafia, assassins, pedophiles, torture, and etc. Despite all the super action packed ridiculousness of the plot, both male and female lead were quite amusing. The male lead being super narcissistic and the female lead being super independent and sarcastic.

Probably my main gripe is that I wish there were more smut between the first couple, except that was reserved for the shorter stories in the other couples instead. My other gripe is that all the female leads in this story get tortured in some way or another that is really cruel and heart breaking.
After the first couple gets their happy ending, there are only minor cameos from them later on in the second half of the novel.
The second couple is between the first male lead's long lost sister and stone cold killer/hacker from the mafia. At first this couple was amusing because it had that "Mr. &Amp; Mrs. Smith" vibe where they were constantly physically beating each other up every time they saw each other. But then it got darker when the male lead takes the female lead and brain washes her. After this point, I lost interest in this couple because the female lead was too laid back to care, and the male lead was still insanely possessive in a not cute way. Because of this, I didn't particually like this couple, which accounts for the lower overall rating. Seriously, if you know the girl you like has a BFF that is getting tortured to death and don't do anything about it, how can you face your love interest. Along with the rest of the "suspend disbelief" plot, one of the stranger ones is the male lead's ability to do a complete personality overhaul with alcohol.
The third couple is the 2nd female leads BFF and partner. Due to some misunderstanding, she gets tortured near death by none other than the 3rd male lead. Despite all the misunderstanding, I ended up liking this couple more than the second couple, but I still don't think too highly of the male lead who is twin brother of the second couple's male lead. This couple truly went to the ringer of tragedy, and did get my teary eyed at many points. This couple's story line was more romantic and enjoyable than the second couple.

There are also some minor romantic story lines that get their own focus as well. A BL between to male characters in the terrorist organization that is quite cute. Another one is about the terrorist's leader, and the last side character couple is the parents of the twins from the second & third male leads getting their happy ending in the end.

The last main couple of the story is about the genius son from the first couple. Swearing eternal love to a girl he met briefly when he was 7 years old and sacrificed her life for him, he's on a mission to find her reincarnated soul. I have to say that this story is worst plot of the entire novel. It's got too many ridiculous elements that you can't even suspend disbelief. You just have to consider it pure fantasy. From a newborn speaking completely fluent after 7 days, goddesses, teleportation, and etc, it's just bad writing into a contemporary story line. This story completely sank my rating of the entire novel.

Well, if you're looking for romance, there's certainly a ton of romance in this novel. With lots of villains, action, and a multitude of characters that are not similar. Some couple's story lines are better than others, and some really stank. Other than some torture, none of the female leads were raped, and everyone ended up happily ever after. There are some details that should have been a bit more etched out, but like I said, you really have to suspend your disbelief that it's a contemporary novel, and pretty much assume everyone is talking the same language even if they're in the Middle East, China, Russia, Italy, and etc.

First chapter: Our female protagonist finds out her boyfriend is cheating on her with the town..."bus" and she find out from her boyfriend that he only dated her for a bet. Does she yell? Does she run out the door? Nope. Our cool protag asks for a cut of the bet money. XD Even though it was actually quite emotional for her she pulls it off so damn well, you have to give her respect.

[collapse]
Definitely one that has peaked my interest. Not quite a 5 (particularly as its just 1 chap) but I think some are misled by the recommendations and what to expect from this one, so a 5 to bump up the score. This is definitely not a Japanese harem ero novel (from suggested by the recs) but much more along the lines of romantic Chinese drama. <<less
9 Likes · Like Permalink | Report

like most novels with female leads. It usually starts to show signs of failure when the male side leads are introduced. For some reason in the chinese novels like these translators pick for us the male leads should be the MC with a strong female side (current MC of this novel) instead. That way we can actually like the male leads for being jerks just due to the fact most of the time readers like to root for MC just for being a MC even if they are jerks. These... more>> novel's males tend to like to strong arm the female or act in a way that the females should like them for being jerks. I tire of these novels for this reason that I mostly avoid all female lead novels. I just skim thru the first 30-40 chapters (this case 26 current chaps at the time.) quickly till a male lead pops to see if it is worth the effort to actually read. <<less
6 Likes · Like Permalink | Report

Rated 2 stars solely for the kickass MC. This starts off with the typical drama - nice girl finds out she's been betrayed by her friend and her boyfriend. Except this MC only looks like a stereotypical nice girl - she has enough backbone to stand up for herself and even deal with her shitty family situation. Without her, I would have rated this one star because all the men are just disgusting. They treat women like objects, mostly so they can relieve their desires and then discard them. Of course,... more>> I suppose the title is a pretty big warning sign of the author's bad taste. If this follows the stereotypes then the male leads will try to redeem themselves to appeal to the MC, but I'm tired of such shallow stories. There is also a rather significant plot point that requires suspense of rational thought - the fact that she never discovered the identity of the father of her son. There is even one point where she mentions she saw his picture in the news, but she didn't bother paying attention? Also, a talented professional would make a point of researching major players in their industry. So, no. Sorry to the generous translator - I love the MC, but I will not be continuing this. Wish you the best! <<less
6 Likes · Like Permalink | Report

Very interesting and hooked me in. The girl is very strong honestly to put up an uncaring attitude but really she still feels hurt. Good thing she doesn't hold him in high regard and then next chapter is getting so steamy!!!! I can't wait for the next chapter. Kudos to the translator for picking up a great novel and to the author as well. Definitely a must read!!
5 Likes · Like Permalink | Report

So far so good for this chapter. Though sad that the translation group have dropped it. And confused with spoiler that dunno true or not said that it become a confusing story? Where all character appeared randomly.
3 Likes · Like Permalink | Report

Its another novel where the MC has a genious 5 year old but this time the MC is likeable and can hold her own weight \o/
3 Likes · Like Permalink | Report
Leave a Review (Guidelines)
You must be logged in to rate and post a review. Register an account to get started.