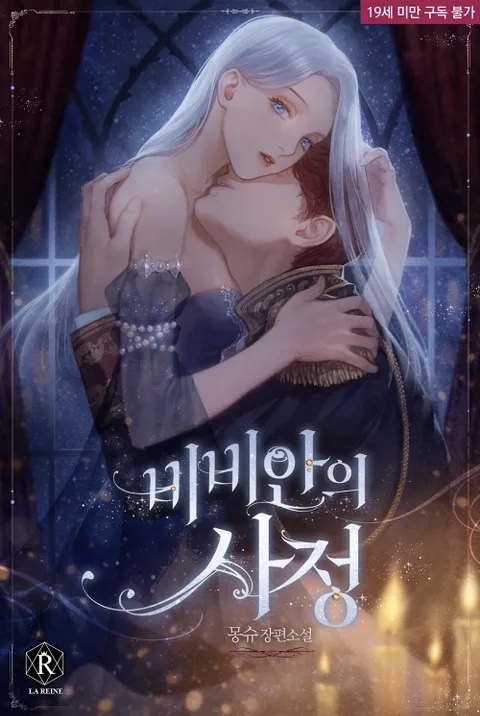 Vivian, the Empire’s only spiritualist.

She had an intimate relationship with a man who appeared in her dreams, while she was studying the art of spiritualism abroad for three years.

She thought she’d bid goodbye to her dream partner after she returned home.

“Ah, Father. The man behind His Majesty… Who is that?”

“Who are you talking about? Ah, did you mean Lord Orpheus?”

Sir Roger Orpheus, the “mad dog” she had heard of?

What should she do if they meet again?

No way, they won’t be able to meet again.

But, as if to laugh at Vivian’s delusional thoughts, the two slowly became tangled with one another.

“Are you alright, Young Lady?”

Even in real life,

“You know how to use honorifics while calling out, don’t you?”

Even in her dreams.

These are recommendation lists which contains Vivian’s Circumstances. You should give them a visit if you're looking for similar novels to read. Alternatively, you can also create your own list.
More Lists >>>

For a smut novel, its' smut scenes were way too dry and repetitive: Vivian opens her eyes in the dream, Roger starts groping, "mph, hah~", Roger proceeds to either " exchange saliva" (tf is that expression bro I can't even-) or "suck her petals" and other flowers, she comes, he rams, woke up then rinse and repeat the previous chap 2 chaps later. Not to brag or anything lol, but I've read considerable number of smut, this is just meh. On the side note, I like proactive whamen, this gurl here just accepts... more>> whatever comes fort? Yeah, Roger keeps repeating that she has a great talent for seduction when the most she does is shaking her waist a little but hey, who am I to judge their s*x life lol? All flowery language bore me to death so -1 for translation, -2 for boring smut: 2 stars. <<less
4 Likes · Like Permalink | Report

I'm really enjoying this. The smut is well written and both sides are consenting (so hard to find that). Both main characters are quite likeable and even most of the side characters are likeable. The interactions between all the characters can be pretty amusing at times. I'm curious what the deal is with the dreams, but I feel like that's going to be a slow reveal. Not a lot to say about the plot at this point - it still feels like the stage is being set somewhat. I suspect... more>> when they get to the demon subjugating (or whatever it was called) that they're getting ready for is when the plot will really start to get interesting. 4 stars for now, but will revisit later. <<less
6 Likes · Like Permalink | Report

The story is interesting and the FL is smart and strong girl ❤️ and the mysterious relationship between the ML and FL is the best 👍🏻 I lOVE THIS STORY
6 Likes · Like Permalink | Report
Leave a Review (Guidelines)
You must be logged in to rate and post a review. Register an account to get started.

The Other Side of The Doll's...