Novel Updates
RegisterLogin
Theme
Search
Your changes has been saved.
Advertisements
The Villainess Will Crush Her Destruction End Through Modern Firepower 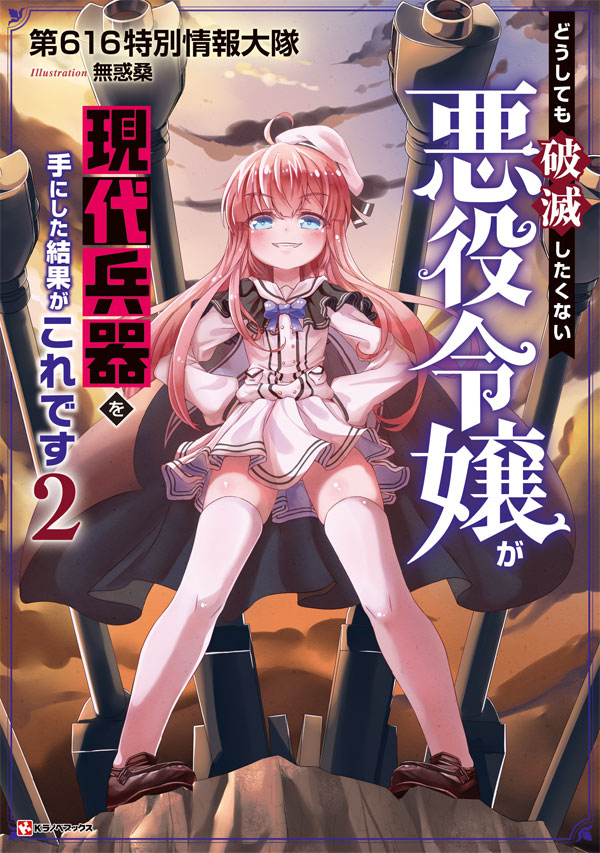 One entry per line
第６１６特別情報大隊

One entry per line
無惑桑

And what’s more, she’s what people refer to as a ‘villainess’.

In the game, the villainess is destined to face a destruction ending, but this girl is different.

If you don’t want to be destroyed yourself, you have to destroy them first!

In this way, our protagonist who is obsessed with recreating the power of modern weaponry using magical techniques by taking advantage of the magical talent bestowed upon the villainess, realizes it at last.

The heroine? The prince? Shaming her family? Being exiled from the country?

If only a bad end is destined for her, then she has to crush it through sheer firepower!

Youjo Senki (5)
Demon Noble Girl ~Story of a Careless Demon~ (3)
I Got Reincarnated And Mistaken As A Genius? (1)
The Male Lead’s Villainess Fiancée (1)
Return of the Female Knight (1)
Maria from Hell! (1)

These are recommendation lists which contains The Villainess Will Crush Her Destruction End Through Modern Firepower. You should give them a visit if you're looking for similar novels to read. Alternatively, you can also create your own list.
More Lists >>>

Actually it's a fun story that might deserve a 4 star, but due to a desicion made by the author I'm dropping it into 2 star. If you don't mind the parts I don't like on the spoiler, it's pretty entertaining and short to read (it depends on how fast the translator works though).
... more>>
Spoiler

As an action fantasy story it's fun, there are some pretty decent action scenes and the MC's personality on the action side is hillarious. There's magic, but as the title stated she mainly used modern firearms for combat with magic as support.

The otome side though... Initially it's not that bad, but halfway through the story it becomes annoying due to how the author building the conclusion. The author take a lot of time to build supporting characters romance but neglected the MC's side. The supporting character pairings have decent time to develop the chemistry while the MC's just abruptly end with happily ever after without any major interaction between them. To make it worse, the author spent much more time to develop the stalking horse than the actual male lead, with MC interacting more with him and there's actually some good scenes with them.

TLDR: fun action isekai, but a failure of romance genre.

This series is very new so please take everything with a grain of salt. It’s an ok story with an original premise but I don’t think it’s to my tastes. MC is a college freshman who is also a gun/army/weaponry junkie in her past life! To avoid her destruction end, she enters the world of magic and is gonna blitz fate with her modern day weaponry! Character wise, MC is a hyper-active, hyper happy loli whose obsessed with gun/modern weaponry creation. In a way, she’s a bit psychopathic (eager to shoot... more>> anything; be it targets or people.) in a good way. Since it’s so new, there’s really no one else to comment on, besides the fact that the first few chapters are world building so it’s a little boring and her teacher is very oblivious (wow an explosion? Massive fireball? You saw em in a dream? Ok). I think if you liked the idea of a loli protagonist kicking ass with firepower in Youjo Senki, you’ll like this story. MC is a more hyper, childish version of Tanya and where Tanya is obsessed with being a good subordinate/end game retirement, Astrid (MC) is obsessed with creating/using firearms. <<less
9 Likes · Like Permalink | Report

The premise alone had me hooked. The series is still new, so there's not much to say definitively, but it seems fun so far. Not much has happened yet, but the MC's narration is energetically obsessive enough to keep the hype going.
8 Likes · Like Permalink | Report

I gota say its just allright. Another thing is although the plot is based on a love game, romance is about 15% of story and quite admire that since romance is hard to be done properly and most web novel authors are quite incompetent in doing it well. OVERALL A GOOD LIGHT READ DURING THE QUARANTINE.
3 Likes · Like Permalink | Report

It's okay I guess. The premise is interesting, the characters are fun, and I love reading overpowered main characters, it's just that the plot progresses really slowly. 30 chapters in and she just got to middle school. With this pace we will never reach the climax of the story.
2 Likes · Like Permalink | Report

hmm if you want to read this novel then read it without any high hope of its badass or romance side of this novel, I mean what you read on prologe is literalry MC destroying neighborhod country who start war with her country, its badass its OP but after that she just shuted-down by some underground-orgnization and willingly submit and see the heroin happy with the love-target and the end. then why 2 star? It coz MC is overly paranoid, the title is telling all we need to know about the... more>> ending in overly-streched measure, if she want to avoid ruin then just dont bully the heroin and the story would be end the same for MC to avoid ruin. <<less
1 Likes · Like Permalink | Report

I am surprised I like this. While the premise is something I am a fan of. It's the fact that they tend to go into detail about how magic works and that's something that bugs me in stories. I don't see a point in them going into so much detail about Magic works, It's a fictional subject and it takes the excitement out of stuff. But this story manages to keep me really interested I am a fan of the Mother and want to see a lot more of her. I... more>> also love that the MC isn't afraid to kill, That could easily ruin things if the MC didn't want to kill but the story was about her making weapons of Earth. Overall I really like this one and is probably my favorite of the three stories I read from the TL that day. Edit: Well, Maybe second right after "Do You Think Someone Like You Can Defeat the Demon King? " <<less
1 Likes · Like Permalink | Report

Hahaha, 😂 in the first chapter I was really shocked by the main charakter who was truly amazingly terrifying and very unexpected 😆 she really passed common sense
1 Likes · Like Permalink | Report
Leave a Review (Guidelines)
You must be logged in to rate and post a review. Register an account to get started.

Reborn as a Symbiote
Advertisements