Novel Updates
RegisterLogin
Theme
Search
Your changes has been saved.
Advertisements
The Creator God Was Enslaved by Her Yandere Sister

Home >
Novel >
The Creator God Was Enslaved by Her Yandere Sister 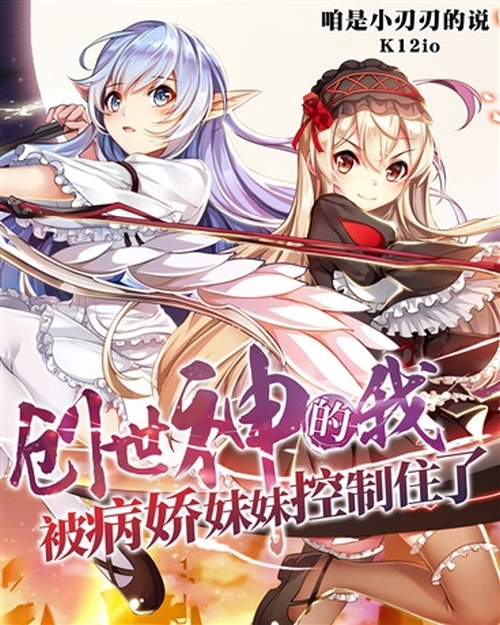 Status in Country of Origin. One entry per line
1286 Chapters (Ongoing)

After getting killed by my yandere little sister, I am reborn in an RPG world. Moreover, it is the RPG world I programmed and wrote the script for. As the author of the game, I must definitely be omniscient and omnipotent… but wait? Why am I born as a baby girl? Hey, that’s not how the script goes! Is this a mistake? I am a man!!

Demon Sword Maiden (1)
Hero’s Redo ~ A Hero That Once Saved the World Reborn as a Girl ~ (1)
Reborn as a Transcendent (1)
Reborn as the Hero’s Daughter! Time to Become the Hero Once More! (WN) (1)
She Professed Herself The Pupil Of The Wiseman (WN) (1)
My Brother has Turned into a Loli (1)

These are recommendation lists which contains The Creator God Was Enslaved by Her Yandere Sister. You should give them a visit if you're looking for similar novels to read. Alternatively, you can also create your own list.
More Lists >>>

TLDR: it's pretty bad. The characters are completely unrelatable. The premise just makes you wonder what rock the target audience hides under. Translation 5/5 Readability 5/5 Characters 1/5 Plot 1/5 World building 1/5 Take my chapter number with a grain of salt. After about 30 chapters I skipped ahead at about every 5-10 chapters. To see if it got better. While the MTL was readable, the novel never improved
17 Likes · Like Permalink | Report

The title is misleading, everyone came here for the wholesomeness, yet we were given tragedy for the first few dozens of chapters. That basically sums up the low rating of this novel. I've read a few reviews on the original source and came to the conclusion that the "Happy" in the title is probably meant to be ironic and not to be taken literally. This novel is meant for the sadist, if you're here for the fluffiness, you might be in for a huge disappointment. I recommend you to stop right... more>> now. Other than the initial disappointment due to the misleading title, the story itself is still somewhat appealing as of right now, at the very least, I am interested to find out where the author will be taking this story. <<less
7 Likes · Like Permalink | Report

I agree with kawaii12345, I was wondering if her situation ever improves or reaches whatever this character reference sheet even talks about. But halfway in ch 37, I'm feeling too tired of MC's dead mood and stockholm syndrome and decided to check the comments. Idk who recommended this to the translator. If overpowered FL can read MC's mind, why did she not figure out MC's reincarnated lifestory yet by now? Like get me some realization and fluff by now. Thanks kawaii12345 for saving me from trying to go through more google... more>> translate to figure out if worth continuing or not. Edit: Would be better if the format was a manga or more visuals mixed into it. The format wouldn't help the story pacing any better, but it would be a better NSFW story (aka faster to skim and get to the juicy parts). It's less gratifying to read with the current format. Probably due to censorship as a CN, I did read those bite scenes, but didn't last long enough for me to feel about it. Those scenes didn't grab my attention enough to want more. There are illustrations to it, but since it's not mixed in with online chapters, the story fell flat. : <<less
6 Likes · Like Permalink | Report

How should I describe it? As of now, it's kind of like s&m lesbian softcore p*rn with loli elves and loli vampires. But without explicit r18 content. Now I will describe the plot
Spoiler

We have Mirabelle, a vampire princess who used to be a male game developer from Earth. Then we have Heather, a vampire noble who used to be Heather's yandere imouto in her previous life. Though whether she kept her memories or not is under question.

Vampires ens*ave all other races. They are powerful, numerous and evil. Mirabelle ends up being ens*aved and then promptly bought by Heather.

Then we have several chapters of abuse.

So far, that's the whole story.

Oh, have I told you that the reason Mirabelle ended up ens*aved in the first place was because she needed medical supplies for her surrogate mother on the verge of death? She's probably dead by now...

[collapse]
Overall, it's not an inherently bad story. I'd give it an objective rating of 4*. Not excellent, but can be enjoyed. Not for most though, the novel is a bit of an acquired taste.
5 Likes · Like Permalink | Report

Not for the faint of heart readers since the story is (1200+ in raw) and the beginning of the story is pretty dark and I say it kind of goes around my alley and also things like this is just my favorite while I do like all kind of plots and anything, and I already have kind of read a few things such as like this MTL version is barely readable so I didn't venture into the unknown here but let's just assume that protagonist will escape maybe around 200-400+... more>> but since the theme of the story from the start is very dark and in the early chapters the protagonist is kind of accepting his/her fate as sl*ve of the vampires, let's assume that it won't likely come to those casual readers or didn't have taste like mine that the protagonist will have to be entangled in some kind of mess that is very dark or even darker as the story progresses so without further ado as early as of now unless you're either a casual reader or an avid fan of web novel but "DIDN'T" have kind of taste in a story like this I suggest you stop reading this novel, also my review is 3 stars because I missed click it and ratings should be 4 stars P.S.
I am telling you this early since with varied knowledge of novels and wuxia novels this kind of story will just make you lose interest in reading novels, so as to avoid having that situation escalates thus the warning, don't get me wrong I would like for others to support this but having read the chapters I concluded that is not for the faint of hearts and such please support the author or the translators of the ones you are currently reading, I've been a supporter since been to Japan to read novels (Light novels) and also I read English novels (not anime related novels) <<less

Definitely an acquired taste. I didn't read the reviews here and had a really hard time reading through it. Each chapter I just keep feeling more pitiful hoping things would go the way the MC wanted, but it didn't. I don't know why I kept reading.
1 Likes · Like Permalink | Report

The story follows the brother who reincarnates as the Elven princess Mirabelle who becomes the bloods*ave of the Vampire princess Heather who happens to be the reincarnation of his sister who was yandere for him. Mira understandably hates and fears vampires for enslaving her kind and killing her family but is confused by the obvious stockholm attraction she has to Heather. Mira is obsessed with escaping the vampires due to her fear of them but is slowly starting to accept her place as a blood s*ave as she loses hope.

Ok. First I rate this low because this is not my favorite type of novel (i will still read for the yuri and the genben though). If you want a novel that have a (pure heart ?) loli girl (man previously) being hunt by other girl (not sure ?), here is your find.
0 Likes · Like Permalink | Report
Advertisements
Leave a Review (Guidelines)
You must be logged in to rate and post a review. Register an account to get started.