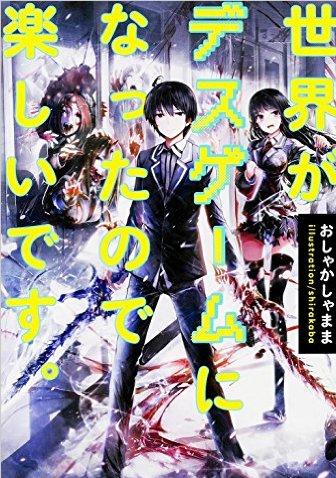 One entry per line
おしゃかしゃまま

One entry per line
Shirakaba

Is it considered murder if one were to kill a corpse that has revived? Would it be a crime?

The dead have reanimated and are now hunting them. This is the fiction like zombie scenario that the protagonist has encountered.

For the sake of survival they must kill the people who have became zombies. From inside his head, the protagonist hears『tatata-tah』.

From somewhere, a sound could be heard. He leveled up.

Zombies or not, this game like world is fun. He decides to continue……

For the sake of surviving, the people that have become zombies must be killed. He must decide who to revive and who to kill. From among the dead, he will select the ones to be used. And thus, they had begun to believed that the existences of their loved ones had truly changed.

In this alternate universe the thoughts of varies people being to stir.

One entry per line
Because the world became a death game, it's fun.
世界がデスゲームになったので楽しいです。

These are recommendation lists which contains Sekai ga Death Game ni Natta no de Tanoshii desu. You should give them a visit if you're looking for similar novels to read. Alternatively, you can also create your own list.
N/A

If you got hooked by the synopsis, don't bother. This is a Hikkikimori's fantasy wank tale with the usual MC not being able to kill ANY females at all, eventhough they're trying to kill him. Don't care if they're a zombie, or mutated being, or a spawn of satan. Nope, no killing. Males on the other hand, deserve to die cruel deaths 'cause they have dangly bits between their legs. Also, as usual, the MC has the 'bestest powwwwaaahhhh eeeevvvvaaaaah!!' that helps him to overcome every single bad situation. Seriously,... more>> his power is god-like. <<less
28 Likes · Like Permalink | Report

Who is sane enough to see beautiful undead girl naked and well just nod and say "o look they are beautiful" I was like just have s*x with them already!...

His Bias view of the world is ok in Kill the men and spare the woman but in the end MC just became another hypocrite because of this a living person died..

I love survival and game elements novels, but this is... hikikomori class? Really... Ohh you can win item in a lottery ?Ohh all items that I won are op... PS: The MC can't kill "zombie girls" cuz they are beautiful, so he just use his cheat to made them obedient. He is a pervert but remember this is a jp novel so the MC is dense.
7 Likes · Like Permalink | Report

It starts out ok. Then turns out into a silly personal fantasy with forced emotional situations.
6 Likes · Like Permalink | Report

Im a big fan of game element and survival stories so this could have the basics of a good novel, but that is yet to be seen, so far its walking the line, the evolution of strength and good plot setup give it potential; however the other reviewers are right it seems like this novel might not see fruition of its true potential as the MC seems to be an author's fantasy character existing mostly to justify the writer's ridiculous and Naive ideals of hypocritically never attacking women even if... more>> they are zombies trying to kill him while using his absurd "hikikomori" powers to sexually perv out on the collected reanimated corpses of the same "women" who he refuses to fight - It seems as if the author incorrectly imaginines that his fantasy avatar is filling some chivalrous ideal by never fighting women while sexually puppeteering their bodies. Also why is Hikikomori a class? With the power of arrogance? I mean that's fun and new but the way the author plays it it seems more like the writer just wanted to justify his own shut in lifestyle. Regardless of its faults its never good to write off something with poetential too early, waiting to see how this novel grows as it advances. <<less
3 Likes · Like Permalink | Report
Advertisements
Leave a Review (Guidelines)
You must be logged in to rate and post a review. Register an account to get started.