Novel Updates
RegisterLogin
Theme
Search
Your changes has been saved.
Advertisements
Saeki-san to, Hitotsu Yane no Shita: I’ll have Sherbet! 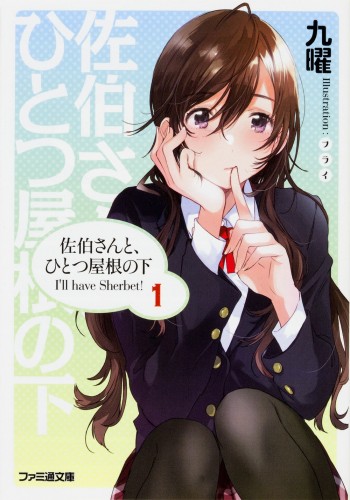 One entry per line
Kuyou
九曜

One entry per line
Fly
フライ

Status in Country of Origin. One entry per line
5 Volumes (Completed)

Entering 2nd year of high school, Yumizuki moved to apartment because 2 hours commuting from home was tiring. However when he and the delivery company reached the apartment, another tenant already started to move to the apartment he supposed to stay. A beautiful girl who just returned from America, Saeki Kirika. Because of their personal circumstances none could concede, and then Saeki propose to share the apartment…

One entry per line
佐伯さんと、ひとつ屋根の下 I'll have Sherbet!

These are recommendation lists which contains Saeki-san to, Hitotsu Yane no Shita: I’ll have Sherbet!. You should give them a visit if you're looking for similar novels to read. Alternatively, you can also create your own list.
More Lists >>>

The relationship drama in this makes absolutely so sense and it's shallow even by romance WN standards. The MC broke up with his GF after 3 months (which he obviously didn't, or he did but it was for his GF's benefit) and now everyone in the school distrusts/hates him and spreads rumors? Lol. Also the MC is edgy and uncommunicative for literally no reason. He could fix his situation in a few words, and I assume his ex-GF could as well. The writing is super lazy. Also he has almost... more>> no personality traits, and the FMC is aggressively into him for seemingly no reason.
Spoiler

Later on in the story there's some incredibly s*upid drama that made me drop the WN. The FMC goes back to her parents, completely ignores the MC, and starts hanging around another guy 24/7. Her explanation for why she did this is because she was embarrassed to be around a male friend, essentially. This went on for weeks and the only reason things went back to normal is because the MC talked to the guy and the guy said he would give her back. MC wasn't even mad at her, sh*t is too dumb for my tastes. Poorly written drama for the sake of it is unnecessary,