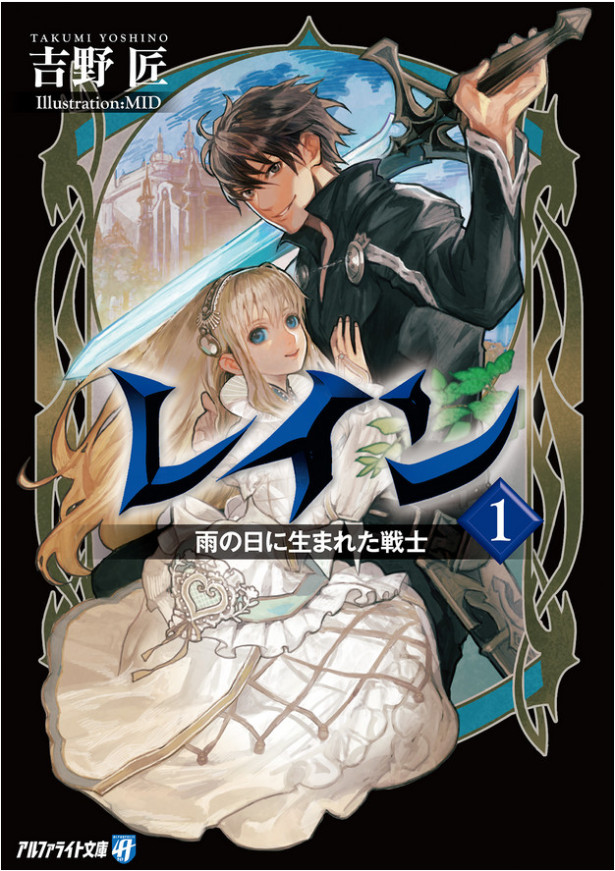 Status in Country of Origin. One entry per line
15 Volumes (Discontinued due to author's death)

Murgenia —a land from another world.

Yet to be influenced by the shadow of the Scientific Revolution, the people continue to pass down the ancient vestiges of magic.

It is a world ruled by sword and sorcery—

A long, long time had passed since the great war that had engulfed the whole land of Murgenia.

The fragile peace that had kept the balance in the land was now heading towards its demise.

Zarmine, a large country in the northern regions of the continent, had been reborn with the coming of her new king.

Unsatisfied by the small power he wielded, he now burned with a desire to conquer the world.

Under orders from the strongest king, the Dark Army invaded and spread the flames of war across the land.

Sunkwoll, a small kingdom located in the southwest, was one of Zarmine’s targets for invasion.

Her national power was not even a tenth of Zarmine’s. Morale was at an all-time low.

Furthermore, her current king was excessively favorable towards the nobility. The people had already lost their faith in him.

The end of the small kingdom of Sunkwoll seemed inevitable.

One entry per line
レイン

These are recommendation lists which contains Rain. You should give them a visit if you're looking for similar novels to read. Alternatively, you can also create your own list.
More Lists >>>

One of the most Amazing and Adventures Fantasy story really liked it a lot worth reading manga and novel series.
27 Likes · Like Permalink | Report

Good series, manga too but the Author passed away a few days ago. RIP. Hopefully this story can continue by someone & continue translated it.
17 Likes · Like Permalink | Report

EDIT: in honor to show my appreciation to the late author, I decided to make an even more comprehensive review. May he Rest In Peace. ... more>> Rain is your classic op swordsman in a fantasy world. In a way it reads akin to a classic fairy tale, our protagonist is bombastic, confident and has the power to back it all up. He's the champion protector of a princess who has her own secret powers, and looked up to by almost everyone. Setting and plot wise, it's a very lovely read. The characters are lovable, and the sheer swagger Rain has makes it hard to not admire him. The world that the author created is also very well written and immersive. The plot line could be considered a little cliche, as Rain and his gang build up their empire and proceed to fight against the demon lord who seeks to conquer the humans. As well written as it is, it's not without it's faults. Starting with the obvious, it's a classic fantasy storyline that has tropes that have been beaten to death. Rain's so OP, sometimes you have to wonder why even bother with the rest of the characters when Rain can and will personally stomp his way through every problem. Because it was one of the first stories to ever use these types of tropes, it can get boring really quick. Overall, it's good, but definitely shows it's age. Honestly your level of enjoyment would rest on whether this is your first novel or 39th novel. This rocked my world at the age of 11, not so much now that I'm in my 20s. I still think you should give it a read, and see for yourself if you like it or not. <<less
15 Likes · Like Permalink | Report

How can I put this... it's a novel that definitely shows its age. It's not Rain's fault that it came out so early. But the thing with a prototype/classic is that if you don't read it first, you'll inevitably be biased against it since it will have the "same old cliches", but not as well executed (since the whole point of copycat fantasy stories is doing the same thing but better, building on their predecessor's works). What was new and thrilling back then has become status quo or tired now. I... more>> found myself thinking that the story was a bit too predictable, a bit too thin, a bit too disappointing - because I kept comparing it to similar works that were likely inspired by Rain in the first place. If I had read this first, back when I was younger and inexperienced, then I would have probably loved it. TL;DR: An excellent introductory novel, not so good if you're reading it after a few dozen generic fantasies and Isekais. <<less
12 Likes · Like Permalink | Report

Definitely a must read! I have been a fan of the manga for years and now that the light novel itself is being translated makes me happy! This story has dragons, vampires, knights, prince and princes so why don't you try and read it? ;)
10 Likes · Like Permalink | Report

What can I say. I am writing a novel and Rain is making me edit all I have written to follow its style. I have finished all three volumes translated and may I say it is wonderful. The story is nothing new but they it is written my an amazing author. I actually quite like how basic the story is because it allows for it to breath out the characters more. I felt like I knew them all and cared about them all in some way or another. Needless to... more>> say it is a great story I would highly recommend. <<less
4 Likes · Like Permalink | Report

Rain is one of the best story I read among isekai and fantasy genre. The story is something like "protecting the princess", it is an old kind of plot that is the most common story even in children's book. But the strength of Rain didn't lies on it's plot, but on how it is executed and written and in it's characters. Cliche is not bad, writing a cliche story might make a better piece, but it's a "BETTER STORY" so what's your looking for? Though it sometimes result of a story... more>> that looks like third rate imitation because of poor writing. If you didn't like what you call cliche in story, it means that you had enough on this genre or plot and really just poorly written without adding good flavor. Rain has a calming atmosphere when I read it, whether in manga or light novel. The author did well in executing the plot. The story of each character is so interesting that even if he change perspective, you won't be bored. This isn't a story about wars between kingdoms, nor a story about adventure of the characters, it is a very simple story that became a masterpiece through interesting characters with interesting backgrounds. Our main character Rain is an ideal character that is not like a "hero who protects justice", he has a deep character which make him have a very strong presence in the story. Well wrapping it up, this is a good story, a simple one that have a not simple characters, as most of them have their presence in the story, because it's very well written. The translation is also good, and didn't bother use difficult words and difficult form of sentences. Though if you already graduated or stop reading isekai or fantasy stories, then you might find it boring, but those who still, I recommend to read this very good story. <<less
4 Likes · Like Permalink | Report
Advertisements
Leave a Review (Guidelines)
You must be logged in to rate and post a review. Register an account to get started.

The Sound of Rain [Completed]