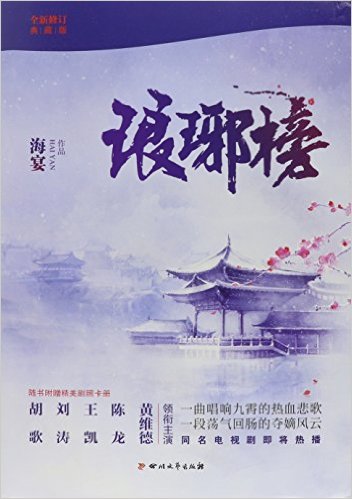 Status in Country of Origin. One entry per line
174 Chapters (Completed)

The East River Alliance is the world’s biggest clan. Its chief, Mei Changsu, arrived at the royal capital Jinling under the alias of Su Zhe. He brought with him storms of disturbances and fogs of mysteries.

A noble young master with dual identities, a Crown Prince and Prince Yu battling for the crown, the empire’s greatest warrior with the Royal Guards in his grasp, a beautiful princess who commands over the border’s cavalry…

Amongst these distinguished and powerful people, how did the inconspicuous Su Zhe become the heart of everything?

Could the hand behind the scenes of the whirlwind be the remnants of a previous storm?

Is he the young general who pursues enemies in snowy nights, or the shadowy tactician with a sickly body who won’t see old age?

He returns to the old place and reunites with old friends. He plots and schemes. What is he trying to achieve?

This is a story of dark conspiracies and brotherly bonds. Before this story reaches its end, perhaps you can change its course…

These are recommendation lists which contains Nirvana In Fire. You should give them a visit if you're looking for similar novels to read. Alternatively, you can also create your own list.
More Lists >>>

Oh god this is probably one of my all-time favorites. I gotta say, I became fan because of the drama (which is absolutely stunning). The drama version has been a phenomenon in China, even earning many fans in other Asian countries and overseas as well. So I'm really surprised this hasn't received more attention from people on NU. It hasn't made into an acclaimed TV series for nothing (for those interested, there's a complete subtitled version on Youtube if you search for the novel's name) We've got an actual strategist MC.... more>> And by intelligent, I do mean he is intelligent. Not the genre that's smart only because others a re d um, but because he outsmarts others. The overall plot is rather straightforward imo, however the MC uses really great strategies to accomplish his goal. The plot does not bend over just to support him; in fact he is the one controlling the flow of everything. The strong point is in the foreshadowing; all along the author keep leaving information that you think are trivial, however they are actually hints on what actually happened and are crucial to the story. Everything is well wrapped up, and you can tell that the author put a lot of thoughts into it, rather than have a never ending filler like so many CN have. The series gave me the feels so many times; I can't remember the last time I felt so strongly about any series or fandom and trust me when I say I have seen my fair share of series.
Spoiler

The end was also a rather satisfying end. I won't spoil anything but you have my guarantee that it is a n end that suits the atmosphere and personality of the MC so well.

[collapse]
I think what got to me was the character interactions. You get so attached to all of them. Even the minor characters. They shine so much, and are all characters with their little quirks and their own character development. They are also important to the plot because sometimes the smallest of character can make or break an event. My only issue is that the MC is probably a bit of a Gary Stu, but I don't think anyone really cares that he is at this point haha. I do hope to see a translator re-pick this up someday, as I believe it would really be a shame to ignore such a gem. <<less
11 Likes · Like Permalink | Report

Read the first 13 chapters, got so into it that I jump straight for the drama. So far, it's really good. The previous summary for this had some spoilers but it's nothing major as it's revealed pretty early. A story about a man whose family got betrayed and killed, but he survived and after assuming a new identity, he comes back for sweet revenge. The characters are unique (Fei Liu is so cute) and the story is comprehensive despite being rather straightforward. If the machinations and schemes of the novel are... more>> the same as the drama then I must give it a thumbs up! The story is engaging and the new translator is doing a wonderful job. Check it out! <<less
7 Likes · Like Permalink | Report

Truly a masterpiece tragic drama about brotherhood, justice and revenge. Unfortunately I gave up on it because, at least for me, its depressing and hurtful to read as I place myself in the MC place.
5 Likes · Like Permalink | Report

Nirvana In Fire aka Lang Ya Bang is one of the best or not the best historical, strategist sort of novel I have read/watched. (I watched and read both the drama and novel.) Watched the drama last year and just had the time to start reading novel a few days ago and finished reading this masterpiece. It tells the story of our MC Mei Changsu aka Su Zhe. This novel is one of revenge and justice, a revenge that our MC seeks so that justice is sought for his people. But... more>> apart from revenge and justice, it is also one of doing whats right. What truly make this novel sparkle is that... amidst the revenge, our MC is not blinded by revenge. Even when he was on his conquest for revenge, even after all he had been through, he did not forget about who he was, who he was from, and did not trample on the innocents and spill the blood of innocents just so that he can get his revenge. This could be seen especially in the end part...I wont spoil it, it is better to read it for yourself. (Truly put a tear in my eyes) For the other parts like character interaction etc, do read Keimichi's review, his review is really good and expresses what I want to say. Although the novel/drama is much better if you understand Chinese, as quite a lot of translation will most likely be lost in the translation, but I still highly recommend everyone to read this master piece of a novel. At the same time, go and watch the drama too. (There is eng sub for the drama) I give this novel a full 5/5. <<less
4 Likes · Like Permalink | Report

If you enjoyed this novel I highly recommend watching the drama as this novel is complete crap compared to it. However, if you can read Chinese (why are you on this site), read the novel because it is one of the best CN novels out there. The thing about the English version is that many of the poetic phrases that make this work what it is are lost in the translation. (Btw the show is great just watch it already) TL;DR 10/10 novel, but the prose doesn't translate well, making... more>> the English version lackluster <<less
4 Likes · Like Permalink | Report

Recently, manga began to be translated into my language, but in the heat they indicated senen-ai. I looked at the drama, but I didn’t see any hints. Is there a senen-ai in the novel or not? I heard that the author cleaned everything up (if someone read, tell them to pair).
0 Likes · Like Permalink | Report

I was so excited to find these translations and they're all pretty high quality translations too. I started off with the drama which is an absolute must watch! It was hard to get into because it seems slow at first. But things really build up and especially on rewatch you see all the little things that come together to make an amazing plot (i've watched it at least five times now and it gets better every time). A lot of people have compared it to Monte Cristo. And it does... more>> have that sort of flair with a stronger emphasis on brotherhood and justice. <<less
0 Likes · Like Permalink | Report
Leave a Review (Guidelines)
You must be logged in to rate and post a review. Register an account to get started.